Q: What do you think is the most important thing youíve accomplished out here this spring?

A: I think a few things. We started to establish our identityó without padsó but sound, smart and tough, committed to discipline and poise. We know what it looks like now. We had a chance to sit down, we had a chance to define it and lay the foundation for when we do get the pads on.

Q: How would you describe the identity?

A: Sound, smart and tough, committed to discipline and poise.

Q: Will you speak to them again before they all leave here or is that done with?

A: No. We had a meeting last night, we had one before we left this morning, and we just had another quick one on the field. The veterans have taken the bull by the horns. Coaches obviously have had their thoughts. This is a key time for every club in the league right nowó you build to this point. We feel that we could put pads on, give them a couple days off, put pads on, go out and practice for a couple weeks and be ready for the first game. But thatís not the caseó they have a little ìprep-cationî coming up. They can prepare for whatís coming down the road and we hope they all make smart and wise decisions.

Q: Have you trademarked that [term] ìprep-cation?î

A: Prep-cation? No, but thatís a good point.

Q: There are many examples around the league and here of guys not making smart and wise decisions during this off time. Does your anxiety over that go up a little bit now that youíre the head coach instead of the coordinator?

A: No, I think we have a good locker room. We have a strong locker room. I trust them. We educated them. They were listening, they were paying attention, theyíre buying in. Theyíre excited for this upcoming season and I feel weíll make good decisions.

Q: How big of a year is this for Devon Kennard to kind of establish himself?

A: Itís a big year for everybody. Itís a blessing to be in that locker room. Itís an honor, and everyone has the opportunity to make a huge impactó heís definitely one of them.

Q: You have a bunch of new guysó Jasper Brinkley came backó but a bunch of different guys at middle linebacker and a lot of new guys there. How much closer or are you any closer to knowing what you have there and possibly knowing what the plan is going to be when the season comes around?

Q: Would you like to have a guy that could be out there all three downs or are you okay going with packages? Like we see here when you run first team nickel youíre having Casillas and Kennard out there at times or guys that arenít necessarily middle linebackersÖ

A: I think itís important that by situation we have our best 11 on the field. Period. So it doesnít necessarily matter if itís the same guy at all 11 spots. Itís a situational league now, so you have to be smart on who you use and how you train them. And again, itís up to us to put the best 11 players on the field to win the situation.

Q: What would you say your level of interest is in adding an offensive tackle?

A: My level of interest? Again, we look at all possibilities. You never say never in this business, and if we feel one is out there that can help us, weíll look into adding him to the mix.

Q: And how accepting or reluctant would you be to move a guy like Ereck Flowers, who has only had one year, if somebody would come out and be more of a left tackle?

A: Thatís a hypothetical on a hypothetical, correct? Iíd rather not deal in hypotheticalsó especially when there are two of them in the same answeró but Ereck is working hard to develop into a standout left tackle for us. We feel heís making progress, and he had a good offseason.

Q: Several players said that they lost weight and trimmed upó is that something thatís part of your evaluation of the team? Did you want certain guys to maybe get leaner or is that just something they did on their own?

Q: Whatís this offseason been like for you? Has anything come up that sort of surprised you in your new role?

A: I blinked my eyes and it was over. Very fast, very fast. Tough to slow things down in this business.

Q: Is there anything that excited you in this minicamp or OTAs? Did anything surprise you from the players?

A: Iím in a constant state of excitement right now. Everything is exciting,. Anytime you get a chance to get the players out here on the field and get better and grow, itís an exciting time.

Q: What has Roger Lewis been able to show you the past couple of weeks?

A: Roger Lewis? He comes out of a system that is not necessarily a pro-style system. He was well-coached in collegeó that [spread offense system] doesnít mean he was not well-coachedó but he was well-coached in college. His system is not necessarily what weíre throwing at him. Weíre throwing a lot at him right now. We gave him some opportunities to run with the first group today and a little bit yesterday, and heís taken full advantage of it. Heís a guy that has a chip on his shoulder, doesnít say much and goes about his business the right way. Heís business-like and we like that about him. We feel he has a skillset that we like and we can work with him.

Q: When you give your ìprep-cationî talk to the guys, considering what happened last year with Jason Pierre-Paul, do you think it resonates more with guys in this building because you know the kind of shock that can come on what you guys endured last summer and how it kind of framed the entire season?

Q: One of the guys that is a free agent that we were talking about with the offensive linemen is Eugene Monroeó heís been out there as an advocate for medical marijuana. How do you, as a coach, view that, and is that something that would be troubling to you?

A: I think everyone is entitled to their own opinion. Myself, I havenít done any research. I donít have a great answer for you there. Thatís probably more of a political questionó something that Iím not necessarily willing to jump into at this point, or ever. But every player, every coach, every person with two feet running around has their own opinion and is entitled to it.

Q: Youíve talked about Roger Lewis and his systemó for a receiver who plays in a college spread, how difficult is it for them to transition to a pro style?

A: Itís a huge transition. The advantage that Roger has going for him is that heís willing to work at it. He keeps his mouth shut and he listens. He takes his coaching, and heís well-coachedó Adam (Henry) does a great job with him. And heís around a veteran quarterback whoís interested in spending time in developing young players.

Q: Is it the route tree thatís the big difference?

Q: Do you have any problem with a player expressing his opinion on medical marijuana or any kind of controversial topic like that? 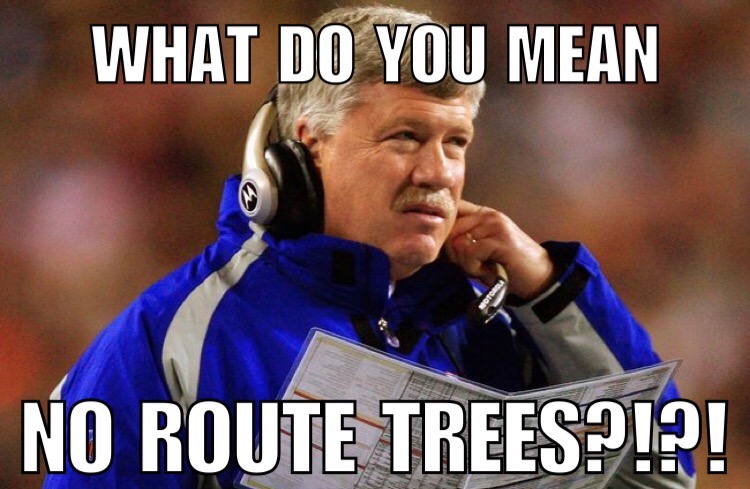