Q: Chance for four-straight wins. How do you feel this team is coming together?

A: We’re getting better day by day. It’s something that we have to improve. Have to step up in each and every way, especially in offense and defense. Just be better. Right now, we’re in a good spot. Just have to keep winning. We have a tough matchup this week.

A: It’s everywhere. They’ve got guys on offense. They’ve got a great defense. Don’t know exactly what their record is but I do know that this is a playoff team pretty much each and every year. It’ll be a great test for us, a great matchup. I’m looking forward to it, it’s Monday Night Football.

A: A.J. is one of the best, hands down. He was gifted with speed, size, hands, pretty much everything that you would think of in a receiver, he’s got it and then some. He’s one of my favorite in the league. I’ve watched him for a long time. Even when he was at Georgia, I was at LSU. We watched those SEC guys pretty closely. Defense has a tough challenge ahead, for sure.

Q: When you have a guy like that on the other side, does that get you a little more jacked up for a game?

A: Absolutely. I’m out there watching. I’m watching what he’s doing because I enjoy it. I love football like that. I love seeing other guys who are great. As long as I’m not going against you. It’s not like I’m rooting for him, but I like to see someone at their best. If not, I like to see them compete.

Q: What’s the skill that pops out at you?

A: He’s got it all. Like I said, I couldn’t pick one for you. He’s tall and he goes up to get every ball. He’s got great hands and he runs great routes. He’s got speed. I don’t know what bad I could really say about him.

Q: Could you compare yourself to him in any way?

A: Maybe the way he goes up and gets a ball. The way he attacks it in the air. There is little bits and pieces of each person’s game that I’ll try and take and incorporate it into my own. I’m sure there is a little bit of that in there. We’re just not the same build. Not the same receiver.

Q: Can Jackrabbit give A.J. Green a run for his money if he happens to cover him?

A: I was having this conversation with someone else. You talk about who’s the best corner in the league this, that and the other. It’s tough to even put him in that category. You see him every day and go against him, when you’re asked who’s the best corner, you don’t think someone on your team. He’s playing at the highest of highest levels. He’s not really giving up much. He’s been a phenomenal player since I’ve known him. I would expect him to be on him at some point in time. Also, 41 (DRC). He’s a 6-foot-2 guy who’s up there a little bit but still runs a 4.2. He’s smart. I would expect a little bit of both. I would expect 41 on him, and 20 on him. More importantly, I’m expecting some really good work. Have to watch that whenever you get a chance.

Q: Do primetime games mean more to you?

Q: Where do you think this team is in terms of coming together and fighting for a championship?

A: I think we’re right there at 5-3. Of course, you could sit here and could’ve, would’ve, should’ve won games that we could’ve won. We could’ve done this different. That’s not the case. We’re 5-3. We are a 5-3 team right now. Just trying to progress each and every week. Want to make this run towards the back end of the season. We have a great opportunity ahead of us. A position I haven’t been in since I’ve been here. It’s great to feel this way. It’s great to be 5-3 at the moment. You can’t sit here and be complacent with it. You have to keep going and pick up wins.

Q: What can you learn from Leon Hall about the Bengals defense? Have you talked to him at all?

A: Yeah. I was talking to him today. We were just talking and trying to get the inside scoop. Just what he would know. I’ll definitely find out more from him this week. A guy like that, who’s been there and played over there for a while, I’m definitely going to get into his playbook and asking him what he knows and what he doesn’t know.

Q: The music playlist at practice seemed to have you going today?

A: You have to have energy at practice. You have to have fun. You can’t go through this methodically and come out each and every day and think it’s just another day and you want to get through it because you’ll never get better. If you’re not getting better, you’re getting worse. I don’t really believe in getting worse. I try and come out with as much energy as I can every day. Come to work. You fight through all of this for Sunday’s. You sit here and you go through practices and meetings, everything for those 60 minutes on the field. The problem that I have is that I want to make the most of those 60 minutes every opportunity that I get. That’s really where I’m at. If you’re not able to make the most of it, then it’s difficult.

Q: When a guy like Pacman Jones calls you a freak in terms of ability, what does that mean to you?

A: I’ve watched him play football since he’s been in the league. It’s a compliment from a guy like that. I was at the Pro Bowl with him. We got to converse. He gave me knowledge of how the game goes. How to do the right thing. Just make sure you’re doing the right thing. He helped me as far as giving me examples of his past and kind of teaching me. It’s definitely a compliment coming from him.

Q: What do you think of the way Roger Lewis has stepped up these past few weeks?

A: It doesn’t come as a surprise. He works hard each and every day he’s out there. He’s given it his all. It doesn’t really surprise me. It’s actually more exciting to see him and all the work pay off.

Q: He says he watches you and Victor at practice. You’re not even that much older than him, but do you feel that? All the guys looking up to you at this point?

A: Sometimes. I don’t quite know. I get out there and just space out. As much as I’m involved with every single person on this team, there’s times where I’m just in my own world. If somebody is watching or following, I don’t quite know that. I do know that each and every time I run a route, it’s got to be the best route I’ve run so far. Never really any plays off for me. In turn, I’ve seen Rog. He’s not really taking any plays off. He’s excited about his opportunity and working as hard as he can.

Q: All your teammates talk about how hard you practice. Do you think people don’t know that?

A: I don’t know if they do or don’t. It’s irrelevant. Everyone is going to have their own opinion at the end of the day. I know that each and every play I get out there, it’s going to be full speed. I’m going to try and break the previous speed that I ran on the last route. I’m just trying to maximize my opportunity. It’s just such a small window. You only have a little bit of time. I’m just trying to make the most of it.

Q: A guy like Randy Moss when he is in the building, what do you try and pick from his head?

A: Everything. He started something that even now, he has his own little segment, You got Mossed. The Getting Mossed thing inspired a lot of receivers. You wanted to go up top on someone and you wanted to scoop the ball off his head and run it into the end zone. I’ve watched him streak down the field for years. Change his route. Just put his hand up and it’s like, we’re gone and out of here. He’s a guy who I aspire to be like. Just him being able to be here, pick his brain and take whatever I can take from him is good. 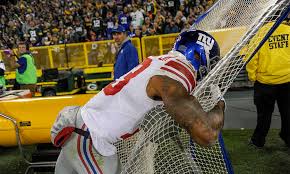