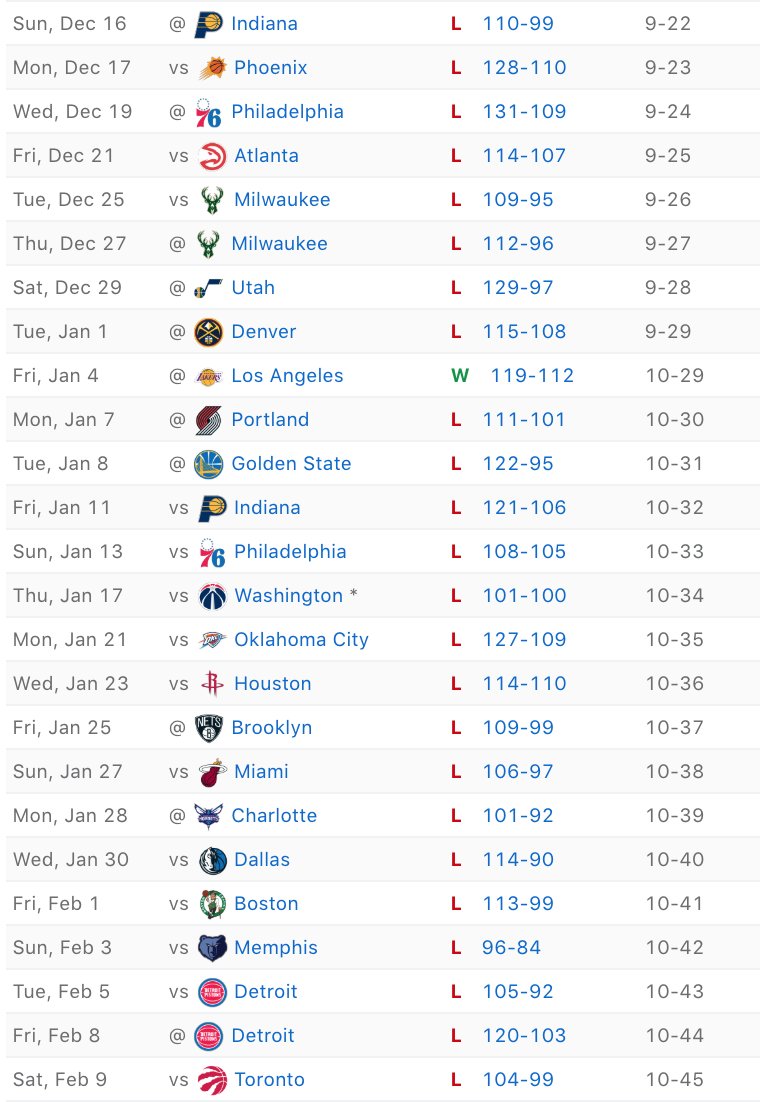 The only thing that sucks a little bit is the new draft lottery rules making it more difficult to lock up the 1st pick.

I posted this in the other thread-

I know a lot of this hinges on the situation the Knicks are in, but would you be in favor of trading Zion for Anthony Davis?

- I’m also loving the Celtics struggle. Very telling comments from Morris. That team is a mess. Where’s the criticism of Brad Stevens?
Typical Knick bad timing
PhilSimms15 : 2/10/2019 10:16 am : link
Could the change in lottery rules be next year. Knicks chances at the first pick (if they come in last) last year was 25% and now it’s 14%. Last year the further they’d fall is to #4 and now its #5.


No. We’d have to empty the cupboards. We’d give up Frank, DSJ, Knox and 4 first rounders? That’s like emptying the cupboards for Melo all over again.


I would gladly empty the cupboard for KD, Kyrie, and AD. Who cares at that point? Good players would flock here for the veteran minimum just for a chance to play in NY and win championships.
Could They Fall to 5th?
Samiam : 2/10/2019 10:31 am : link
They have the worst record slightly worse than Cleveland and Phoenix, a few wins less than Chicago. I could see them winning meaningless games to catch those 3 teams. But They’ll never catch Atlanta. Is there a process where they could draft belie Atlanta?
Odds
TyreeHelmet : 2/10/2019 10:32 am : link
Didn’t realize how badly the new lottery odds hurt the worst team now. Last years rules gave the worst team a
-25% chance at number 1
-65 % chance at top 3
- could not fall past number 4

That is a significant disadvantage! It’s really time for some Knicks luck. They can’t have PHX or Cleveland win another lottery.
Rip Fizdale for x's and O's
nygiants16 : 2/10/2019 10:33 am : link
and no offe sive system right now but he has done a fantastic job keeping this team together and playing hard..


with changing the odds they also changed the lottery to 4 teams not 3...


The Hindenburg was a disaster. If the Knicks end up picking 4th or 5th the world won’t stop spinning. The Knicks can still win in 2019 if they don’t get lotto luck.

I’d prepare for pick 4 if I we’re some of you. You’ll be better off.
I am fine picks 1 to 3
nygiants16 : 2/10/2019 11:09 am : link
Great thing for the knicks end all be all is not just draft lottery..
The new lottery rules are a joke. There are 4 teams that are blatantly
Mike in NJ : 2/10/2019 11:24 am : link
Tanking this year. So obviously the changes haven’t done much to deter teams from bottoming out, so what exactly is being accomplished? For a team in a small market like Cleveland, all this does is ensure that they are going to be bad, and have to tank for a longer period of time. They aren’t going to attract any free agents, so their only path back to relevancy is to get lucky in the draft and now that’s less likely to happen.

These changes were a knee jerk reaction to what the Sixers did for 3 years, which ended up working out pretty damn well for them. There are going to be bad teams every year, whether they do it purposely or not. The product on the court hasn’t suffered. The west is as competitive as ever, and the top 3 in the East is as strong as anyone out West, and this is despite there being teams that are still clearly trying to lose.
What the hell happened on January 4th.
GiantsUA : 2/10/2019 11:24 am : link
We went to the Christmas Day game, bit of blowout, hoping it was close.

3. New York Knicks - Jarrett Culver, SG, Texas Tech
Culver was considered a fringe first-round prospect in the preseason, but has shot up draft boards during a breakout sophomore campaign by improving his scoring efficiency while significantly raising his usage rate. A 6’6 guard who may still be growing, Culver is thriving as an offensive initiator this season, proving he can stockpile buckets (18.8 points per game) and still get his teammates involved by more than doubling his assist rate. He also plays an integral role defensively for the country’s No. 1 defense.

Culver might lack the ideal athletic pop for a top-three draft pick, but he makes up for it with versatility and smarts. This is a big guard who can play on or off the ball. He’s a reliable catch-and-shoot threat from three-point range (37 percent) and also a master at moving around screens without the ball to put himself in position to score. He may not have the star upside of a player like Barrett, but he almost feels like a safer bet to contribute to winning within a team construct.
Link - ( New Window )
For those watching more closely than me
theold5j : 2/10/2019 12:06 pm : link
Where do you project Zion in the NBA. From a distance to me I feel like hes a little under sized for PF and prob cant play SF.
RE: For those watching more closely than me
DanMetroMan : 2/10/2019 12:08 pm : link
In comment 14292287 theold5j said:

The linked scouting report is fairly impressive. His downside is his outside shot at this point. The unknown is whether that can be fixed.

I want to like this guy, but the 3PT% is just dreadful. Definitely talented though. I wish there was a lights-out shooter at the top of this draft we could select.
My dark horse pick would be Darius Garland.
bceagle05 : 2/10/2019 12:37 pm : link
I could see him wowing teams in workouts.
Personally, and yes I think it would be a reach
Really : 2/10/2019 12:39 pm : link
I think De'andre Hunter will be a stud in the league
any player the knicks add next year
nygiants16 : 2/10/2019 12:41 pm : link
especially if they add durant, they need to be good 3 point shooters especially if you keep smith and deandre...

Knicks will need 2 shooters next to those 3 guys
No way to passing up Morant
Pan-handler : 2/10/2019 12:41 pm : link
I think the clear top 2 are Williamson and Morant then there is a drop. All the other guys have much bigger question marks to become elite players. You see both those guys just at another speed than everyone else on the court. I remember going to a Seton Hall vs Gtown game when I was in college (wasnt a big college BBall guy at the time , more NBA) but there was this kid who looked like he was in fast forward while everyone else was in slo motion. I was like who is that guy?! Of course it was Iverson. Now Im not saying Morant is iverson. But the point is both these guys play at rare speed and explosiveness for their positions.
RE: RE: For those watching more closely than me
Pan-handler : 2/10/2019 12:47 pm : link
In comment 14292288 DanMetroMan said:


Totally believe it because many teams dont have dominant Cs like back in the day of Ewing, Olujuwan, Robinson, Shaquille, Duncan, Smits etc.

With his immense frame a very strong 285 and his hops he would do OK at that spot provided he wasnt playing a really good C who could post him up with superior height and simultaneously deal with his strength.

On the Knicks if they somehow got him and Durant while keeping Knox, he would very likely get some minutes at the 5 depending on match ups.
Super
Jon in NYC : 2/10/2019 12:56 pm : link
uninterested in Hachimura. Just looks like a good college player that will really struggle in the pros.
I think Bol and Doumbouya
Strahan91 : 2/10/2019 12:57 pm : link
are going to go higher than the mocks have them right now by the time the draft rolls around. Both guys are raw and there are concerns but I’m intrigued by their upside vs most of the guys not named Williamson, Barrett or Morant.
Jesus christ
theold5j : 2/10/2019 1:35 pm : link
I just saw Zion block from last night
Alan Hahn called the Zion block...
manh george : 2/10/2019 2:57 pm : link
the most athletic play he has ever seen in basketball. 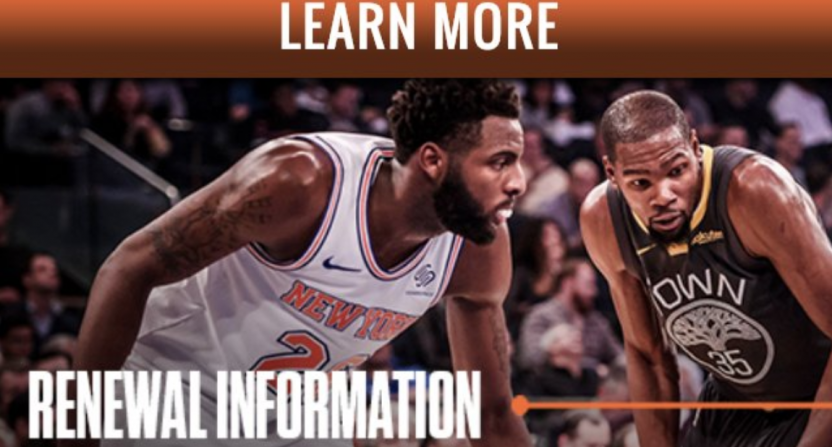 
No way that's a coincidence lol.
I was talking NBA with some friends the other day
PetesHereNow : 2/10/2019 3:54 pm : link
and they're from Oakland and Boston respectively. And, they're talking like their teams might make the Finals and the Knicks are in full tank mode.

For 20 years, it's been varying shades of down hill with their dumb trades, bad picks, and idiot moves.


In fairness I think he said the fans deserve it. The front office sure as hell doesn't but I do like the job Perry has done.
RE: I was talking NBA with some friends the other day
chopperhatch : 2/10/2019 6:31 pm : link
In comment 14292435 PetesHereNow said:

Agreed. After dealing with Layden, Isiah, Phil, Dolan, etc we deserve to win the lottery and come away with Zion, Durant, and Irving this offseason plus a few good veterans who sign cheap deals because they want to come here and win.
RE: RE: PetesHereNow
PetesHereNow : 2/10/2019 8:10 pm : link
In comment 14292503 robbieballs2003 said:


I meant the fans. We/I deserve to be relevant in these random NBA conversations.