Veteran offensive linemen form a cohesive unit much faster than rookies. Adding Zeitler and Remmers will have a big impact on Barkley and that's not counting the improvement that we will see from Hernandez next season. Also Halapio should be an upgrade over Pulley and Greco.
...
christian : 5/13/2019 5:32 pm : link
I expect Barkely to have a very productive season. I hope the WRs show they can get separation and force teams to not stack the box.

If they cannot, this offensive will much like last year -- huge numbers from Barkley -- but a pedestrian run game.

What can't happen is volume passing to Barkley at a low YPC.

You can put lipstick on that pig and call it an extension of the run game, but what it really means is fewer big plays and yards.
Wow
mittenedman : 5/13/2019 5:34 pm : link
he looks a lot like Geoff Schwartz in that video. I've never really seen him play.
Usually I find myself being the optimist, and I am mildly optimistic
Ira : 5/13/2019 5:38 pm : link
about this signing. He's definitely an upgrade over Wheeler. But I wouldn't expect anything more than average from him, and that's only if he stays healthy. Back injuries have a way of becoming chronic.
I like how he has his head of when he blocks
Peter from NH (formerly CT) : 5/13/2019 5:46 pm : link
looking for the stunts. Something that was a complete disaster last year.
He and the RG
lono801 : 5/13/2019 5:47 pm : link
Did a very good job picking up stunts. The same page without doubt.


He's a career journeyman. He's a short term pickup, not really a solution. It's a guy that's never really stuck in one place. 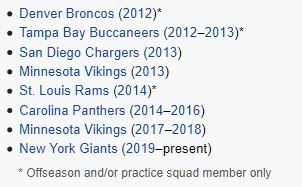 
Chalk it up to such dreadful play that has caused selective amnesia. After picking up Jamon Brown off waivers last year, he was playing in his first game against San Fran. After a San Fran turnover in the red zone, Eli threw a TD that was only possible because Jamon picked up a stunt. BBI and the collective wisdom of the game thread was ready to cast Brown's bust in Canton. Jamon Brown's Stunt Show
Looks like we all
Dave on the UWS : 5/13/2019 8:38 pm : link
noticed the good technique in handling stunts. It also jumped out at me when he got his hands on his man it was over. There are going to be some pretty good holes on the right side with him and Zeitler. The competition will be good for Wheeler, especially if Remmer’s back acts up.
RE: RE: Can’t say I’ve seen him play
Klaatu : 5/13/2019 8:44 pm : link
In comment 14442353 Ten Ton Hammer said:

The fact is, once he was given a shot, he stuck. Two-and-a-half years with Carolina, starting every game, regular season and post-season, and then he left in free agency for Minnesota.

In his first year there he started eleven games at RT before getting hurt. His second year they moved him to RG and he started all 16 regular season games. Yes, he struggled at RG and the Vikings released him, and then he finally had the surgery to repair the injury to his lower back he'd suffered the previous year.
Diver
lono801 : 5/13/2019 8:47 pm : link
Good stuff...uncharted territory the last few years

I’m sure Eli was shocked as well.


And they also had 2016 UDFA Rashod Hill, whom they're pretty high on.


We have been conditioned by such crappy play at RG that BBI was shocked by that play. I was part of the elation in the game thread. Who knows what happens if Brown didn't pick it up, but Eli would have taken a brutal hit. Now, Brown wasn't everything we had hoped as the season wore on. But he was the best RG we have had in years. There were plenty of threads in December speculating on what sort of contract we could sign him for. Thank goodness for Zeitler. He will provide stability on the right side which will help Halapio and Remmers.
I’m actually looking forward to it
lono801 : 5/13/2019 9:16 pm : link
Is the Line perfect? Nope

But this is good stuff...

For once in years The Giants have a starting point. Not a Chinese Fire Dril

As for Wheeler? He looked the part from day one. Guess it’s up to him now.
I like the signing
rasbutant : 5/13/2019 9:18 pm : link
One thing i noticed watching his highlight video. I could predict if it was going to be a run or pass play just by watching his back leg. Never really focused on that before. Not sure if all lineman do that.
Come in healthy and do your job big guy.
BlueLou'sBack : 5/13/2019 9:50 pm : link
Listen to Saquon when he tells you "just hook this guy" because SB will make you look good, big fella, real good.


Exactly, this will allow Barkley to run free and give Eli a chance to be a play action QB again, what he is best at. And from a future perspective, nothing helps out a young QB more than a solid offensive line.
One thing I like is
gidiefor : Mod : 5/13/2019 10:39 pm : link
that tape shows that he knows how to pick up stunts. Tn the past several years no one on the right side could pick up a damn stunt. It was maddening
I would love
Bleedin Blue : 5/13/2019 11:03 pm : link
To see Eli have as much time in the pocket like that!!
I won't call hima JAG, but he's not the solution.
Optimus-NY : 5/13/2019 11:31 pm : link
He's yet another step in the right direction. Best put, he's what Parcells called a "hold the fort" type of player until the cavalry arrives. The fort is being held by Remmers and Halapio at Center. These two positions still need to be completely solidified.

At least RT is not an embarrassment anymore. Worst case scenario for Remmers is that he's a JAG, which is still better than Wheeler. Solders stil has some good years in him, but in another 2 to 3 years, he needs to be replaced too. That will be because of age in all likelihood, so there's still a lot of work to do. My one fear is that Halapio is s clear liability. Him not being replaced by someone who is at least not a JAG is very worrisome to me.
RE: RE: RE: Can’t say I’ve seen him play
Ten Ton Hammer : 5/14/2019 12:19 am : link
In comment 14442455 Klaatu said:


The fact remains that he did stick, so to say, " It's a guy that's never really stuck in one place" is not accurate. It's just like saying, "Remmers has been with eight teams in eight years." Technically, that's true, but without any context, it's deceptive.

There's no reason to knock this move or demean the player. It seems to me that negativity has become a reflex action around here. I guess that's understandable considering how bad the team has been for the last eight years, but still, when a step is taken in the right direction - even a baby step - it would be nice to see it accepted, if not applauded.
Solid upgrade badly needed at RT
JonC : 5/14/2019 7:58 am : link
provided his back is healed up and ready to go. Buys DG a year to see if they can develop the UK rookie and/or hit the position against next offseason.
RE: RE: He and the RG
Gettledogman : 5/14/2019 9:02 am : link
In comment 14442299 Eric from BBI said:


True ... some also don’t seem to realize that an “average” RT will look like Kareem McKenzie compared to the Hart/Wheeler disasters we’ve been trottting out for years.

An average RT is still a significant upgrade to this OL. He is not a “savior”, but he is a big improvement. At the cost he signed for, it’s a brilliant acquisition ... and yet, some people will still cry about it.
Pages: 1 2 <<Prev | Show All |