Maccagnan Fired as GM of the Jets


Darnold is still TBD, he hasn't shown anything yet to make someone think he's really good. If he is just a journeyman type guy, then last years draft was a disaster for the Jets
The Giants have been a joke for years
Greg from LI : 5/15/2019 1:04 pm : link
And yet still aren't the most embarrassing organization in town. Thank you Woody Johnson....
Even when the Giants are a complete disaster
Rflairr : 5/15/2019 1:07 pm : link
under Gettleman. The Jets have to take out due them. Jeesh
Can Denny in Denville Troll
BigBlueDownTheShore : 5/15/2019 1:10 pm : link
get banned already. He just says shit in threads to stir people up.
RE: Can Denny in Denville Troll
Jay on the Island : 5/15/2019 1:17 pm : link
In comment 14444924 BigBlueDownTheShore said:

Imagine how sad this guys life must be that he spends so much time trolling a message board and takes pleasure in doing so.
Ownership
Thinblueline : 5/15/2019 1:18 pm : link
Wanted Daniel Jones is why.
.
Ryan in Albany : 5/15/2019 1:19 pm : link
Maccagnan should have been fired after the Christian Hackenberg pick....not the year after.


I wouldn't put it past the Jets to hire a pro personnel director who is in jail.
bad situation obviously
bluepepper : 5/15/2019 1:21 pm : link
but if in fact the coach and GM were at loggerheads and the situation couldn't be mediated then they had to fire one or the other. Timing is bad but the Panthers fired Gettleman at a similar point in time a few years ago and went on to have a good season.
RE: Got this from my Jets fan friend a few weeks ago
Matt in SGS : 5/15/2019 1:24 pm : link
In comment 14444785 BIG FRED 1973 said:


Big Fred, thanks for sharing. I was listening to Dave Te's podcast before the draft and he was saying that the word was McCagnan was going to be fired right after the draft and that power struggle was a mess.

To not have your coach and GM on the same page, particularly a new coach with a spotty track record, as they put together the team during the offseason and then fire the GM right now has to be a joke move and one which basically signals that Gase is coaching a team that he didn't really want.

At the very least, we can see that Gettleman and Shurmur are on the same page.


Fairly sure that DG was fired b/c of the sexual predator Richardson, not b/c of the head coach.
Rob, the point
bluepepper : 5/15/2019 1:34 pm : link
was Carolina fired their GM and went on their merry way and had a good season. People overreact to these things like this especially a guy like Bonigno who seems love being miserable over the Jets. They fired their GM. They will get a new one. Maybe they will be better for it.
Where's FanoftheJets
SFGFNCGiantsFan : 5/15/2019 1:36 pm : link
? I thought he'd posted already.
RE: Where's FanoftheJets
Jay on the Island : 5/15/2019 1:38 pm : link
In comment 14444964 SFGFNCGiantsFan said:

He will be in hiding for the forseeable future. That is until Darnold throws a td in the preseason then he will grace us with his presence and predict an MVP season for Darnold.
RE: Rob, the point
RobCarpenter : 5/15/2019 1:39 pm : link
In comment 14444962 bluepepper said:


It's a completely different situation. The GM had built the team with players that the head coach wanted. And the head coach had been there for six years - and went to the Super Bowl in one of those years.
RE: Wow.....was part of it about Gase not wanting to sign Leveon Bell?
Gettledogman : 5/15/2019 1:57 pm : link
In comment 14444857 GiantBlue said:

Again, stop derailing threads with your cyberstalking hallucinations, you are learly suffering from the onset of dimensia.

I really have to look up Donny posts, that guy sounds awesome :p
Gase..
FatMan in Charlotte : 5/15/2019 3:41 pm : link
will probably have to pick his GM because what I've heard is that he's extremely difficult to get along with. Burned bridges in Miami and was trying to hardline Maccagnan from Day 1.

From what I've heard, it wasn't so much a power struggle as it was Gase making a lot of demands. Supposedly, before the draft, Mac and Gase got together to strategize and Gase walked out early and reportedly said "You'll pick the guys I tell you to" and alluded to Mac being gone soon.


Reese wouldn't take this job. Ross would!
yeah, I don't get this either.
Del Shofner : 5/15/2019 7:21 pm : link
I don't follow the Jets all that closely but for any sports team it's a no-no to do this unless the coach is some kind of legend and has earned it.
...
HitSquad : 5/15/2019 7:45 pm : link
Joe B's off-air comments
Link - ( New Window )
I just want to say it again (as others have said)
djm : 5/15/2019 8:47 pm : link
there are probably millions of fans in the truth state area alone that are convinced that the jets are on an absolute lock paved in gold track while the giants are an absolute train wreck. Why? Because one team took a rb last April while the other one took a qb. And it just spiraled from there. I’m not even trying to prop the giants up, they still need a lot of shit to go right with these kids developing but the jets....... THE JETS!!! I can take some shit but the jets.... That i can’t take.

We complain about shurmur? There’s no doubt that shurmur can and will get the most out of a qb. He’s produced winning nfl offense on more than one occasion as OC with not exactly stellar talent. Gase?? Great he has a slightly under 500 record as HC. Wooopy he’s won more games as HC than shurmur. I’m sure he’d suck ass too if he coached cleveland like shurmur did. Gase was mediocre as OC prior to that. Now he’s orchestrating an nfl coup. Enjoy it jets fans.
RE: ...
BigBlueDownTheShore : 5/15/2019 8:47 pm : link
In comment 14445461 HitSquad said:


I agree with what Joe is saying, Gase hasn't won anything. I don't think Gase is wrong for thinking they over paid for players like Bell and Mosley. He's right there. 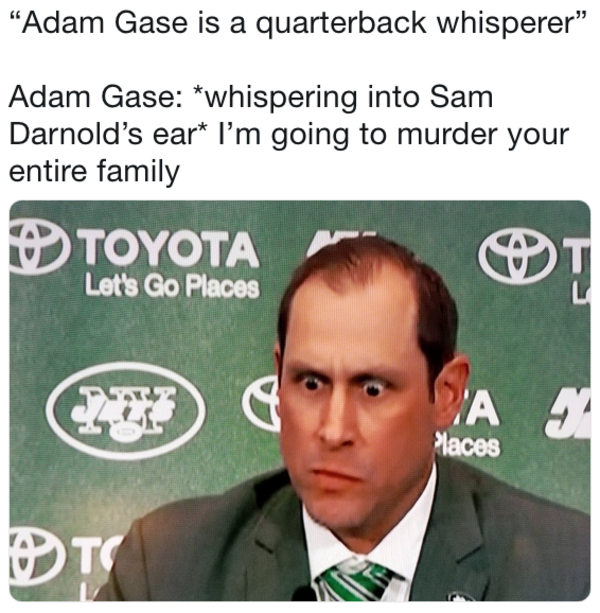 As usual a simple minded and gullible analysis from someone who easily falls for the bbi-espn narrative. Why would the jets fire someone who drafted their messiah Darnold and his qb whisperer lol
RE: RE: RE: ...
BigBlueDownTheShore : 5/16/2019 9:26 am : link
In comment 14445812 Coach Red Beaulieu said: