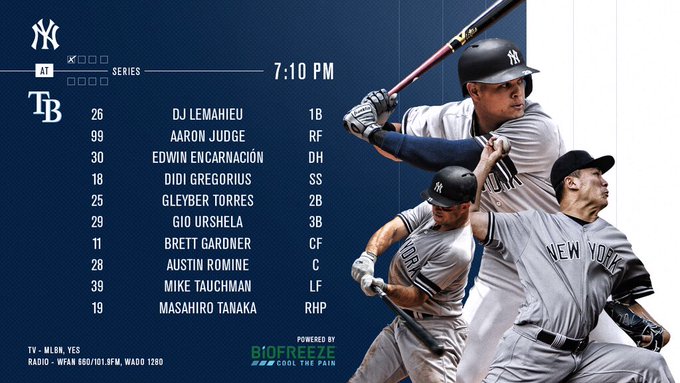 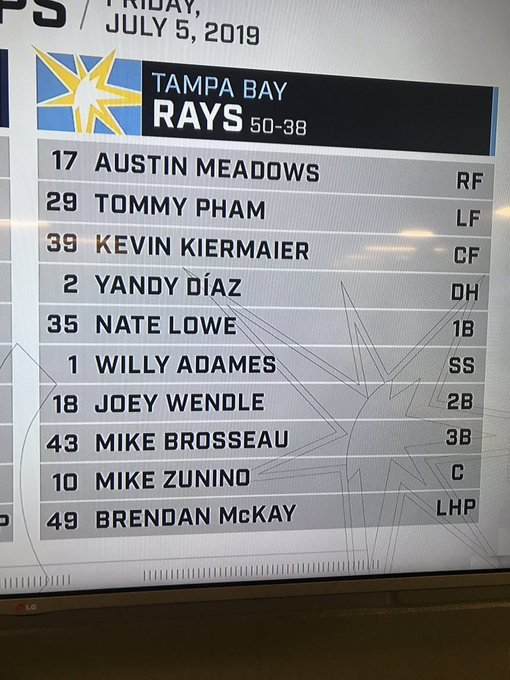 
Even if we sweep them they are still going to dip into the trade deadline because they are in a wild card race
This team is relentless
Eman11 : 7/5/2019 10:40 pm : link
They just keep coming at teams and pressuring them til they break em.
13 home runs for Gardner
Kyle in NY : 7/5/2019 10:40 pm : link
Already more than last season. Fascinating season for him, feels like he hasn’t been at his best but the power has really been there. For what’s supposed to be the 4th OF, well certainly take it.

I agree that they would do well to be in a race while looking for real estate deals from other cities but we want to make them think hard and perhaps no be in on trades we may want to make.

None of that plays out if we don't win the series. The closer they get the more they look at our injuries and tough schedule and say "why not us"?


One of the most fun teams to watch in my 60 years as a Yankee fan.


There is no getting “Chapman’d“

He’s one of the best closers in baseball. Perfect he is not. They aren’t all Mariano...


Well, I guess it isn't just football where you sound like a whining moron.
Don 't get me wrong I love this team and this season has been a blast
Stu11 : 7/5/2019 11:14 pm : link
but I feel this past week we've been cheating the reaper a bit putting the tying run on all the time. ehhh who cares wins are wins just being nit picky...
Another Amazing Game
Percy : 7/5/2019 11:15 pm : link
Missed some in the middle, but saw the three Yankee homers. Late innings for the Yankees remain a terrifying experience for their opponents. Judge resumes his heroic status. Gardner does it again (yes, yet again) in a key, game-determining HR performance late. Team somehow survives into extra innings -- Rays could have, but didn't win it earlier. BP works well enough, but still unsteady, requiring the closer dramatics of Chapman. Great, great baseball!
RE: Another Amazing Game
Percy : 7/5/2019 11:36 pm : link
In comment 14492857 Percy said:

Funny thing is Mariano wasn't perfect either. Chapman actually has a higher regular season save percentage than Rivera. 89.1 vs 90.2. Mariano just had this aura with Yankees fans that he never gave up leads.
RE: Getting chapman'd again
Greg from LI : 7/6/2019 1:34 am : link
In comment 14492828 micky said:


One reason is that he was almost unbeatable in the playoffs. Another is that his blown saves tended to be clustered together - he'd have a tough couple of weeks, usually early in the season, where he blew a handful of saves and then he would be lights out for the rest of the year.
Chapman's control was pretty darn good tonight.
BlueLou'sBack : 7/6/2019 1:46 am : link
He made several pitches that, from what we've seen most of this year, should have been called strikes. Certainly when the Yanks are batting those are called strikes. Now all of a sudden they are calling balls unless it actually is in the strike zone...

Cant wait for electronic strikes/balls detection. We are there, as far as the technology is concerned I suspect.

Yankees: 27th comeback win of season, tied with Dodgers for the most in MLB.

Last year had 37 comeback wins the entire season (12th in MLB)
Chapman sometimes comes out sloppy
section125 : 7/6/2019 6:18 am : link
and then gets sharper as the inning goes on. Normally when he comes out sharp, he stays sharp and has an easy inning. Big Lou, I disagree, those were a bit outside and he called it that way most of the night. He was not giving low strikes consistently. But it is a rare night Chapman throws 9 pitches to retire the side.
Let's also remember he came on with two on and one out and got out of it. While it wasn't perfect he did his job.

He'll be unavailable today.
Crazy how last year they struggled with the Rays, especially in Tampa
shockeyisthebest8056 : 7/6/2019 6:29 am : link
and now they're kicking their asses.

Big-time hits by Hicks, Judge, and Gardy. I wish Boone would give Sanchez and DJ actual days off. Don't want to run them into the ground so early.
RE: Crazy how last year they struggled with the Rays, especially in Tampa
section125 : 7/6/2019 6:42 am : link
In comment 14492967 shockeyisthebest8056 said:


Sanchez had the night off, but pinch hit and stayed in the game in the 9th. Romine took a couple of nasty foul tips off the knee and forearm.

...Brendan McKay is gonna be a real pain in the ass for years to come. He's got real good stuff and the demeanor to match it. Wish he was wearing pinstripes instead!
RE: RE: RE: RE: Getting chapman'd again
Matt M. : 7/6/2019 8:03 am : link
In comment 14492932 Greg from LI said:
It would actually be right about now. He generally came out of the break a little tired and had about 2 weeks of tough outings. They'd rest him a drop and then he was lights out the rest of the way.

As for the moron post, nobody claims he was perfect or infallible. But he was head and shoulders the best nearly every year and unquestionably the best when you look year over year. He was dominant every year, right up through his final season. He was consistently great. His contemporaries tended to flane out after 2-3 seasons. He never did.
agree Matt
Bill2 : 7/6/2019 8:07 am : link
he often had a drop in late July/August and then he would regain form in September through November.

I also agree that he could have had one more season perhaps two but at lesser effectiveness. He had lost mileage by then and he was easier to hit and he needed more rest between games. It was time.

He came back after his injury so he could end on his terms and he did
What is the lastest rumor/consensus in baseball around electronic
jgambrosio : 7/6/2019 8:24 am : link
Balls and strikes?

Im giddy around how it would help judge's numbers. Imagine all those knee high (or shall I say below) strikes he's gotten in his career.
Pages: 1 2 3 <<Prev | Show All |