that can now take over peoples bodies.


It wasn’t built overnight, what are you talking about?
.
Banks : 7/8/2019 8:28 am : link
for me most netflix shows start tanking towards the last 2 episodes of their first season, but Stranger Things is actually getting better as it goes imo. This was a good season, arguably its best imo.
Next season will be its last
Canton : 7/8/2019 8:34 am : link
.
I must have really liked it
Greg from LI : 7/8/2019 8:56 am : link
Because I enjoyed it despite the insanely absurd Soviet plot line, in which hundreds of Russians somehow infiltrate a small Indiana town, build a massive industrial complex hundreds of feet below the surface, run around town toting automatic weapons, and no one notices.

I mean, how did all those Soviets even get there?? Where did their building supplies come from? No one thought it odd that a mall loading dock was patrolled by men carrying rifles? And we're not even talking about infiltrators speaking perfect English a la The Americans - no, these are just Russian-speaking soldiers in Red Army uniforms.
Not many know...
Canton : 7/8/2019 9:39 am : link
Ethan Hawke also added
Canton : 7/8/2019 9:40 am : link
.
Canton : 7/8/2019 9:43 am : link 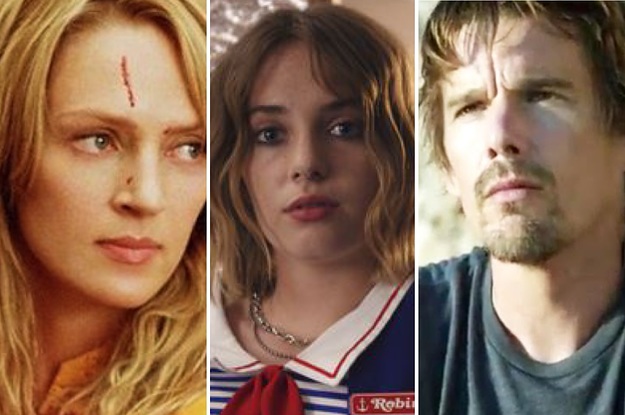 
Where did you see this? I don't think there has been anything officially announced. I've read or heard before that the Duffer Bros see it as a 4-5 season story.
A possibility of a fifth
Canton : 7/8/2019 12:19 pm : link
I guess I'm in the minority
Tony in Tampa : 7/8/2019 12:49 pm : link
I was really disappointed by how predicable S3 was. Was all ready to binge on 7/4 and ended up have to endure ep7 & 8 through Sat morn. Couldn't take the constant bickering. And having all the teenagers paired off so now we can go through their teen problems and relationship issues was interminable. I guess I felt that S3 really was not for someone my age even thought I didn't feel that way about S1 &2. Oh and let's just throw in the Russians with some Dolphin Lungren ruskie terminator guy for yet another fight seen.


How long would it take the Soviets to build it in secrecy from the entire community particularly as we know various government folk have been trying to mine the same vein and were about the neighbourhood? Loved the season with this being the one thing I couldn't get behind. This wasn't helped by how easily our heroes were able to come and go via the elevator that is left basically unguarded.
RE: I must have really liked it
RasputinPrime : 7/8/2019 3:17 pm : link
In comment 14494279 Greg from LI said:


...and yet they are undone by THOSE DARN KIDS!
well, look, it's a conceit of the series that the kids do things
Greg from LI : 7/8/2019 3:26 pm : link
that actual children would never be able to pull off. That's something I can suspend my disbelief on in order to enjoy the show.

I still have to laugh hysterically at the idea that the Soviets secretly built a major military installation 500 feet below ground as part of a mall in a small Indiana town.

And I still enjoyed the season! I definitely liked it better than season 2. It was just one thing that I found completely absurd.
I thought
KDubbs : 7/8/2019 4:01 pm : link
That the mall had just opened and being as the mayor was in on selling property to these people, they just built the thing underneath while the mall was being built?

And werent there already tunnel systems coming out from Hawkins lab?
Yes, the mall is new
Greg from LI : 7/8/2019 4:14 pm : link
But still - how are you getting dozens and dozens of non-English speaking Russians into Indiana without anyone taking note? Were the workmen who built the mall Soviets too? If not, wouldn't they have noticed a 500 deep elevator shaft being installed in the loading dock?
To pile on...
Gmaniac1 : 7/8/2019 6:19 pm : link
... let's not forget, this was during the Cold War.


It’s funny because I thought the first episode was fantastic. Not quite sure what one wouldn’t like about it if you enjoyed the previous seasons. They nailed it.
thought this season was great - especially the first half
Eric on Li : 7/11/2019 6:28 pm : link
it was still an excellent season overall, but I thought the first 1-4 eps especially it was really hard to stop watching.
LOVED just about every moment, including the music
Jints in Carolina : 7/12/2019 7:43 am : link
though there were some things that I didn't care for...Erica was for the most part funny, but I could have gone without her cracking sarcastic shit every five seconds.
A fun little thing for me were the allusions to '80s movies
Greg from LI : 7/12/2019 9:24 am : link
Maybe they're in my head but certain things seemed to me to be homages of sorts. The Russian dude that looked and acted like the Terminator. The secret elevator into the bowels of the earth like Spies Like Us. The Cars' "Moving in Stero" playing when the MILFs are ogling Billy at the pool, like the Phoebe Cates scene in Fast Times. And I might be crazy, but when the exploded rat starts sliming around as a puddle of goo, to me it looked just like Lane Mayer's mom's cooking escaping from his plater - "It's got raisins. You like raisins"
RE: A fun little thing for me were the allusions to '80s movies
Jints in Carolina : 7/12/2019 10:23 am : link
In comment 14497183 Greg from LI said:


Is it an allegory comparing Russian meddling in US politics today? Maybe the ridiculousness of it is the point.
RE: I haven't read anything in this thread
Jints in Carolina : 7/14/2019 3:11 pm : link
In comment 14498014 Bill in UT said:

I also like that they released it on July 4 and chose to do a season with a summer feel instead of the Halloween/nighttime mood they went with in the first two seasons.

I thought the Steve-Robin dynamic was great. Once you know she is the daughter of Ethan Hawke and Uma Thurman, the resemblance becomes so obvious.

Was the Russian thing corny? Yea. But that’s 80s corniness for you.

I thought the last episode was awesome. The contrast of the “Dustin’s GF” scene with the “Hoppers Letter” scene in the same ep was amazing.

This would be a good ending. But I’m down for season 4.
I just finished it too
UConn4523 : 7/21/2019 7:16 am : link
forgot to post about it. Thought the season was great. The finale was one of the best I’ve seen in a long long time. I’m still stuck on the use of “Neverending Story” - it was simply awesome and I keep hearing it in my head.


Why? You don't have to watch season 4. Why must it cease to exist because you dont like it?
I'm only 3 episodes in
santacruzom : 7/21/2019 9:09 pm : link
But thus far I haven't been thrilled with it. There are certainly intriguing elements as there always are and I'm definitely not going to stop watching, but the humor in particular is just not working on me. At all.
RE: RE: I haven't read anything in this thread
Bill in UT : 7/21/2019 10:33 pm : link
In comment 14503392 LakeGeorgeGiant said:

but I was looking for a binge watch and started watching and got hooked.

The show combines elements of The Goonies with Super 8 and a 80's John Hughes movie vibe.