USWNT world champions and well deserved!
Great game all around
Cenotaph : 7/7/2019 12:54 pm : link
I'd agree with Lavelle as Woman of the Match, especially with the knock she came in with....great game all around for US
Great job ladies!!!
dep026 : 7/7/2019 12:55 pm : link
Outstanding effort all tourney!
Very impressed by
Cenotaph : 7/7/2019 12:56 pm : link
Many of the US players: Lavelle obviously had a great tournament, Mewis was very good also in midfield, Ertz versatile enough to score on set plays and also drop into CB, Dunn looked great in key games at LB, and of course the attaching trio of Rapinoe/Heath/Morgan (with players like Lloyd, Press, Horan mostly playing as depth that would start for most other teams). Thought Heath may have been the best of the front 3 despite the goals going to Pinoe/Morgan more. Excellent team all around and future still bright for many players - though also impressed was several other teams making up ground on US (Eng, Ned, Fra, Swe, even Spa fought them tough).
RE: Great game all around
section125 : 7/7/2019 12:57 pm : link
In comment 14493740 Cenotaph said:


With Dunn a 2nd choice. She was great holding the ball and was a rock down left side. She advanced the ball beautifully to making a few nice runs.
They could have and should have had 2 more goals.
USA baby!
Ryan in Albany : 7/7/2019 12:57 pm : link 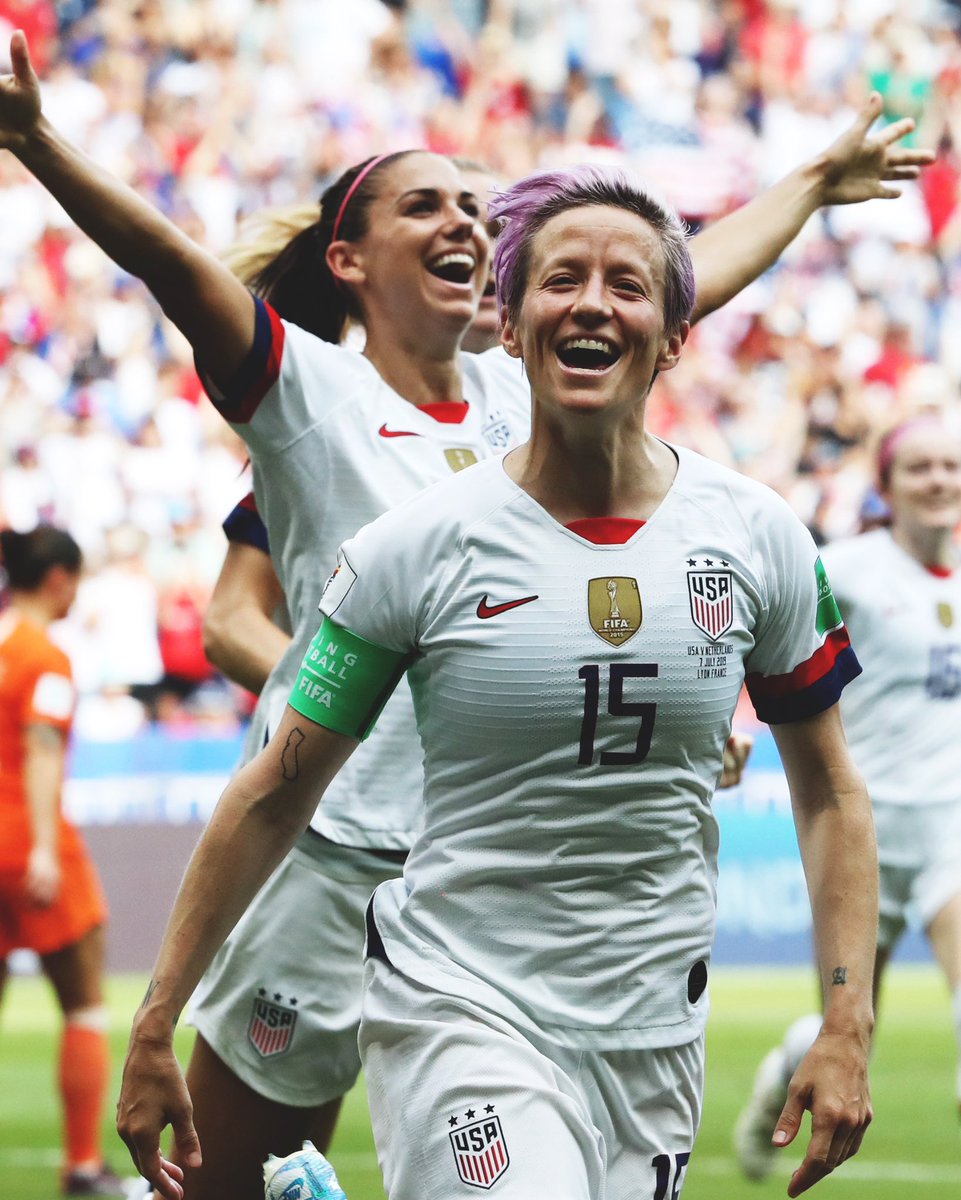 
Dunn played like a captain. Except for that game against France where she was outmatched she did a leader's job when nobody else was ready to play left back
Lavelle and Dunn
Cenotaph : 7/7/2019 1:06 pm : link
definitely the revelations of the WWC....Dunn was excellent all around at FB, especially defensively in the Fra game etc. Showed some great attack also...2 players that I don't think many were focused on before the tournament really played great on the biggest stage...

Gotta give it to the US women....the field (especially European teams) are gaining ground fast and the US went through almost every other major contender on the way to the final (except maybe Germany) on the way to the final win. Even if you think they were the big favorites coming in, it's still tough to go out and win each match when every other team has a target on you...a near perfect tournament all around, the US star power and depth all over helped seal a great championship!
That Rapinoe Pose
Rflairr : 7/7/2019 1:07 pm : link
Is fantastic
RE: That Rapinoe Pose
FranchiseQB : 7/7/2019 1:13 pm : link
In comment 14493749 Rflairr said:


yes it is!
So Rapinoe
Cenotaph : 7/7/2019 1:14 pm : link
takes home the Golden boot & ball, Morgan silver boot and Lavelle (well desreved) bronze ball...there's always that preference in sports for the 'stats' like goals, but Lavelle was every bit as good as any player I saw in this WWC.

...2-0 could have been 6-0.
Lavelle and Dunn
ColHowPepper : 7/7/2019 2:27 pm : link
Agree the revelations, but Dunn was not excellent vs France, she was beat several times, several giveaways, she did better in the 2nd. It was as much as to protect Dunn from worrying about her inside/right exposure as protecting a one goal lead that Ellis went to a 5-4-1.

THAT SAID, she grew before our eyes the remainder of the tournament, gaining experience, confidence, and assurance over the ball. Her athleticism is over the top: early on it was not translating to soccer excellence, as the grind wore on, it did.

Lavelle like a firefly in the midfield, so light on her touches, so quick to change direction without sacrificing pace. Got muddled a few times near the PA in prior games, not today.

And nary a mention here of Sauerbrun, who, after absorbing two nasty hits the second a deep gash, came back and was solid as could be when the Dutch were still in the game and threatening.

So many missed ops in the PA with numbers up in 2H...aaarrrggghhh

Love this team. Congrats to this team, for whom 'Pinoe is their controversial, emotional rock.

Now the part I hate after a WC or other major tournament: withdrawal, with no games to look forward to (with a nod to GC opioid substitutes).
Missed the first half of game but several observations
Rick in Dallas : 7/7/2019 3:57 pm : link
USWNT won tournament going through the toughest bracket. Beat Sweden, pesky Spain who were very physical, France and England before beating the Dutch.
Women’s soccer around the world is on the rise( especially in Europe where club teams are making a major investment in the women’s game).
As I mentioned in earlier threads, LaVelle had a wonderful tournament. She has world class speed and scored a beautiful goal.
Dunn improved dramatically during the tournament playing in the back four. She was excellent today.
In four years look out for Spain to be a major contender for the WC.
Just love Tobin Heath’s game. She leaves everything on the field.

Congrats to the USWNT on their fourth and best WC victory.
I actually thought the Netherlands
dep026 : 7/7/2019 4:02 pm : link
Was their easiest matchup out of their previous ones of Spain, France, and England.
Dunn had an amazing tournament
Peter from NH (formerly CT) : 7/7/2019 4:30 pm : link
Even against France when she was overmatched in terms of height and speed - she battled her @ss off to hold a dominant player down. Really impressive and hard-nosed. My type of athlete.
RE: Dunn had an amazing tournament
dep026 : 7/7/2019 4:39 pm : link
In comment 14493877 Peter from NH (formerly CT) said:

Although I would say for a superstar in her sport; Morgan is a total team player, generous to the other players and nails tough
one more for the...pinkie (:
ColHowPepper : 7/7/2019 5:17 pm : link
by the way, Lucy Bronze tweeted congrats to USWNT, looking forward to next encounter. Classy. 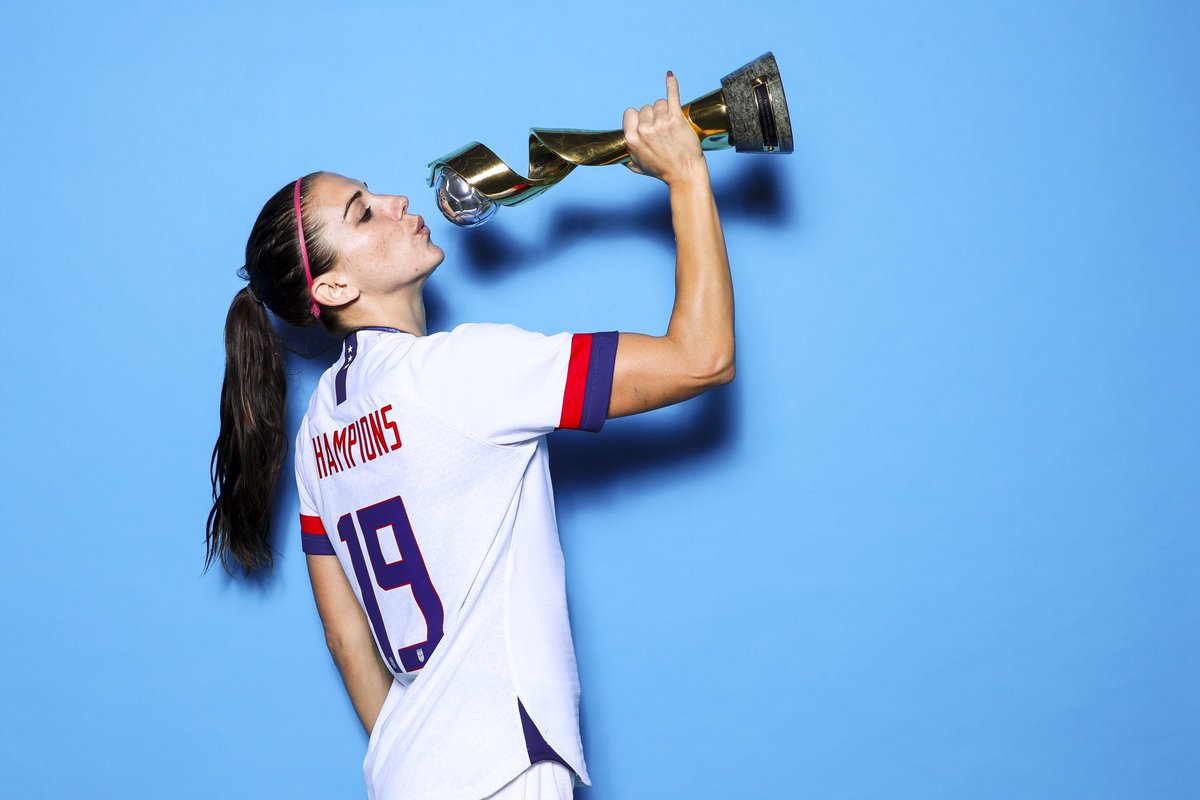 And those back 4 + 1, solid gold (Becky a bit banged up!! right eyebrow) Still giggling over this cycle and this victory. 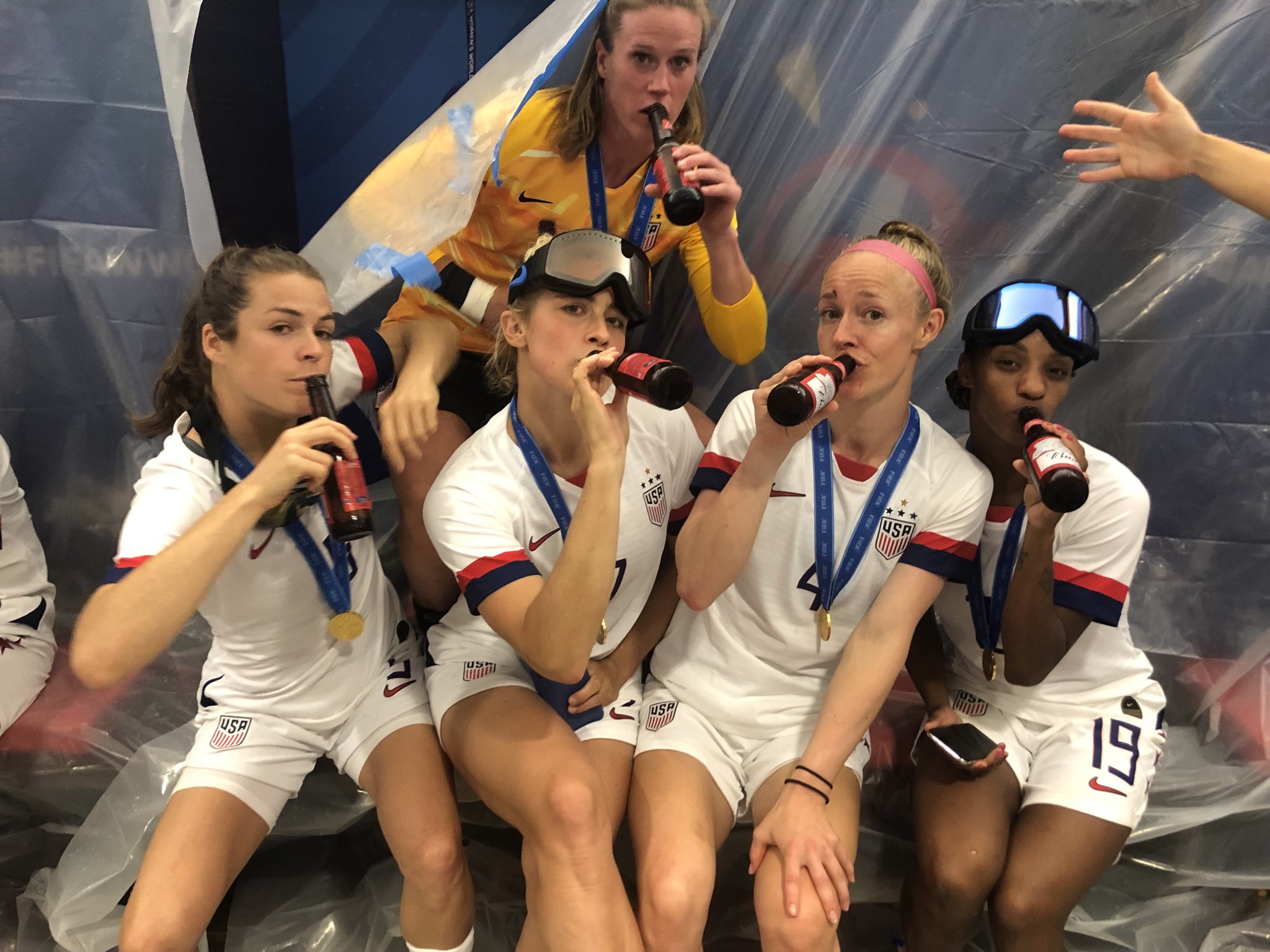 
I think they all are cause the one thing I noticed in the first game where they scored a ton of goals is when someone scored, the teammates seemed more excited than the goal scorer. Sometimes that doesn’t always happen.
van der Gragt mouthed the f-bomb when the yellow was shown...hmmm
ColHowPepper : 7/7/2019 6:05 pm : link


My daughter who played briefly in HS could not believe v.d. Gragt tried to play that with her foot. Her only chance was with her head. I'm surprised it wasn't a red card.
section125
ColHowPepper : 7/8/2019 8:56 am : link
(agreed w/your comments on thread, btw). The rules changed ~ three years ago: you are right, normally that is a straight red card and sending off. But FIFA/IFAB considered that when a foul inside the penalty area punishable by 1/ red card (sending off with no substitute permitted/team plays short) AND 2/a penalty kick was too harsh.

So, in such case a foul ordinarily punishable by red that occurs in the PA a yellow is given when a penalty is awarded. Fouls punishable by a red card (violent play, intentional or reckless play that is dangerous/endangers the safety of the opponent) outside the PA remains the same. So had van der Gragt hit Morgan studs up as she did anywhere else on the pitch but the PA, she would have been sent off.
a few thoughts on this team
PaulBlakeTSU : 7/8/2019 9:47 am : link
I like the description of Lavelle as a firefly and it makes for a great pairing with Mewis who is a bulldozer. Lavelle is going to be a problem for the rest of the world.

Great game for Sauerbrunn. I've been a fan of hers since we overlapped at Virginia and in past tournaments she was a dominant wall. She had a shaky tournament this go-around, but she fights and always leaves it on the field.

O'Hara has been a huge part of the team for quite some time and while it sucked to see her go out with a concussion, it was great to see Krieger (an old favorite) come on and lock down for 45 minutes

Tobin Heath is my favorite offensive player on the team. Her dribbling and possession skills are just on another level from her peers and she is always looks to create for her teammates.

I didn't think Rapinoe had a great tournament, or perhaps I like 2011 Rapinoe better she she was more focused on playing out wide and sending in beautiful crosses. But her ability to step up to the PK line and drill it time after time is not something that should go unrecognized and was the linchpin of many of the victories.

Hats off to Crystal Dunn for grinding out of position against an improving field of attacking women.

Overall, this team has an embarrassment of riches. That great talents like Brian, Press, and Pugh barely see the field speaks to how loaded this team is.
Pages: 1 2 3 <<Prev | Show All |