NFT: Marcus Morris to the Knicks?

Chauncey Billups shares why he thinks Melo isn't in the NBA anymore.
More from Berman
DanMetroMan : 7/11/2019 8:31 am : link
Barrett and second-round pick Ignas Brazdeikis (16 points, four rebounds, three assists) have a lot to think about after the summer league.
Do they represent their countries in the World Cup in August? Or do they choose to rest, relax and work out with Knicks coaches?

In Brazdeikis’ case, the Michigan second-round pick has been contemplating suiting up for his native Lithuania, according to an industry source. Like Barrett, Brazdeikis grew up in Canada.

Barrett was asked where he stands on playing for his country. As much as he has New York blood, he is Canadian first and was part of the country’s 18- and 17-and-under national teams.

“I haven’t thought about it much,’’ Barrett said. “I’m trying to get through the summer league first [before making a decision].’’

Knicks’ Ignas Brazdeikis always has silenced the doubters
Team Canada, according to the source, hopes he plays. That Rowan Barrett, RJ’s father, had been a key player for Team Canada in years past could weigh in the favor of him playing in the event held in China beginning in late August. Rowan Barrett was teammates with Steve Nash on Team Canada.

Davis
TyreeHelmet : 7/11/2019 8:35 am : link
I don’t believe that line from Berman for one second. But looking back, do you think free agency is different for the Knicks if they had Davis on the roster?

They would have had Davis and probably just enough room for 2 max spots. Would that have made Kyrie and KD consider the Knicks? Would Leonard have been open to playing with Davis? He was searching for a 2nd star to play with - spoke to Durant and Butler before George.


if he was not represented by klutch i dont think he is as adamant about grtting to the lakers and i dknt think the lakers cam take that risk by trading for him...

I still expect smith barrett knox randle robinson
Adding Morris would at least allow me to ENTERTAIN
bceagle05 : 7/11/2019 12:12 pm : link
the possibility of making the playoffs, for whatever that's worth with a bunch of vets on one-year deals. I feel like they're just trying to win more games than the Nets this season until the young guys develop more.
RE: will be intresting how fiz does this
Del Shofner : 7/11/2019 12:12 pm : link
In comment 14496634 nygiants16 said:


I expect that too unless they sign Morris, in which case Knox is replaced by Morris as a starter (is my guess). It wouldn't hurt to mix up the young guys with the vets a little more anyway. The second team could be:

that leaves a third team including frank, trier, dotson, iggy, ellenson, bullock (I guess there's a question how much he can play)

I don't know that he'd be a starter with the Spurs either. They liked using DeRozan at the 3 last year and Aldridge at the 4 with Forbes and Poltl in there too.
That's true, but DeRozan and Alridge are established players.
bceagle05 : 7/11/2019 12:24 pm : link
If the Knicks are going down this road with vets, they might as well try to win games. I have no clue who to start at guard - Smith and Barrett have the highest upside, but you could make a case for guys like Payton, Dotson and Trier if it's a true meritocracy.
Knicks will win all the fights with
bceagle05 : 7/11/2019 12:32 pm : link
Morris, Randle, Portis and Taj - nice group of enforcers.
RE: Knicks will win all the fights with
Heisenberg : 7/11/2019 12:35 pm : link
In comment 14496683 bceagle05 said:


One would think the minute allocation would look something like this:


i dont think he realizes how big the split is between nets and knicks. I think he thinks he will get the same love whether with nets or knicks
Elfrid Payton can and has been a starter.
Ten Ton Hammer : 7/11/2019 1:19 pm : link
I dont think it's so clear cut that hes a backup. As a PG, offense-initiator, and game manager, hes arguably better than Smith. I expect payton to push hard for that job.
I'd be surprised if the starters are all of the young guys.
JustaDiscussion : 7/11/2019 2:00 pm : link
It would seem to fly in the face of the idea that the players have to earn their minutes, which I thought was what the organization was promoting this year. Probability would suggest that some of the vets would win starter spots.

I'm also curious whether Fiz will actually stick with a starting line-up this season. Last season it seemed to change every few weeks. I'm going to wait for pre-season to make any starting line up predictions or assume anyone will be relegated to the bench. Just like last year, it seems like the Knicks have 15 players all who have similar skill levels, or at least that potential, so playing time will be difficult to allocate.
.
Del Shofner : 7/11/2019 2:18 pm : link
In comment 14496745 JustaDiscussion said:


Of course you're right to do so. But it's fun to guess, so here's my current thinking assuming Morris is signed:


The 4 young guys need more minutes than that. And that’s going to be a cramped floor for that starting 5.

I don’t understand this Morris signing at all or this entire offseason but that’s a different story. Why not just keep the 15million or cap space and move on from Bullock too? There are no NBA teams with substantial cap space. When teams want to make a trade and need a 3rd team with space to facilitate - that could put the Knicks in a good position. But who needs more picks when you can sign your 5th power forward instead.
Robinson
DanMetroMan : 7/11/2019 2:23 pm : link
with 0 uptick in minutes? Yuck
RE: Robinson
Pep22 : 7/11/2019 2:34 pm : link
In comment 14496755 DanMetroMan said:


"Obviously, guys can play their way in and out of minutes."


If the 3 minutes is going to keep you up tonight, there you go:

So IMO DSJ is an unlikely starter, tho if his shot has improved, that might make him the scoring choice over EP. Even so EP starts as the better playmaker. Then the only other definite starter is Randle at 4

Mitch should get the most minutes at 5, but with 2 guys better on O it won't be that simple. As mentioned if he doesn't get fouls in control it takes care of itself minutes-wise

Then RJ you think starts at 2, but the others are better shooters. So does Dot get the nod early being the best 2-way of those? Or Trier if they need more scoring? If either has improved this offseason, both have a shot outside of #3 pick taking priority

The 3 becomes much clearer without Morris. But iirc he's the best defender and solid all around. Knox then Iggy & Dot certainly need some minutes. Tho I bet Dot in particular plays some 2

Which is my last point, especially w/ the breakdown of set positions, there's gonna be a lot more overlap & grey area for positions. It's conceivable RJ / Iggy / KK do what Vonleh was doing from the 4-5 & bring the ball up. With EP the lone passing PG, this might be a more common in game move, even aside from the mandate to break. As people have said, there's a lot on Fizzy this time, interesting to see how he does
Assist percentage is an NBA stat
shyster : 7/11/2019 4:12 pm : link
Signifies the percentage of teammates' field goals that you assist on while you are on the floor.

Payton did have a higher assist percentage than DSJ last year but not by a lot -- 32 percent to 28 percent.

I find this stat to be pretty illuminating. Knox was abysmal. Ranked 441 out of 510 players who saw any NBA playing time. My biggest concern about his game.


Link to stat
shyster : 7/11/2019 4:13 pm : link
x
nba advanced - ( New Window )
I wouldn't waste much
Enzo : 7/11/2019 4:17 pm : link
time trying to figure out this rotation. There's simply way too many guys. I'm only sorta confident that two guys will get big minutes - Randle and Mitch. And even Mitch you can't be sure about since you never know if/when he'll be in foul trouble (maybe he improves in this area).
I just want an actual rotation this year.
bceagle05 : 7/11/2019 4:24 pm : link
It's time to raise the bar on Fizdale a bit - no more playing 15 guys and "evaluating" rotations for the entire season. I got so tired of Dotson (and several others) playing 40 minutes one game and getting DNPs the next two. I think it's time to start resembling a professional basketball team.
Fiz
DanMetroMan : 7/11/2019 4:26 pm : link
sucked last year. Sure the talent did too but he didn't do a good job. He'd be on the hot seat for me after the season if the young players don't take a step forward.
Fair enough shyster. Good addition w/ that stat
ChaChing : 7/11/2019 4:28 pm : link
I'd rather DSJ becomes the long term PG because he seems to have a fairly high ceiling still, esp as a scorer. And it could be Payton comes off the bench for a little more stability on the floor

While the starting group can do more with DSJ in theory even if he is a lesser floor general atm (I'd think atm) - Randle can do a lot with the ball, Portis too. Then KK / RJ aren't PG dependent either...tho you'd think we need less scoring if that was the 4, while PG / handle isn't a requirement

Again it's gonna be who works best - best PnR pairs, best trio on the strong side, best motor & team D if not just best choice to defend specific players. Gonna need a shooter or 2 which they seem to have more now, be it strong or weakside. Likely a lot of changes & experimentation early
My
DanMetroMan : 7/11/2019 4:29 pm : link
fear is Fitz putting DSJ on the bench as a "scorer". He's either a PG or he's not an NBA player.
RE: supposedly kevun durant made the warriors give up a 1st
Gatorade Dunk : 7/11/2019 4:48 pm : link
In comment 14496686 nygiants16 said:

Obviously GSW wasn't kicking in a 1st because Russell is in any way more valuable than Durant (except for next season), but how does KD's (self-)perceived value increase by GSW including a 1st?
I think with more established vets
nygiants16 : 7/11/2019 4:53 pm : link
Fiz has to esablish a set rotation..


Trier was a perfect example of extremely odd messaging from Fitz... I like Trier but why was he given a different set of rules within the system?
With Durant having a player option for the 4th year
dep026 : 7/11/2019 6:12 pm : link
The timeline for the Nets to basically convince him to stay isat most 2 years. Next year is a wash. The year afterwill be his first competitive b-ball in 16 months and probably won’t be the favorites in the east.


Exactly. I never understood the argument that it was a risky signing. The reward far outweighs any risk. You are getting one of the one of the best players to ever play the game from ages 32-34 at a minimum. And they got a first round pick in return. 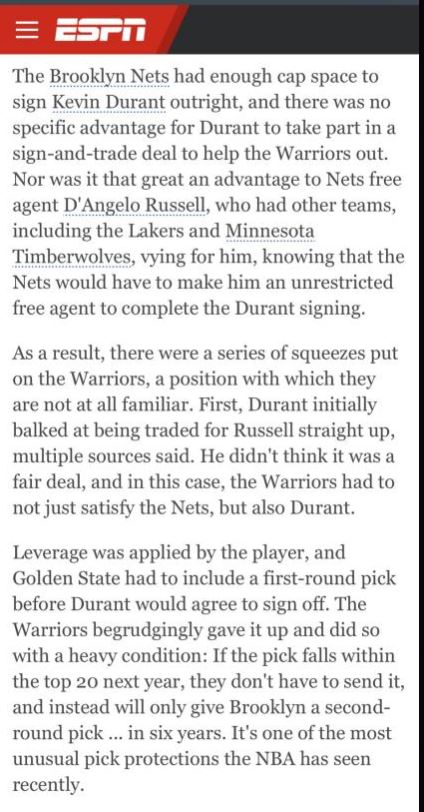