NFT: Adding a roof rack to car for a trip across country?

Milton : 7/9/2019 11:40 pm
I'm gonna be hauling some stuff across country in my 1990 Toyota Celica GT Hatchback, but I won't be able to fit a futon couch inside, so I'm wondering if I can buy a roof rack (for roughly $100 or less) to fit my car and safely travel with the futon couch on top. I've googled some possibilities but not sure how safe it is. My car doesn't come with anything on the roof to facilitate a rack so it would have to be something that operates via a window/door jam or similar.
Even if you get something that is made for it
steve in ky : 7/9/2019 11:57 pm : link
I would tie it down through the car as an extra measure of safety. Just use some strong but thin rope, open the doors and tie it across the entire top and through the doors, both front and back. Make a loop in the rope to pull, tighten and cinch it with.

I have tied a lot of things to cars over the years and if tied securely through the car itself I have never come close to losing anything. Impossible for anything to fly off if you secure to item on roof and then through the car with one long continuous piece of rope cinched properly unless you use cheap rope that could break.


A futon-sofa? Has to be more cost efficient to sell the futon sofa and then buy a lightly used one from a consignment furniture store to replace it when you arrive, vs the hassle of the roof rack, tie down on your roof, carrying extra weight up over the Rockies, the extra drag created by the wind resistance of an awkwardly shaped thing on your car's roof, etc.

You'll lose mileage with increased drag and you'll have enough to worry about nursing your venerable limo.

Cross country with a futon sofa.

I'll say this - I would lay money on the Toyota making it, but it is a really bad idea to strap it to the roof.

You need to do some math here. Because you're shelling out money to get that furniture across the country.

First off, if you can manage to install a hitch and rent a trailer from U-Haul, your tow capacity is 1322 lbs if the trailer has no brakes. Bad news here is you have to subtract the weight of your passengers and load from the 1322 lbs.

Hitches aren't free, and if you aren't handy, labor probably costs as much as the hitch. Plus there's the rental fee.

I had aftermarket roof racks installed on my Odyssey - that cost around $300 if memory serves.

I think you're probably better off selling or donating the furniture, and buying new/used equivalent when you get to your destination. This option will also make your trip less hair-raising for you and every poor bastard who encounters you in traffic! 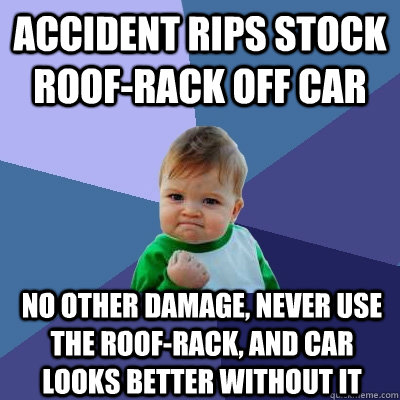 Me and my main squeeze (who has never lived more than ten miles from where she was born in Hollywood, California) may have just bought a house in the Berkshires. The inspection is tomorrow and there may be a hitch in the approval of the loan due to working in Cali and buying a home in Massachusetts, so it still could fall through.

I have family in Massachusetts (a brother and two sisters, one of which lives in Becket, near the house we bought). When we looked at the house, it checked all the boxes and the price was right, so we were ready to offer the list price but there was a dining room set that we really liked, so we decided to ask for the furniture, too, thinking we would negotiate down from there. But they said yes to all the furniture except for a few sentimental-value pieces that didn't interest us. So now we have a house full of furniture, most of it very, very nice, but the original plan was to rent a 10 or 15 ft U-Haul truck to haul our furniture.

At this point I should add that my girlfriend and I have never lived together, we have two apartments that we rent separately in Sherman Oaks. We're gonna keep one of the apartments and be bicoastal. For the past ten years, because both of us work from home, we have only needed the use of her car and my Toyota has remained non-operational to save money (also because there was a slow leak in the steering column).

So with the news that we inherited all this furniture, I'm not in the process of trying to sell as much of my furniture as I can. I have some really nice pieces that I'm not sure what to do with. The futon isn't one of the nice pieces, but it's functional in that we were planning on putting it in one of the three bedrooms so that the room can serve as a combination guest bedroom and TV room (where my girlfriend could put her stationary bike so that she can exercise while she keeps up with the Kardashians). As for the Toyota, I'm gonna give it to one of my nephews after making the trip. It's a FWD standard transmission and I'm gonna need AWD automatic transmission to deal with Berkshire winters.

You'd need to learn to drive with one wheel drive in the snow, but it isn't a necessity.
I use to own a Celica GT 2000 hatch
penkap75 : 7/10/2019 11:53 am : link
Was able to fit a disassembled full size futon frame, with futon mattress folded like a taco into my Celica, and close the hatch fully. I loved that car. My 1st car and owned her for 19 years and finally donated her to charity this year. Car still ran like new, but wife hated it because Fast n Furious went out of style 15 years ago, and a person in my profession (doctor), should not have that car sitting on their driveway in the North Shore of LI.
RE: Milton's a great contributer to bbi
BlueLou'sBack : 7/10/2019 5:23 pm : link
In comment 14495776 idiotsavant said:


Ditch the futon sofa, ditch the Celica, buy a Subaru Forester for the Berkshires (a Forester with similar mileage on the east coast will likely cost you less than you can get for your vintage Celica on the West coast, and you will have AWD which I'd highly recommend for East coast winters, nevermind what the guy above said - you been driving in SoCal for years, so don't hink your're gonna adapt to East coast winer driving in the fuckin; mountains lickety split) and for now take a train cross country and enoy the scenery.

I have driven 4 bangers across the country twice moving from CA to PA and back, hauling a modest U-Haul, and you really, really don't want to do that. You eat up that 4 banger giving you what 130 BHP? When the engine was new, I'll bet maybe even less?

I did that shit fresh out of grad school. Used cars cost less on the east coast than the do on the west coast. Sell the Celica and buy a friggen Subaru, you're old enough that the image of a cool old Celica shouldn't matter to you, find a 20 something surfer to buy your Celica...