Who would be the choice if the Giants had a choice between Jones and Murray?


Easily Murray. And I don't like his height or his turn signal size arms.

But he's got a plus-arm, plus-quickness, and is a tremendous athlete.
Interesting question
5BowlsSoon : 8/9/2019 4:41 pm : link
I wonder if Giants even had Jones rated over Murray. I don’t like Murray’s height but there is no denying he could certainly run for that first down on third and 5.
Jones had as sweet a series as . . . .
TC : 8/9/2019 4:41 pm : link
I've seen a QB have. But it was against a 2nd string D in a preseason game, and it was only one series. When he gets more action, and inevitably has an ugly series or two, he will be pronounced dog sh!t and a bust by the sports press.

BUT, in 60+ years of watching NFL QB's, I haven't seen a series in which a QB had any better timing, touch and placement than Jones exhibited in that one series. WOW!

And that can't be a bad thing.

He set the bar high
NewBlue : 8/9/2019 4:45 pm : link
Our expectations are now over the top, but you can't take away from the poise, accuracy and timing.
A toss up for me between Jones and Murray. They're so different and
Ira : 8/9/2019 4:46 pm : link
therefore hard to compare. The obvious differences are that Jones has the size advantage while Murray can whip the ball in and is a great athlete while Jones is just a good one. But Jones has shown that he can deal very well with duress.
Haha, paywall
Sneakers O'toole : 8/9/2019 4:58 pm : link
21st century football equivalent to snake oil
I think Gettleman takes
Dave on the UWS : 8/9/2019 4:59 pm : link
Jones, no matter what. Remember he said playing QB in NY is a load. It takes a special kind of person to handle it. Murray has physical gifts but he’s never shown he could handle NY.
Murray all day...
Johnny5 : 8/9/2019 5:15 pm : link
... every day. I don't give a shit that he's small. The dude is a playa.


This 2nd string thing is garbage.

a) He played without his 3 top playmakers.

b) The only place it really mattered was pass rush because the coverage was great, the separation was half the average separation. So he caught a break by having clean pockets but you know what? That's going to happen with an O-line in the NFL. It even happened last year with our shitty O-line. It's not like this huge outlier.

There were multiple starters on the field. Quinnen Williams, Brandon Copeland (OLB), Avery Williamson (ILB), Jordan Jenkins (OLB), Rondez Miles (FS).
I was shocked at how small Murray is
weeg in the bronx : 8/9/2019 6:43 pm : link
It's scary.
DG
joeinpa : 8/10/2019 8:03 am : link
Has stated his most important job is getting the next quarterback. One could also assume he liked Jones better than Darnold
I don't like munchkins in the pocket playing QB
Optimus-NY : 8/10/2019 8:08 am : link
I wouldn't take Murray on that alone, despite how good he is.
Bw In DC
mittenedman : 8/10/2019 8:30 am : link
you make the same mistake most amateurs do evaluating QBs. Looking for SportsCenter sizzle (insane traits) rather than a guy who is solid in all areas. (No weaknesses.)
A huge arm doesn’t matter nearly as much as an ability to drop back, read a defense & deliver the ball accurately on time to the right receiver. And insane athleticism (too much running around) is the death knell for an NFL QB.

I know we beat this to death during the draft but you were hideously wrong on Jones and now here you are pumping Murray over him because he throws hard and has great athleticism. Some people never learn.
Again, the Jets had a number of D starters in there when Jones played
PatersonPlank : 8/10/2019 9:34 am : link
not sure why people keep qualifying his effort. What about no EE, Shep, Barkley, etc. Shouldn't that matter too then? 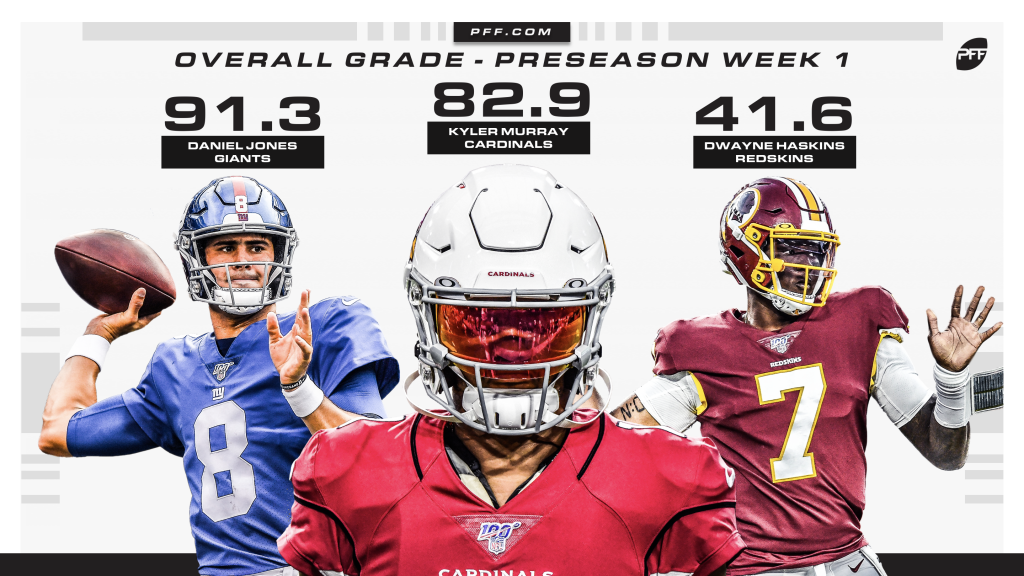 It’s amazing how everybody hates the Giants
This is what I don't understand
TrueBlue56 : 8/10/2019 9:55 am : link
I have read and heard that it was against 2nd stringers. It was one read and shurmur simplified it for Jones. If it was as simple as that, then why isn't it that easy for every quarterback. Drew lock struggled, haskins struggled and I can go on and on.

It is one preseason game and one drive, but what I like so far is that Jones is checking off the boxes. He looks calm and confident in the pocket, he made really good throws, he was accurate and he scored a touchdown.

Does it mean anyone can say for certain what he is going to be? No, but it's about developing and learning. It is such a lazy argument to say it was against the 2nd team and / or it was simplified for him, because if that was the case every rookie would have the same success.

We have seen enough from the likes of Nassib, Webb and Lauletta to know quarterbacks that struggle to what Daniel Jones showed.
We got mobile Peyton Manning all day
Coach Red Beaulieu : 8/10/2019 11:49 am : link
Murray looks like Gary Coleman out there.
Good post TrueBlue56
mittenedman : 8/10/2019 1:28 pm : link
I'd also add I caught some fire from him on the sidelines after the TD.

I love Eli but it's nice to have a QB with some emotion and ability to fire people up. He may have some Simms/Brady in him.