Anyway..Shurmur noted one of the mistakes Daniel Jones made was forgetting to get the tight end in motion prior to his first pass. I re-watched...and noticed Rhett Ellison was staring at Jones pre-snap waiting to motion. The reason they needed to motion him was pass protection. Ellison, being savvy and quick-minded, darted across the line after the snap and still made the block. Had he not, Jones would have likely be clocked for the sack. Maybe he would have still gotten it off, but that isn't the point.

When it comes to PFF grades, or the "grades" of media, you have to understand that IT IS A FACT...they often don't know the full scale of responsibilities all around.

If Jones got sacked there, we immediately blame the blocking. "OL gets beat"..."RB didn't pick up the blitz". If Jones had gotten hit, how many of you would have known it was actually Jones' fault?

Something woefully similar happened to both Haskins and Lock in their first preseason games. I think things like this happen more than we will ever know...and because of that the grades coming from them MUST be taken LIGHTLY.

Personally...I use them for about 25% of the information they throw out there. Some of it is very useful...but the grading just won't ever make complete sense.
Pages: 1 2 <<Prev | Show All |
You wrote that EVERYBODY hates the Giants
Jimmy Googs : 8/9/2019 7:47 pm : link
and you think I have a problem?
Sorry if a bit of hyperbole flew over your head.
PhiPsi125 : 8/9/2019 7:55 pm : link
It’s my experience that people will argue obvious hyperbole with vague, condescending comments when they don’t understand the actual point.

Yes, I’m sure there were some people talking highly of Jones today, it’s just not what I HEARD while LISTENING to the shows/media much of the day.

I hope your night gets better.
.
arcarsenal : 8/9/2019 8:01 pm : link
Phi... you need to understand that this guy literally spends entire days doing almost nothing but analyzing everyone else's posts around here.

Look at Eric's psychological impact thread if you need more proof. His thing today is to keep letting BBI know about their "self concept problem" - whatever that means.


Look no big deal. But clearly the commentary went both ways and probably moreso to Jones’ favor. Don’t need to play the underdog or sympathy card just to get a rise. The Giants will get better when they pick better players, play better on the field and their coaches/front office make better decisions.
RE: .
Jimmy Googs : 8/9/2019 8:14 pm : link
In comment 14525213 arcarsenal said:


Hmm...a bit active today. Don’t get so hurt because I mentioned you shouldn’t call out other teams players hoping to play bad. Clearly that and a few...set you off.


What I liked was that Jones mentioned it (what he did wrong) in his interview. How many QB's would have? He's learning and this is the kind of stuff that will earn him respect among his teammates.
It is really odd to me that people consider
Mike from Ohio : 8/9/2019 9:16 pm : link
things said by Chris Carter with any degree of seriousness. It’s like spending time pondering what the crazy guy on the street corner was getting at when he said Grover Cleveland was a Martian double-agent.


So let's connect the dots why I even brought it up.

In Sy's opening, he mentioned that Jones forgot to put the TE in motion. Yet, he still made the play. I obviously don't know the playbook, and found that an interesting wrinkle in the outcome.

So then I heard Carter and Mangini talking today about Jones's performance this morning. Carter is a HoF WR who is well versed in defensive secondary coverage. Whether you chose to accept that or not is completely up to you. And Mangini has been a DC for a SB winning team in New England under BP. So I think his credentials speak for themselves.

But then they started to analyze the TD pass and showed where the defense actually broke down. And how Jones and the Giants were fortune to pull that off. So like Sy's insight on his play, I found the insight by Carter and Mangini interesting as well. So I shared it.

Alas, I misjudged the sensitivity of the BBI mainstream. And forgot to anticipate that they would read the comment as an attack on Jones.


Good assessment, particularly of BBI. I have noticed similar tones as of late...
Is this bizzaro world of BBI
dep026 : 8/9/2019 11:01 pm : link
Haha. Wow.
The comment is..
FatMan in Charlotte : 8/9/2019 11:05 pm : link
and should be taken solely to something brought up quite a bit here - PFF is very misleading in player ratings. Their methodology is flawed. Their grades are often not even directionally correct.

This really shouldn't be such an issue, but the fact is that PFF touts its player ratings and shares them with several outlets. They put a spotlight on those ratings by highlighting them as much as possible.

Right now, they are the type of source that gives analytics a bad name, and that's with the full knowledge knowing that down the road they may have the resources to become an authority.

But right now they are an example of a self-promoting outlet that isn't providing any tangible insight, yet passing off information as it they are.


Did you read what you wrote in that first sentence? I think I understand the first part of the compound sentence but the second part makes no sense to me. Care to give it a second crack?


The media clearly had an agenda with the giants lately and especially this entire offseason. Yes they’ve been bad. Yes they are an easy target lately. This offseason has still been an embarrassment. Some of the shit being said has been deplorable.


Surprise, at least from Carter since he has a vested interest in Jones failing. But this isn't exactly linear. Giving props to Daniel Jones rather than nitpicking his play giving the circumstances makes way more sense to me. So it's not like giving him props is somehow as irrational as criticizing him.
RE: RE: It is really odd to me that people consider
Strahan91 : 8/10/2019 12:37 pm : link
In comment 14525483 bw in dc said:

Hmmm, Carter is definitely an expert who’s opinion should be weighed heavily. Who can forget the time that he rattled off his top 6 WR’s in 2011 and left Calvin Johnson off the list and then had this to say: “Calvin Johnson, he's very, very good at Madden and Tecmo Bowl or whatever they're playing now. But on film, when I watch film, and I break down the film, he's not to the point of these guys yet. That doesn't mean he can't play. He just not there yet." If you think Cris Carter is on TV and stays relevant because of his expertise, I have a bridge to sell you. He may not be as stupid as he seems but he certainly knows how to stay relevant given the state of today’s sports media.

Also no offense to Sy but this “interesting wrinkle” isn’t exactly groundbreaking news given that Jones himself said it the first time he spoke to the media after the game adding that he owed Gallman one.
I’d hang with Googs
gidiefor : Mod : 8/10/2019 1:45 pm : link
He tells it like he sees it and has a good wicked sense of humor.


Okay, for my future reference, can you please provide a list of which experts are considered too biased? Thanks.

Notice not once did I call Carter biased but since you brought it up, Carter called the Giants a racist organization who wouldn't have taken Jones if he was the same prospect except instead of being white he were an African American. That seems like a bias to me unless you think there's merit to that statement?

You keep referencing Mangini but I've seen the clip of him on FS1 and he doesn't make that point. Carter says a number of things, the last of which is about the touchdown pass and how as a coach wouldn't he be all over the safety for picking the ball and Mangini just says "yeah" and then goes into Shurmur commenting on him forgetting to motion the tight end and talks positively about Jones. Are you referencing him saying "yeah". If so, I don't believe that's him making the same point that Carter is... If I missed another segment, please do share the link.
RE: RE: Nice observation.
Klaatu : 8/10/2019 5:59 pm : link
In comment 14524959 Sy'56 said: 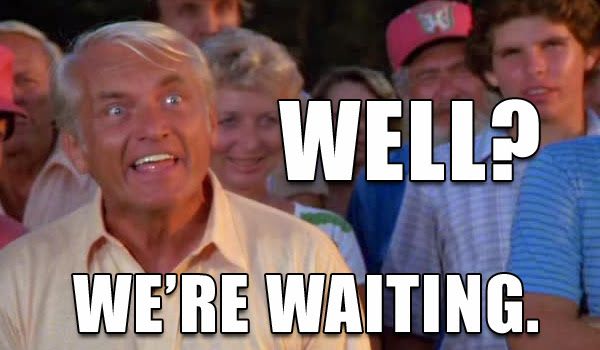 
I should apologize. Today was my moms birthday and she passed away in December quickly.