Such a solid group, and very likable and considering all things Mets it's sort of amazing they haven't messed it up somehow yet.
Full rankings
RobCarpenter : 8/12/2019 3:46 pm : link
Here: 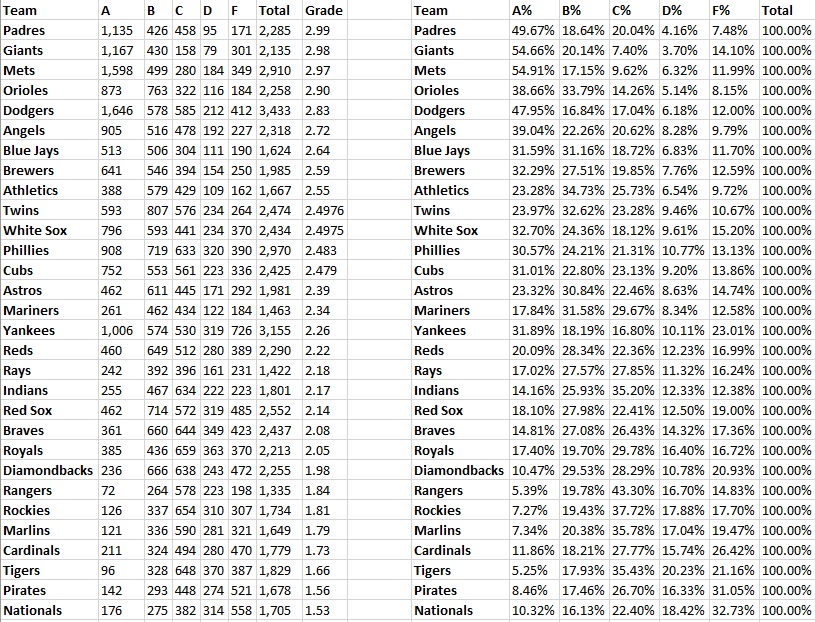 
The week where Ruocco and Russo filled in for Kay and Sterling was a godsend. I'm hoping that Ruocco gets more airtime even when Kay comes back.
RE: the Yankees' team depends on who is on
HomerJones45 : 8/12/2019 3:51 pm : link
In comment 14528001 Greg from LI said:
Each to his own. I think Cone is an annoying chatterbox who never shuts up. I keep waiting for O'Neill to say hello to Cora, yell Holy Cow! and thank someone for bringing the cannolis. He reminds me of Rizzuto- and that is not a bad thing.
I think Ruocco
bigbluehoya : 8/12/2019 3:51 pm : link
is way better than decent. He gets a superb grading from me. Knows the game, his love of it comes across. Nothing feels forced, not a lot of shtick.
.
arcarsenal : 8/12/2019 3:55 pm : link
Kay has kind of grown on me. I feel like he's gotten better as time has gone on.

Ruocco has done a very nice job filling in for him.

Cone is fantastic... he's a must listen any time he's in the booth. Excellent insight - particularly regarding pitching.

Paul is more comic relief than anything, but I like when he's in there.

The Mets' booth when both Keith and Ron are in it is great. Cohen's voice I always found to be fairly grating... but he does know his stuff and the insight provided by the other two makes for a really good group. Can't argue with where they're ranked.
RE: the Yankees' team depends on who is on
adamg : 8/12/2019 3:55 pm : link
In comment 14528001 Greg from LI said:


Flaherty is hit or miss. He used to be better. This year he's been awful.

And I also used to hate O'Neill as a broadcaster, but this year, he's gotten a lot better. He clearly knows the game well.

My favorite is when they have Singleton on pbp and Coney doing analysis. If they throw in O'Neill that'd be a fun time.
We get the Braves where I live.
SFGFNCGiantsFan : 8/12/2019 3:57 pm : link
Chip Caray is unlistenable.
O'Neill has grown into the role
Greg from LI : 8/12/2019 4:02 pm : link
He was pretty stiff in the first couple of years, but now he's relaxed and pretty damned funny. Gene's right, he's a lot like a Scooter 2.0.
Typo correction for those who might just glance at first post
shyster : 8/12/2019 4:03 pm : link
Yanks ranked 16 not 6
As a Reds fan I have to disagree with their low ranking.
RDJR : 8/12/2019 4:08 pm : link
Thom Brennaman, Jim Day, Chris Welch and Jeff Brantley do a good job. The Mets’ team is the best IMO. The Yankees’ team on the other hand is a tough listen. Roucco has helped tremendously in Kay’s absence, but O’Neill stinks IMO. Talks about himself too much, doesn’t offer much analysis and is just a wise guy. Cone is excellent.
Like he did as a player, Cone raises his game in big spots.
bceagle05 : 8/12/2019 4:12 pm : link
Yesterday's Chapman/Vlad showdown was a perfect example. He did an excellent job explaining - and second-guessing at times - the pitch selection during that AB.
I've always felt Singleton was a better play-by-play guy than analyst.
bceagle05 : 8/12/2019 4:14 pm : link
Not that he's a bad analyst, but he's got a great voice for play-by-play and sprinkles in some analysis as well. I enjoy the "players only" vibe when he's calling games with Coney and/or O'Neill.
RE: I'm a Nats fan
madgiantscow009 : 8/12/2019 4:17 pm : link
In comment 14528009 RobCarpenter said:


listened to them a little against the Mets, yeah, not great.
As a Yankee fan, have to admit
mfsd : 8/12/2019 4:33 pm : link
I’ll watch a couple Mets games a year simply bc I really like their broadcast team

Mets Nats game earlier this year and I was shocked how down right awful he was and it wasn't just being a homer which I could deal with - even from a rival team, his speech pattern, voice, word choice, all awful.

I literally want to jam jagged glass up my rectum instead of listening to another HR call by that booth
the Rays aren't ranked highly
Greg from LI : 8/12/2019 5:03 pm : link
But it's still too high. Brian Anderson is the worst.
I agree 100% with Greg
arniefez : 8/12/2019 5:26 pm : link
on the Yankees. As far as the Met go the less Gary Cohen the better but Mets broadcasts are generally excellent including Howie Rose on the radio. Hernandez and Darling are both fantastic individually and even better together. That mid/late 80's Mets team was a fascinating bunch.
RE: FP Santangelo
RobCarpenter : 8/12/2019 7:42 pm : link
In comment 14528149 pjcas18 said:


I haven't even heard every broadcast team in the league and still feel extremely confident in this being correct.


I don't see how F.P. still has a job. Just brutal to listen to that idiot. And he thinks he's so clever by saying "there goes the no-hitter" anytime the Nationals get a hit.


I know - and I'd never heard of him until he started calling the games. I suppose they hired him b/c he played for the Expos. But it's not as if he had a distinguished career. OPS of .716 for his career, woof.

Out of curiosity why do you say that about Cohen? I’ve always liked him but this year I’ve noticed he’s made lots of errors, to the tune of almost one every other game it seems. And he’s had a tendency this year to overreact on fly balls, some of which don’t even make the warning track. To me he’s definitely slipped this year.

Keith is easily my favorite. It’s a shame he only got the one year with the Fox postseason studio team. He was terrific in that setting.
I cannot stand Michael Kay. Listening to the games with Ruocco
shockeyisthebest8056 : 8/13/2019 4:44 pm : link
has been like a vacation. Flaherty is annoying, but he's on so rarely it's hard to get wrapped up in that. Cone and Singleton are great and Paulie is fine.

As a Mets fan, I'm not sure if that's right. Not that Gary never makes mistakes, but they talk daily about how the ball, even off the barrel or looking like bloop, goes out. Obv in context of juiced balls

And IMO since the break there's a few looking like they'd go out based on the 1st half but didn't. Iirc at least JD & Conforto had a few recently, even I thought those might go but died at the WT. It's become hard to tell

Outside of that, I'm no expert so maybe there's more but I haven't caught anything egregious or repeat for my part


Arbitrary and non-sensical hot take.
Arbitrary?
Greg from LI : 8/14/2019 10:40 am : link
I'm sorry, is there some kind of clinical measurement by which to rank announcers? Of COURSE it's fuckin' arbitrary, Fekker.

Not everything you disgree with is a "hot take". Some things are simply a difference of opinion.