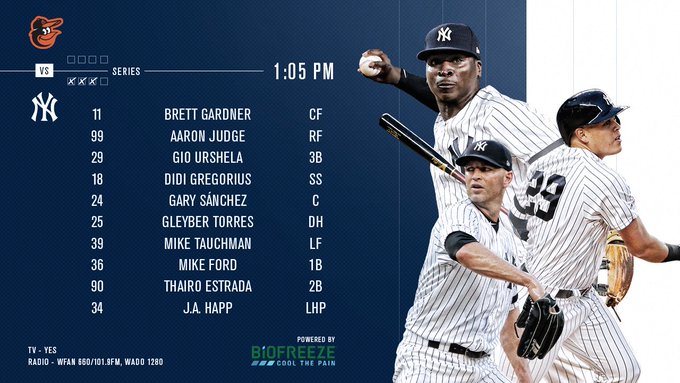 Love this one.
Booney
Carson53 : 8/14/2019 4:37 pm : link
with not his finest moment handling the BP, but they got a sweep. Cessa should have been out, before giving up a
2 run double to Nunez (one of his 5 hits), Ottavino comes
in to face the lefty, gives up a hit, now a one run game.
BTW> Ottavino struggles a lot more against lefties.
You get away with it against the odorous O's, but I'm
looking ahead to October, and they might not get away
with that BP maneuvering then, just saying.
Again, glad they got a sweep, but you can't ignore the
moves today.
Missed It
Percy : 8/14/2019 4:37 pm : link
As I feared I would. Happ was better, but Cessa has reverted to being Cessa, I see. Scored just enough to keep it away from the O's, which is enough, and got a great ending from Chapman. A game. Another win.
RE: Best thing for me is Gary
section125 : 8/14/2019 4:47 pm : link
In comment 14530406 Greg from LI said:

Sub-2 ERA, striking out nearly 13 per 9. One of the best middle relievers in baseball this year. But, he let a couple of inherited runners score, so...

It's amazing the way people just continually force themselves to search for things to complain about or nitpick.

The Yankees have the best record in baseball and are neck and neck with HOU/LA despite being without literally half their baseball team for about half of this season to date.


Amazing how many of those were on three ball counts too. Just giving the pitcher more chances. A bunch of them he was about to throw the bat to the dugout and he had to stop himself. Can't believe he hasn't gone apeshit yet.
Greg
Bill2 : 8/14/2019 9:36 pm : link
While the record of the 1998 team is absolutely amazing and this team although tremendous would be 11 games back of the 98 team...would the 98 team have been able to come within this teams record with this teams injuries ( especially to its pitching staff)?

I grant its another: Whose better Wille, Mickey or the Duke? kinds of questions, but "amazing team" is the right common description either way.


The injury situation makes this team's accomplishments incomparable.
Hi Bill!
Greg from LI : 8/15/2019 9:18 am : link
Very well indeed. Be a lot better when I finally finish my masters - night school is for the birds.

That's absolutely true. There's a sense of wonder with this team that wasn't there in '98. While no one expected 114 wins, people DID expect that team to be the best in baseball. They were primed for a huge year and they delivered even beyond those expectations.


Interesting from Sherman re Montgomery:

The Yankees do not need Labor Day wizardry from Severino. Their big AL East cushion allows a steady progression. Rosters will expand in September to better protect Severino, perhaps with Betances and even Jordan Montgomery, who Cashman noted actually is ahead of Severino as he returns from Tommy John surgery.

The goal is to stretch Severino to 90 pitches by October, prepare a talent who can navigate a strong lineup more than two times due to overwhelming stuff.
Pages: 1 2 3 <<Prev | Show All |