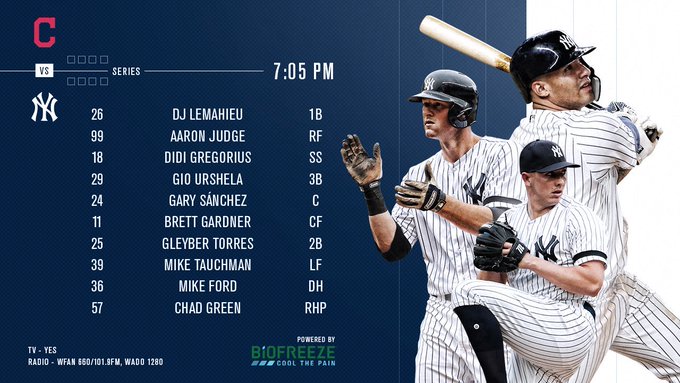 Jack Curry
@JackCurryYES
Luis Severino just finished a bullpen session. From my press box perch 400 feet away, it looked as if Severino threw with a lot of intensity. This wasn't some between starts tossing session. He was letting it go. We will see what Severino and Boone say about it in a bit.

Everyone is on Pluto today except Judgey.
Difference between a hit hitter and a cold hitter.
shockeyisthebest8056 : 8/15/2019 7:46 pm : link
Judge missed a nothing fastball. Gio saw it so quickly he was out in front of it and hammered it.

Turn out the lights?

Wasn't that also a line from a Donna Summers' song?

Turn out the lights sweet darling for tonight is all the way.

Love winning but we aren't winning post-season games with this team unless our stars get healthy. Judge with another brutal game.
RE: this is a flat out disgrace
adamg : 8/15/2019 10:31 pm : link
In comment 14531719 RasputinPrime said:


The first rule of Loser Crew, is to mutumbo your finger at fellow yankees fans.


we aren't winning post-season games with this team

It's a 162 game season. There's bound to be some bullshit games. Have a sense of humor about it.
This should have been expected...
prdave73 : 8/15/2019 10:47 pm : link
No surprise here. This team was going to come out this way especially since they lost 2 games straight to that shady ass Boston team. Also you can see that Boone knew it and put all they shitty pitchers this team had lol. Nevertheless I wasn’t expecting it to be this bad, so it’s a very concerning how bad some of this pitching staff is. Anyways hopefully the Yanks can take at least 2 games from this series, I’ll be fine with that.
missed this one, thankfully I guess.
Del Shofner : 8/15/2019 10:56 pm : link
Looking at the box score, Ford didn't do much (if at all) worse than the regular pitchers in this one.
RE: RE: RE: this is a flat out disgrace
Hsilwek92 : 8/16/2019 12:21 am : link
In comment 14531725 RasputinPrime said:


Shut the fuck up.

This team has been amazing this season. It’s completely reasonable to knock morons who know want to complain and cry like the sky is falling.

We got destroyed....shit happens.
Good morning.
section125 : 8/16/2019 9:01 am : link
Didn't see it. Could give two shits. Better to get crushed and shake it off, than blow a close one and the "what ifs" start. A good ass beating sometimes is a good reminder that there are other good teams in the league.

Good teams have bad nights. Great pitchers are off some times, so good ones can be excused on a bad night.

Amazing. One fucking loss is all it takes.

We were like 12-1 in opener games going into last night. Green didn't have it. He's not perfect.


Exactly. Not a hard strategy to grasp. Game out of hand early, send out a couple sacrificial lambs, save big bullpen arms for the rest of the series.

Still saw 12 Indians runs.
and I looked that 2009 game - I was off
Greg from LI : 8/16/2019 1:57 pm : link
It was 22-4. They actually had a 2-0 lead after the first....and then Cleveland scored [b]14[/] runs in the second inning. Similar scenario as yesterday: Wang got shelled and had allowed 8 runs in the inning while recording just one out, so to save the pen Girardi put someone named Anthony Claggett in the game, who allowed 8 runs himself in 1.2 innings.


Good to hear, Fekker. Enjoy watching the not-Mets in the playoffs!
I agree with the guy who said
5BowlsSoon : 8/16/2019 2:03 pm : link
Better to lose big than lose a gut wrenching game that should have been won. Move on....it’s just one loss. I’m sure Dodgers fans aren’t crying over their lopsided loss, 13-7, to the Marlins last night...so why should Yankee fans? 162 games...it is bound to happen.

Disclaimer: while not a Yankees fan (Mets), I’m rooting hard for Yanks to beat Astros in the playoffs, so I am following more closely now. I didn’t like hearing “everyone” say “you might as well hand the WS rings to the Astros” after picking up Greinke.
RE: and I looked that 2009 game - I was off
Ron from Ninerland : 8/16/2019 2:08 pm : link
In comment 14532213 Greg from LI said:
In a 162 game season games like yesterday's are inevitable. While the Yankees were having their clocks cleaned the Dodgers were getting torched by the Marlins. Chad Green didn't have it an Lasagna may have been called up too soon. The only thing thats important in these games is to save the bullpen. The only one I'm pissed at is Chance Adams who is becoming increasingly useless. The only thing a mop up relief pitcher has to do in that situation is eat up 3 or 4 innings. If he gives up 4,5 or 6 runs, who cares as long as he can stay in the game. But Adams couldn't even do that.
Pages: 1 2 <<Prev | Show All |