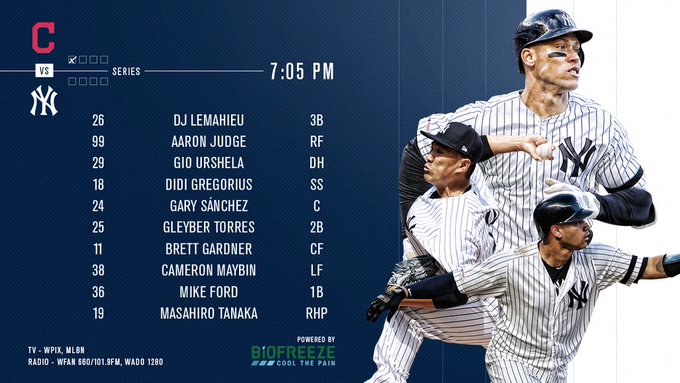 
that's brutal. In a year some some awesome rookies, he was the most impressive i watched.

But, to date (and it's a very small sample, so it's probably not indicative of too much) - I was much more impressed by Tatis. He's a much deeper player. He can steal bases, he fields really well, he hits for average and he has plenty of power. He's a more rounded player.


The issue with Vlad is his girth. With Prince Fielder still fresh in my mind, I hope Vlad Jr. get really serious about conditioning.


I love Cam. He's been such a shot in the arm for this team and he's loving every second of being here. Great guy to have on the team this year. His mother has been a very inspirational story, too.
Well that was a let down
adamg : 8/16/2019 7:37 pm : link
Bad AB and bad decision to tag up. Puig has a gun.
the Indians commentators when they realized Maybin was tagging
RasputinPrime : 8/16/2019 7:38 pm : link
"this is going to be fun".

Respect Booney for doing that.


Sure out was at first. No need to risk an errant throw into CF.


THE SKY IS FALLING!

The world is again spinning on its axis and the whiners will need to take the night off.


Maybe he has figured out how the throw the split with the lowered seams on this ball? He had flashes earlier in the year, but could not maintain through the game. Tanaka's out pitch is the split.
Great win by the Yanks
5BowlsSoon : 8/17/2019 10:12 am : link
Especially after the previous game loss. Tanaka pitching well, except against one guy, was encouraging too.
RE: Astros lost.
Greg from LI : 8/17/2019 10:33 am : link
In comment 14533634 Del Shofner said:


Unpossible! They're the greatest baseball team ever to lace up spikes!!