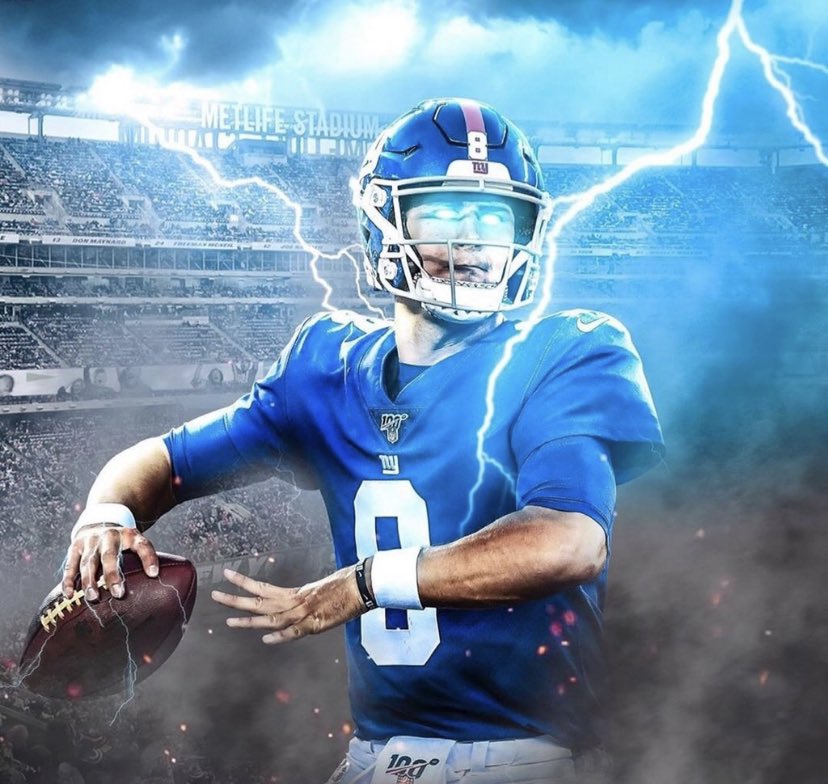 He's looking more and more like our future QB. He'll learn from the 2 fumbles but his accuracy, ball placement, and touch has been nothing short of spectacular.

You couldn’t have asked for a better start than he’s shown and he’s certainly supporting what’s been said about him in practice. Here’s hoping he develops into a legit franchise qb.
RE: We are seeing
BestFeature : 8/16/2019 11:24 pm : link
In comment 14533430 lax counsel said:


Same. He loses the ball. Then, our defense gets a stop. And then we score on our next drive.

Also, when it was 2nd & 19 and Jones and the offense managed to get us back into FG position and kick the FG, which is much better than coming away with no points in that situation. So far, so good.
I’ve been a fan
5BowlsSoon : 8/16/2019 11:54 pm : link
From the moment his name was called and he became a Giant. I don’t listen to ESPN talking heads because they just like to sound impressive with all their shouting and antics. Of course they think my mocking people, like Gettleman and Jones, that that makes them more impressive. Hardly.....just a lot of hot air. I’m glad when I’m at the gym running and espn is on the tube there is no sound.


He has some serious touch on his passes that I haven't seen a Giants QB have in awhile. Last week's TD vs. the Jets and this weeks TD were pretty much perfectly placed and close to the sideline, which makes it even alittle more difficult. It's cool to see a 22 year old compete these passes with pinpoint accuracy. Love that he completes the short passes as well, which isn't always a given for a QB no matter how talented that QB may be.

Alot of people have touted Jones' ability to run when necessary and throw on the run with accuracy. We haven't had to see him run from the pocket for a short (or long) run yet, nor we have we seen him throw on the run yet, but I'm excited to see both since both aspects are things that even some of his past critics have said he is very good at. Him not having to run yet is a good thing, though. Means the OL is doing it's job. Still excited to see both of those aspects at some point in the future, though.
It’s early
Payasdaddy : 8/17/2019 12:10 am : link
And have no idea what his upside is. But he has made a few very nice throws and most of the easy ones. He definitely looks like he at least belongs.
Some rookies are like deer in headlights
Don’t see it with him so far
And he is also playing without his top skills position guys( Saquon, Engram, shep.)
Kinda have a feeling within the next yr or two will draft him a number #1 wr too
And hopefully continuously solidly oline so he doesn’t have same issue Eli has last 5 yrs re. Oline
RE: worst nickname
kelsto811 : 8/17/2019 12:14 am : link
In comment 14533354 bluepepper said:


Its better than Pick 6
there is much compulsive obsessive ideation on bbi, but nicknames may
plato : 8/17/2019 12:15 am : link
be the most repetitive and meaningless. dimes = double nickels? come on, why not just sing “ Danny Boy”? He had a relatively good game, made some excellent throws, some wobblers too i think. read the field ok, but we don’t have coaches view or know what else was going on. Most are calming down from media craziness on draft day. ok, let’s just move on calmly.

let’s enjoy the process and hope for the best. Especially hope the owner leaves things for the gm, coach and w/l record to determine outcome. be calm and obsess on ideation beyond childish nicknames.
RE: RE: I’ve been a fan
5BowlsSoon : 8/17/2019 12:16 am : link
In comment 14533464 Dave in Hoboken said:


Great insight brother. And I agree....short passs are not to be taken for granted. There usually are a lot of bodies around the ball and you still have to lead the receiver or at least place it in so he won’t get killed. DJ looks to be a natural at that.

And yes, when watching Duke highlights, what really got me excited was his rolling out ability and his ability to take off when the opening was there. These qualities make him special In my opinion and I feel so relieved picking him up this year vindicates our taking Saquon last year. Now we have both!
...
christian : 8/17/2019 12:19 am : link
I was sitting just a few rows up field level on the opposite side of the TD throw and could see the entire play and throw develop.

Literally first thing I thought when the ball left his hands "that looks like Brady." His touch is really that impressive. Really great thrower.
RE: there is much compulsive obsessive ideation on bbi, but nicknames may
Motley Two : 8/17/2019 12:32 am : link
In comment 14533471 plato said:

(But seriously, he needs to lose the Lloyd Christmas haircut!;-)

I just wonder who actually listens to these crews. Ex athletes and talking heads spouting nonsense half the time. Really, really shallow shows from an analytical standpoint.


It also went viral on Instagram. Over 194,000 views on the Giants official Instagram.
Link - ( New Window )
Any time anyone insults Matty ice
bhill410 : 8/17/2019 6:23 am : link
I take it personally as I was at bc when we gave it to him. You realize it’s specifically based on Natty Ice right and thus awesome? People are such dumb dumbs

the rest need a lot of work

That's why the BBI armchair analysts are to be taken with a grain of salt.

Unless they are Joey from VA, Dorgan, ect..


Definitely a missed opportunity not going with CD when I re-registered.
Pages: 1 2 <<Prev | Show All |