NFT: Indians at Yankees GDT 8/18 Going for the series win 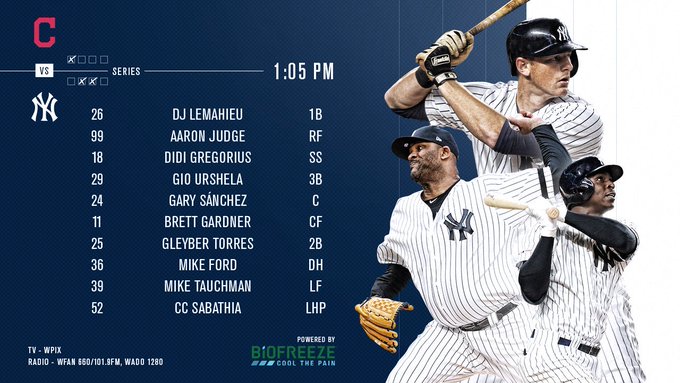 
Probably hasn't washed it in a week or so.

I turned it off to watch golf. Freakin pointless to watch this and get angry at the calls.


why?
Excitement was short lived
adamg : 8/18/2019 4:49 pm : link
at least Judge got a hit. He needs to get going
Oh well.
section125 : 8/18/2019 4:59 pm : link
There will meetings in the league office tomorrow and I'm sure there will be some video to show what looked like bias today. They will still have to be careful so as to not cause the umps to look for excuses to squeeze them later this year.

But they will need to look real hard at CC. Yes his 1st game back, but I don't know what that was in the 2nd inning. Great 1st inning, good 3rd and what looked like knee pain in the 2nd.

6-2 homestand is excellent. Splitting with the red hot Indians was good in a bad starting pitching rotation situation that was unfortunate.
6-2 on the homestand
Eman11 : 8/18/2019 5:04 pm : link
I'll take it especially considering the two losses came at the hands of the tail end of the rotation to a pretty darn good team in the Indians.

Yanks have been insanely good at home this year and I'm all for going for home field. Not at the expense of overusing the pitching but keeping the team playing exactly as they have this year. Keep the foot on the gas and no coasting to the finish line.

The umps are making it really hard
NYerInMA : 8/18/2019 5:07 pm : link
for me to watch these games. I love the Yankees and baseball and to continually see the umps screw things up with bad call after bad call really ruins the fun for me. The first pitch to Judge at the ankles that was called a strike in the 1st was ridiculous and set the tone for the whole game for me. MLB really doesn't seem interested in holding the umps accountable for the sh*tty job that they're doing and it drives me nuts.
RE: if I ever catch a HR I don't care who the fuck hit it
Carson53 : 8/18/2019 6:12 pm : link
In comment 14535032 Jints in Carolina said:
.

..CC was gonna come off the injured list and light it up on his first start back on the mound???