"I would love to start Daniel. But you'll have to ask Mr. Mara what he's thinking today..."

I have legitimate reasons to think the arrow is pointing up, I have not felt that way in bit. There is no need throw a bucket of water on everything. Join us in our enthusiasm.


Do you honestly believe that's the prevailing sentiment regarding Jones here?

I know you're smarter than that.


He was asked a direct question about what the owner said. How else was he supposed to answer the question?

Smh
Not related - but seeing a potential star on the 'rise'
Canton : 8/23/2019 1:04 pm : link
And another, actual star, beginning to fade to the foreground, is a bit disheartening.

This photo says it all.. 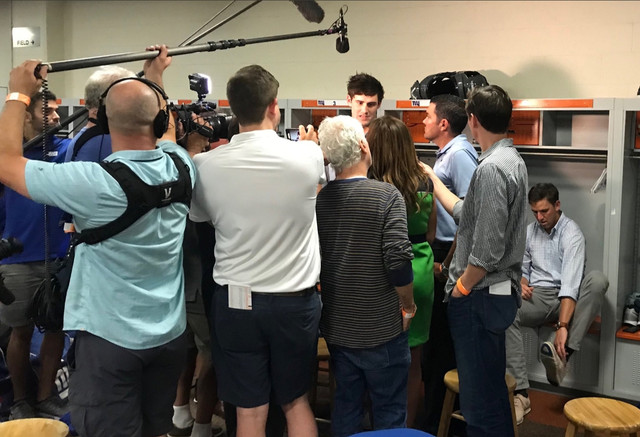 I hope Eli can have his one last hurrah this season.


We should be okay with that. We need one...
Think the shock of the Giants taking Jones
TMS : 8/23/2019 1:35 pm : link
with the sixth pick is starting to wear off because he playing well so far. But with all that defensive talent available when they took him it is only natural some panicked and overreacted. Think most are over it now but if he flops later it will come back with a vengeance. 6th pick should get a starter somewhere hope he turns out to be it.
RE: RE: It’s a good quote
Les in TO : 8/23/2019 1:35 pm : link
In comment 14541504 TrueBlue56 said:
False. Shurmur was asked whether Eli was still the starter or if Jones has altered the plan? Mara was not referenced in the question. Maybe you should spend less time smacking your head and more time reading or listening
Said it b4, whether it's CC, other media or even fans / posters
ChaChing : 8/23/2019 1:37 pm : link
nothing we're seeing now is much different than what he did through college and in his short NFL camp & preseason experience. Obviously we still can't be sure as it's tough to judge if a player's skills will translate to the NFL (esp when looking for a franchise QB). But the surprise is funny to me. He's always been accurate, athletic, take hits, focused on the next play (iirc a lot of the same stuff EA saw in Eli)

All in all I don't mind people being for or against. Like that McShay / Kiper vid where they both acknowledge many of the same traits, just have different evals. One thinks he's a career backup, the other a solid starter

But it's also clear many simply didn't watch him but formulated an opinion (which, tho is par for the course these days, makes no sense at all). Esp those who were ranting against him, but now bothered to actually watch him play. The slew of people with opinions who are now surprised that he's doing the same shit he's always done on the field...I don't get it. He's certainly passed every NFL test so far (small sample & preseason / practice aside), still it's much the same from his tape esp at Duke...
RE: My favorite was Manish Mehta
Strahan91 : 8/23/2019 1:38 pm : link
In comment 14541461 bceagle05 said:

Mehta might be the worst sports reporter that the NYD has and that's really saying something given how terrible Leonard and Bondy are. He's a bigger Jets fanboy/homer than your average BBI poster is with the Giants. I'm embarrassed for him.
RE: Arc...
Brown_Hornet : 8/23/2019 1:41 pm : link
In comment 14541467 Tesla said:

Why would that bother you?

I called him GOAT.

Pull the panties out of your crack...football is fun.
Solid point by Shurmur
DonQuixote : 8/23/2019 1:47 pm : link
The media asking Shurmur to comment on how Jones is doing well is BS. Shurmur has been solid and consistent...they have always expected him to do well and are pleased but not surprised.

Why should Shurmur respond to a climate of low expectations that he did not create? All that stuff should be asked of the detractors.


Eli had plenty of reporters around him right after this was taken.

My main issue with him was a form of spacial recognition/anticipation with regards to where defenders will be by the time the ball reach its target.

I saw a number of plays where he threw into a windo only considering the primary defender covering the reciever. He wasn't considering secondary defenders. I.E. Bracket coverage, either over under, or inside outside. It seems like he only accounted for one of them. Another situations was a secondary defender reading and jumping on the play. Like a corner reading the throw and pealing off the outside guy to jump the inside route. We won't know about these issues until real bullets are flying and defenses are disguising coverages.


Todd Mcshay called gettleman an idiot and called jones a 3rd day pick who would be a career back up..

Every radio show killed gettleman and said the giants were run by morons
Mike Francesa said the team was run by morons.
bceagle05 : 8/23/2019 10:36 pm : link
A team with four Lombardis added to the trophy case over the past 30 years. The same Francesa who never criticizes Jim Dolan.

Q: John (Mara) said that in a perfect world Eli would play the whole year, because that means you’re having a good season and Eli is having one. Is that the case that Eli is your guy, or does Daniel have a chance?

A: John owns the team, right? We’re on the same page. There is really not much more to say. I think I’ve been saying it all along. I just get a sense once in a while that when I answer those questions nobody believes me. Well you heard it from the owner.


I recently watched a clip from that Shannon Sharpe-Skip Bayless show. Sharpe made a point about how if a coach or a GM is wrong about a player, it can get them fired. But if an analyst is wrong about a player, no one cares. There's no accountability on that side of things.
RE: Not related - but seeing a potential star on the 'rise'
short lease : 8/25/2019 1:58 am : link
In comment 14541508 Canton said: