Hold on...looking it up because there is no way Greg...yup UVA alum.
As Zeke has said, this story is false.
Mad Mike : 9/9/2019 3:28 pm : link
The only Sean Taylor jersey was the one being worn by Scott. The coffin had t-shirts draped on it, neither of which appears to have anything to do with Sean Taylor. (In the video of the fight, only the red shirt is still on the coffin, but it is, nonetheless, still not a Sean Taylor jersey). 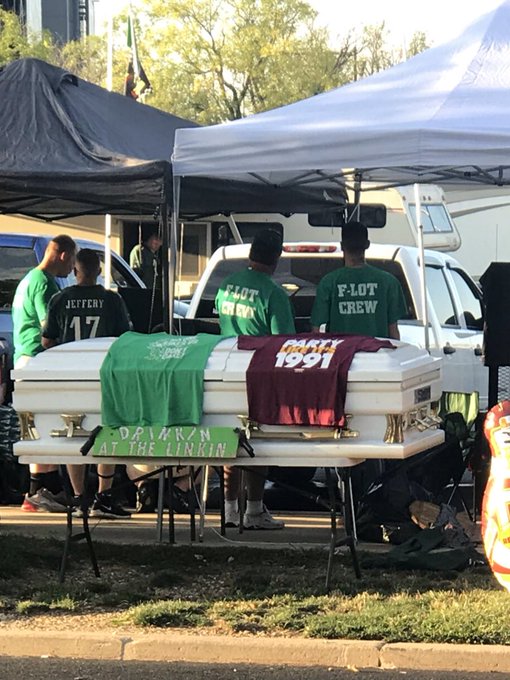 
Is everyone just pretending they don't see this post?


Big Mike has a special place in our hearts because he chose to stay when Tony Bennett was hired, unlike pussies like Tristan Spurlock and Jeff Jones who ran away. Was our first First Team All-ACC player since Sean Singletary and helped build the foundation that led to budding powerhouse.
It doesn't matter
Coach Red Beaulieu : 9/9/2019 3:44 pm : link
If this physically, literally, imaginatively, metaphorically, symbolically did or did not happen in the actuality in a metaphysical sense. Eagles fans are skrubs.
RE: I'll wager
Mad Mike : 9/9/2019 3:45 pm : link
In comment 14568592 Joey in VA said:

Uh, sure. Treat yourself to a milkshake.
Sean Taylor aspect aside, who...
Crispino : 9/10/2019 7:08 am : link
the fuck has access to, and has the inclination to bring a coffin to a tailgate? People are fucking stupid and weird. Eagles fans have a reputation that is well earned.