He should have pitched to Bradley..even meatballs.I hate walks to the #9 hitter.
Playoff rotation setups if I were manager
dpinzow : 9/9/2019 9:47 pm : link
Home field advantage:


Not true. JBJ is a very good CF. Many people argue that Benintendi, Bradley and Betts is the best defensive OF in baseball.
I know he's an excellent defensive player.
shockeyisthebest8056 : 9/9/2019 9:55 pm : link
I was just annoyed.


I could live with that. I like you having German at home no matter the game and it's what I've been saying for a while now. Not only do his stats show he's better at home but I think in a pressure game he'd just feel more comfortable at home as well. Put the guy in the best position to succeed and that's at the Stadium.
FWIW, Voit has smacked the
section125 : 9/9/2019 9:58 pm : link
ball very well tonight. He has had a few hard hit liners in this series. Maybe he is about to start raking?
RE: RE: Playoff rotation setups if I were manager
dpinzow : 9/9/2019 10:01 pm : link
In comment 14569500 section125 said:


If Sevy comes back and dominates then that's a nice problem to have. I'd still pitch him and Tanaka away. Tanaka is the most mentally sturdy pitcher we have and Severino has the most dominant stuff that can shut an opponent down regardless of park.

Paxton being a lefty is more advantageous at Yankee Stadium than on the road as he gets to pitch to the deeper part of the park against lots of right-handed power. Additionally, Paxton would try to neutralize an opponent's lefty power by making them hit the other way, away from the short porch. German is brilliant at Yankee Stadium but gets crushed on the road
RE: RE: RE: Playoff rotation setups if I were manager
section125 : 9/9/2019 10:05 pm : link
In comment 14569520 dpinzow said:


Yeah, I like your rotation(s). I'm just thinking we will get more innings from Sevy if he continues pain free. I was thinking German/Sevy combo or Green/Sevy combo last week before the news came back of Sevy doing well.


--I trust Tanaka to deal with a crazy road crowd
--Severino isn't a kid anymore; when he returns he gets big boy responsibility because his stuff can shut down a lineup regardless of location
--Paxton being a lefty should get priority pitching at home, plus his form has improved to the point where he can credibly pitch against another team's ace
--German will be fired up by the home crowd but could wilt against a playoff crowd in Minnesota or Houston (most likely opponents)
Gardy needs time off.
section125 : 9/9/2019 10:31 pm : link
His ABs are so weak. He's been super resilient this year, but it looks like he needs a few days off. Defense is fine, but the ABs are bad.
RE: RE: RE: Does Voit look like
Percy : 9/9/2019 10:33 pm : link
In comment 14569591 section125 said:


He rehabbed it. It is just a pulled muscle and not really the same as a real hernia. Maybe it did not tear that much.
Jackie Bradley
section125 : 9/9/2019 10:38 pm : link
again? Amazing that Leon, Bradley and Velasquez kill the Yanks pitchers.


Good to see him get a couple of hits tonight and his first RBI since returning but I do think he's still dealing with that injury at least somewhat.

He didn't look like his normal happy pumped up self even after getting that RBI. Almost looked like he's fighting through it, with more relief than anything else. 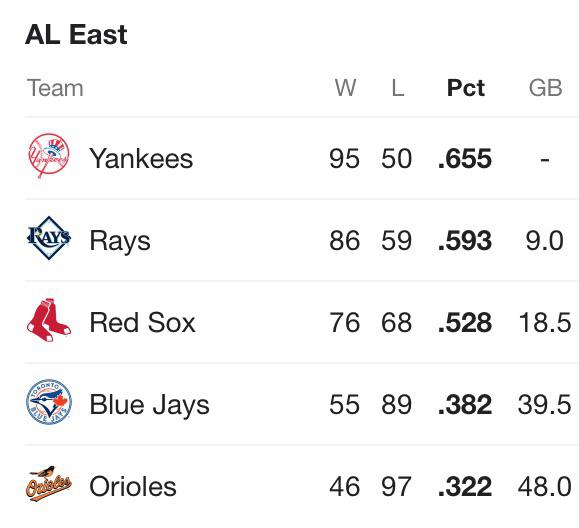 
He's been a little angry at himself since he came off the IL. He hit so well in AAA, but has been spinning his wheels since he came off IL on the Yanks. I think he's had numerous good ABs that netted zero results. The last two nights he's ripped the ball but right at people. But at least last night he had some solid hits.
IDK if he is still sore, but I thought his disposition last night was "finally/relief." He also has to know that he needs to hit or may not make postseason because of the OF injuries. A healthy Encarnacion is a lock. He is a better fielder and he is a dangerous hitter. Let's face it the Yanks best lineup has DJLM 1B, Torres 2B, Didi SS, Urshela 3B with EE as DH. Stanton as a viable OF allows Voit to make the roster as DH/1B.

Now if Giancarlo comes back healthy, a lot of pressure comes off the outfield roster. Maybin becomes the back up. It may also put Wade on the roster as a defensive replacement. Losing Tauchman was a big blow defensively.
RE: RE: RE: RE: RE: Does Voit look like
Eman11 : 9/10/2019 8:04 am : link
In comment 14569784 section125 said:


Yeah section, finally/relief is a good way to put it and what I meant about his mental strength. No doubt his struggle since returning were wearing on him and it was showing. He did look more relieved than excited or happy last night.

I'm just used to seeing the pumped up, happy and energetic Voit out there and hope it is his struggles that is keeping that down and not because he's fighting through the injury and is just hoping it doesn't get worse.

The Tauchman injury really does suck and I feel for him. The guy got a shot, made the most of it and to have this happen so late in the year is a big blow. Now we're hoping Stanton can come back more out of necessity than a luxury or OF insurance. I do think if he comes back he has to be able to play the field,and if he can't I can see the Yanks leaving him off the playoff roster.
RE: RE: RE: RE: RE: RE: Does Voit look like
section125 : 9/10/2019 8:25 am : link
In comment 14569795 Eman11 said:


I’d add Happ and cut down on one guy getting two starts. Look for 6 quality innings from each guy and lean on the bullpen. If someone pitches lights out obviously let them go deeper.

Banking on Severino for two starts on a pitch count seems foolish. Just add another starter to the rotation and keep everyone as fresh as possible.

None of these guys are aces. You should be pushing for multiple starts on short rest if you have an ace or two that you want multiple bites at the apple with.
Pages: 1 2 3 <<Prev | Show All |