Yes, please elaborate. Inquiring minds want to know.
Any professional athlete that denies a reasonable request
jcn56 : 9/10/2019 1:39 pm : link
for an autograph from a kid should be ashamed of themselves. They're entertainers, and these are their customers.

The guy is an asshole. He always has been.
Took my kids to a Yankee game recently...
Tesla : 9/10/2019 2:29 pm : link
and caught batting practice. During BP one of the Oriole relievers was tossing balls to everyone wearing Orioles gear but refused to give a ball to any Yankee fans. I had no problem with it and somehow my kids survived the trauma.

A 10 year old didn't get an autograph while wearing his rival's gear. Boo hoo. How will he ever recover?


I bought a picture from the mall in Albany to get signed by him. It was of him sacking Favre for the record. The very first time I'd ever been to New York let alone Giants training camp. I go up to him and ask him to sign. He replies "I see you here every fucking year when are you going to give up?" I argued with him for a good 3-4 minutes that I live in Florida and it was the first time I've ever been up there. He finally signed, but continued to have an attitude and gave me a shit autograph.
Shelley Duncan knew the right way to do it
Greg from LI : 9/10/2019 3:57 pm : link 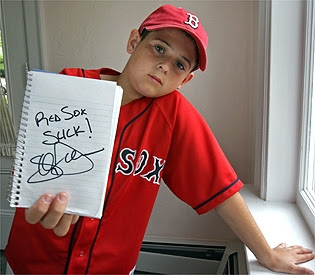 
Ha... I imagine the kid would have made Lawrence laugh and change his mind if he'd said, "I don't want an autograph from anyone on the Giants D!"
It's a grey area. The simplest and nicest thing would be for him to
Ira : 9/11/2019 5:47 am : link
just say yes to the kid, but I get that he's uncomfortable doing it for someone wearing a rival jersey.
Mountain out of a molehill
Festina Lente : 9/11/2019 7:20 am : link
If anything his parents should be the ones called out for not explaining basic fandome rules of engagement.