Oscar : 9/17/2019 10:17 am
Greatest Giant if my lifetime, 2-0 against the GOAT in Super Bowls. Class act all the way. Sad it’s over although it is certainly time. Thanks for everything Eli.
Pages: 1 2 3 4 5 <<Prev | Show All |  Next>>
I would have loved it to end differently,
an_idol_mind : 9/17/2019 3:10 pm : link
but the joy he delivered early in his career far eclipses the unfortunate circumstances of the past few seasons.
Thank you Eli Manning
gidiefor : Mod : 9/17/2019 3:10 pm : link
We football fans are all interested in feeling the joy of the ultimate prize. It is prize that is mostly illusive. You delivered this prize to us twice, and it was in classic style, in memorable fashion, and awe inspiring. You are and were AWESOME!!!

Thank you! Thank you! Thank you! From the bottom of my heart. You delivered the greatest thrills and I will always appreciate and remember them until I leave this earth.
The San Francisco playoff game
Frank in Silver Spring : 9/17/2019 3:12 pm : link
Was the pinnacle of professional toughness and a steely will to win. Ditto the two Green Bay playoff wins. Here's to you, Eli, on a terrific career. the last NY Football Giant to wear #10.
I hope the Giants release him so he can possibly catch on
Rudy5757 : 9/17/2019 3:14 pm : link
with a playoff contender of his choice. Do the right thing by him rather than have him sit on the bench. I think there are a few teams right now that could use a QB. Have a great press conference farewell to Eli and let him sign with another team. No trade, just a release so he can do it on his terms.

That would be the only positive way to end this imo.
Thank you Eli
jamison884 : 9/17/2019 3:18 pm : link
You will be included in the sport's history forever, and not a single NYG fan present or future will forget your contributions.
Eli Manning
BigBlueCane : 9/17/2019 3:23 pm : link
will be one of the greatest players who ever suited up for this franchise. And his worth will be forever debated by those who never saw him play nor researched the circumstances surrounding his time here.
Eli lead this team the right way for a very long time
Sneakers O'toole : 9/17/2019 3:28 pm : link
And gave us some of the greatest sporting memories imaginable. Will always love #10!

Thank you Eli!
Thank you, Eli..
KingBlue : 9/17/2019 3:29 pm : link
You represent everything one could ever ask for in a player. You have given me the greatest thrills as a Giants fan. I am proud to be an ELi Manning fan. Words cannot express what an honor it has been to root for you and our beloved Giants.

Eli did what very few athletes, only the truly special ones, can do: they make you proud to be a fan.

Thanks Eli
Thank you 10 ball
NYG007 : 9/17/2019 3:56 pm : link
For all the memories and the 3 months of playoff football that helped seal the Bond between a father and son watching our Giants win championships.

You'll be a Giant forever and loved by all Giants fans (even the morons who didn't appreciate you)
Thank you thank you thank you!!!
Steve L : 9/17/2019 4:13 pm : link
You got drafted the day my cruise ended in San Juan. I ran to a bar at the resort to see who we got. My kids were 5. You’re the only qb they’ve ever known.

The first Super Bowl run I was out of work but got a job right after the Tampa win in round one. They didn’t need me to start until two days after the Super Bowl game. It was a great few weeks.

The second one, I had a botched colonoscopy that had me in the hospital after surgery for a few weeks and home recovering for 10 more. I just sat around in my glory.

That would be a great listen today
I've often been a critic but
Marty866b : 9/17/2019 4:23 pm : link
As a fan of the team since the mid 60's, Eli Manning is the classiest player to wear the Giant uniform. Eli played his best on the biggest stage and I thank him for all the great memories he has brought me and my fellow Giant fans.Again, thank you.
Love Eli!
GeoMan999 : 9/17/2019 4:26 pm : link
Heart and soul of team, will defend him until my death. Fully deserving of Hall of fame!

I know there was a thread on jerseys earlier... my dad's last gift to me before he passed away in 2010 was an Eli jersey. I'll never buy another or wear another in my life.

Thank you Eli Manning. You are the greatest of all time.

Thank you Eli Manning.
mittenedman : 9/17/2019 4:45 pm : link
One of the All Time Greats in NY Giants history. What a tremendous job you did with everything expected of the New York Giants quarterback, on and off the field!

14 games left, with a rookie QB - it may not be over.
Giant fan since 1971....
Tark10 : 9/17/2019 5:05 pm : link
Watched many games over many years. Watching the leader of your team for so many years step aside is never easy. The organization will treat him well in the end. Phil Simms wasn't as fortunate. I remember when John Unitas was released and played a short time for the Chargers...SAD.. The worst exit was Joe Namath being buried in the mud in a Rams uniform on a Monday night game in Chicago in 1977....
Good Luck Eli
WillVAB : 9/17/2019 5:06 pm : link
Very easy player to root for and easily one of my all-time favorite Giants.

Best of luck with the next team and it will assuredly be a better situation than this dumpster fire.
Hotty Toddy and Go Giants!
FranknWeezer : 9/17/2019 5:07 pm : link
Proud of all you've done as an NYG!
See you around in Oxford.
I grew up on LT and Simms
IIT : 9/17/2019 5:40 pm : link
But Eli is my all-time favorite Giant. His first Superbowl run is my all-time best sports memory. I can't imagine either will be equaled or surpassed in my lifetime.

Conerly belongs with the elite three. Tarkenton and Collins had great years with other teams as well.

An all time legendary Giant.
Mike from Ohio : 9/17/2019 6:42 pm : link
The end is not what anyone wanted, but nothing could detract from his legacy as the best QB in franchise history. The two Lombardi Trophies he brought to New York secures his place in team history, and with the fan base. Couldn’t have asked for a better person to represent the Giants.

Can’t wait to see him inducted into the Ring of Honor, and then the Pro Football Hall Of Fame.

Thank you, Eli!
Big thank you to Eli. He deserves to be starting, still.
BUgiantfan : 9/17/2019 6:45 pm : link
2011, in my opinion, was the greatest season any quarterback has ever put together. That was a 6-10 team that Eli simply willed into a championship. I remember being down 12 points against Dallas in the 4th quarter and thinking to myself, “damn! This team is ruining a truly historic season for this QB.” I really felt that Eli did everything a qb could to win that game but simply couldn’t overcome the team around him.

Good luck in your post Giants career, Eli.
Thanks Eli
CardinalX : 9/17/2019 7:09 pm : link
.
Love Eli
Steve in ATL : 9/17/2019 7:19 pm : link
Two unbelievably great upset Super Bowl victories and the MVP of both games. So tough in that SF championship game. An iron man. Always classy. My all-time favorite Giants QB even though I loved Simms too.

Jones has big shoes to fill.

Eli is my favorite athlete of all time..
Sean : 9/17/2019 7:26 pm : link
He was named starter when I was a freshman in college, I’ve watched him play for an entire generation. He represented the NY Giants with class & helped deliver 2 SB titles. I’ll miss watching him on Sundays. I true throwback athlete/QB. 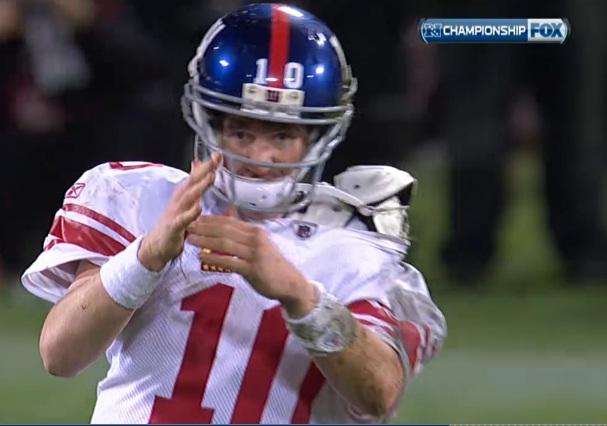 I’ll defend Eli to the death
djm : 9/17/2019 7:40 pm : link
The NYG franchise took on a different glow the minute Eli was drafted. Despite the hyper critical takes from far too many concerning the trade up Eli brought credibility to a franchise sorely in need. We were blessed with winning football from 05-2012 and even those last few losing years with coughlin the giants offense was productive, save 2013. I wish Eli retired after 2016 as it would been nice to remember him as the only giant who showed up in Green Bay.

We can only hope that jones is half as good as Eli was here. Or at least half as successful.

So many big plays and great moments. Thanks Eli.
I take back my comment about him retiring In 2016
djm : 9/17/2019 7:48 pm : link
That’s bs and unfair. Shit you’d have to drag my ass off the field if I played pro football. I just meant that the perception of Eli from some is sad to see. The guy was a winning player who played on some shitty teams, lately.

Whatever, Eli Manning can sit at the table with all the other bad ass QBs they delivered in big spots. That’s all that counts. He’s also the last guy to deliver a title to NYC NJ metro area. Unreal.
Eli
BleedBlue : 9/17/2019 8:20 pm : link
Thank you for everything. A true class act and the greatest Giant of my life time. #10 was a constant for the Giants on Sunday for a long time.


Agreed. The elation I felt in that moment when Eli hit Burress for the TD has never been matched by any spectator event I've witnessed on TV nor in person. Absolute pure joy I felt in that moment.
Eli, legend, Hall of Famer, 2x SB champ and MVP,
dpinzow : 9/17/2019 8:37 pm : link
Walter Payton Man of the Year. The greatest QB to ever play for this franchise
I went to the first game he ever started
Leg of Theismann : 9/17/2019 8:37 pm : link
It happened to be on my 17th birthday, Nov. 21st, 2004 (which is kind of special). Went to the game with all my friends and unfortunately watched them lose to Vick and the Falcons. But to think that here we are 15 years later and I likely just watched him start his last game for NYG... what an incredible run that included by two greatest moments as a Giant fan. Having been born in '87, I wasn't alive for XXI and I have no memory of XXV. Until Coughlin and Eli came along, being a Giant fan for me simply meant a lot of disappointment. As bad as they've been the past 5+ years, I still say it feels quite different to be a Giant fan now. Thanks, Eli!
Thanks Eli
Giants86 : 9/17/2019 8:41 pm : link
For never getting injured.
For giving us 2 Championships
For always being a professional
For all of those enjoyable Sundays
And most of all for always being a stand up guy in a league where it’s not to often found.