NJLCO : 9/18/2019 12:38 pm
Yesterday someone called into the FAN and asked a somewhat interesting question...what if the NYG get the number one overall pick in the 2020 draft? How do you pass on the QB from Bama...and the actual possibility of getting the number pick really could come down to the Miami game. I was a believer in an 8 & 8 season up until this past Sunday. Our defense is really bad at this point and we can keep saying how young we are and we will get better with time. I just don't see it on that side of the ball. I keep hearing about Baker only having 4 half's of NFL football under him and he is 1 on 1 guy and not zone. That all may be true but also add on he isn't very strong at the point of attack. He almost pulled an Eli Apple on Sunday and ran away from contact on the goal line.
Love Eli #10 and wish DJ the very best for a long time as well.


This rests the case. Nobody is touching the Dolphins.

But if Jones looks really bad and the team is an utter disaster on the field and in the locker room, a complete house-cleaning from the GM down should be on the table, with the replacements having the full freedom to use the premium pick as they see fit, QB or otherwise.
RE: They would likely take Young
Nine-Tails : 9/18/2019 12:48 pm : link
In comment 14586165 LakeGeorgeGiant said:


Just take Young, it’s an easy call. He can wreck games. Second option is trade down, but not too far down, I.e. staying in the top ten. There’s a lot of other talented guys, but don’t see how they could pass on Young with the state of the pass rush as it is now.
Edge sure OR
Amtoft : 9/18/2019 12:48 pm : link
how about that WR from Alabama. If you are investing in Daniel Jones lets not do what we did to Eli which is give zero OL and hardly any top WRs.

If you have a top 3 pick and have a chance at a QB, you take the QB if you are unhappy with the progression of Daniel Jones. Otherwise its a trade back and acquire another 1st round pick or take BPA
I think we trade back and collect assets
UConn4523 : 9/18/2019 1:02 pm : link
but I also don't know if Tua is a lock at #1 anyway. I need to see a healthy season from him. But that doesn't even matter as Miami will take thei favorite QB at 1 overall.


So far this year against 3 door mats Tua has elite accuracy.

Look, I like Tua. His biggest asset is his ability to move. A plus improvisor. I think he has a decent arm as well.

But I'm concerned about his size and he durability. And like Haskins last year (I like him better than Haskins), he's playing with a team stockpiled with pros on that offense. So I struggle with how his skills will convey to the next level where he'll likely not have that luxury. He has a track team right now with great hands who get great separation. Pretty comfortable environment to succeed...

Worry about how we can get him a playmaker like Jerry Jeudy or Shenault
The tough part is trading back
Dinger : 9/18/2019 1:09 pm : link
All things being what they are today there should be a number of teams looking for a QB, a few good QB prospects available and then everyone knowing that you aren't looking to pick a QB. So will they get that 'kings ransom' that everyone assumes is so readily available for the #1 pick? I think maybe you do what the chargers did in '04 and pick the QB that you know a team wants, then trade him for the kings ransom. The Chargers got some good players as a result of taking Eli and trading him. The current assessment of Jones is that we wont NEED to get a QB in exchange for our pick. So thats my play....
Get Miami to give us the 2 and maybe Pitts first
eli4life : 9/18/2019 1:10 pm : link
Allude to someone else moving up to one gat Miami to bite then get young at 2 and have another number 1
I don't think it's shortsighted at all
AcesUp : 9/18/2019 1:10 pm : link
The Dolphins are unapologetically tanking and the players are demanding trades or checked out. They are 22.5 point underdogs this week. Even if the Giants are Rutgers, the Dolphins are Murray State. They are in a different league of bad.

Also, as is the case every single year, Tua and Herbert are now under the microscope and getting holes poked in their games. There's already chatter than Jordan Love will be the #1 overall pick, neither appear to be slam dunks worthy of junking a plan premature. There is some intriguing top level talent at other positions of need as well, so you trade down and collect assets if by some miracle the Giants are worse than the Dolphins.
Jordan Love...
bw in dc : 9/18/2019 1:16 pm : link
is a very good prospect. Tremendous ability to change arm angles...

I tell you what as well - Utah State has some pro receivers, too.
If Jones plays well, you trade the pick.
Section331 : 9/18/2019 1:19 pm : link
You'll have a guy who has proven he can play at the NFL level, I'm not trashing that for a guy we THINK may be better. Personally, I think Tua is a little overhyped. He'll be a good pro, but I don't see a generational talent. 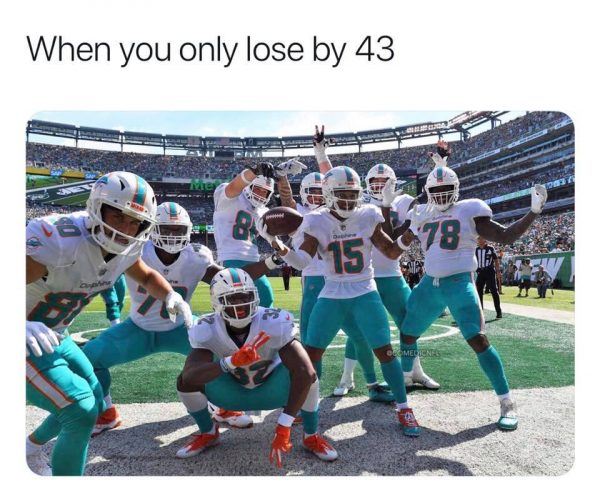 If Jones
lax counsel : 9/18/2019 1:29 pm : link
Is so bad as to make that a possibility, then I think it would also take a regime change to bring that to reality, like we saw with the Cardinals. The Giants aren't that forward looking or reactionary. Otherwise, I think he gets at least all of 2020.
I think it's really about if they find themselves with the #2 pick
allstarjim : 9/18/2019 1:35 pm : link
And I would trade down, like the Rams did in the trade to the Redskins to they could draft RGIII, and the Browns did to trade down to the Eagles who drafted Wentz in 2016.

And sure, these QBs (Tua and Herbert) might not go 1 & 2, but just as easily, someone like K.J. Costello could rise up the draft boards.

I think the Giants could find themselves in an enviable position if they lose enough games.
Only solution I can see is
tyrik13 : 9/18/2019 1:41 pm : link
Trading down. No one is touching the Dolphins though, they’re tanking big time so there’s no way we’ll get first. At second though, I’d still think about trading down to acquire more picks. I’m not sold on Young like everyone seems to be, to me I don’t see quick twitch or bend from him to be an elite talent worthy of a top 2 pick. Yes we need an Edge, but we also need a number 1 receiver and my top 2 picks are Jeudy, who has OBJ like potential and Shenault who reminds me of TO but with better hands. I’d go AJ Espansa in the second and yetur gross matos with that other acquired pick or O-line as well with a RT in the 3rd.
I'd trade down.
BrettNYG10 : 9/18/2019 1:42 pm : link
If we had the 2021 #1 with Lawrence available (and presumably another year of game tape with Jones), yeah I'd pull the trigger.
Should be several QB prospects going high in draft
Jimmy Googs : 9/18/2019 1:47 pm : link
As long as young Daniel isn’t a train wreck have to consider mortgaging that early pick for multiple extra picks if able.

It remains fairly obvious Giants need help almost everywhere. And the quality over quantity argument doesn’t hold up when you keep looking clueless on both sides of the ball.
If we somehow end up with the #1
beatrixkiddo : 9/18/2019 2:01 pm : link
I’d take all of the Dolphins picks they have accumulated so they can get their guy Tua.
RE: If we somehow end up with the #1
Nine-Tails : 9/18/2019 2:02 pm : link
In comment 14586424 beatrixkiddo said:


When you don't try to tank, but still beat the Dolphins to the number one pick >>>>>>>

They might not have been Moss, Carter, and Reed, but let's not make the Giants' WRs during Eli's career some sort of massive weakness that he had to overcome. This is really the first year that the Giants entered the season with such a mediocre WR group. For most of his career, he's had good to very good WRs to work with.
RE: RE: Edge sure OR
Nine-Tails : 9/18/2019 2:45 pm : link
In comment 14586479 Gatorade Dunk said:


The OL has not been the problem. When our D allows > 20 points in the first half it has us playing catch-up, neutralizes our best player, and forces us to go in a direction where we lack the horses (passing game).
QB is by far the most important position
TD : 9/19/2019 6:48 am : link
If we get a shot at a great one, I wouldn’t be opposed to drafting him and letting it play out between him and DJ over the next year or so. The loser gets traded - hopefully for significant draft assets.


I do not want another Kyler Murray/Josh Rosen situation.