AJ23 : 10/10/2019 11:42 am
Great longread just posted, by Ben Baskin, about what the past few weeks have been like for Eli and his family.
The Final Days of Eli (Or Not. With Him, Who Knows?) - ( New Window )
This is what the detractors have never understood..
Chris684 : 10/10/2019 11:53 am : link
As the clock winds down on a 28-14 loss, Eli heaves the ball downfield hoping for a miracle, like he so often does. The pass is intercepted. This pains Archie, who long ago stopped trying to convince his son to take fewer risks at the end of games that are already out of hand. When Archie was playing, he always worried that one more pick would land him on the bench. But he learned early in his youngest son’s career that Eli has never cared about stats, or optics, or potentialities. That’s just Eli.
great piece of journalism
Dankbeerman : 10/10/2019 12:08 pm : link
so rare these days. glad to see it was thought out and published a few weeks after the benching instead of a typo filled "hot take" 10 min after the news broke.
What a great article.
yatqb : 10/10/2019 12:11 pm : link
And what a great guy. Someone you’d love your daughter to marry.
That was fantastic.
Britt in VA : 10/10/2019 12:11 pm : link
.
I got to say
jvm52106 : 10/10/2019 12:13 pm : link
that was a nice read. There are parts there that explain Eli and at the same time explain why it was time for a change. The fact that Eli is so constant, so even keeled I guess, is part of what I saw wrong with the overall team as of late. Things and occurrences became common place, became just another day and that feeling overall can become negative without even knowing it.

Eli is Eli and he is a GREAT Giant but it was time to move on. I actually think the article really shows (speaks) to something I feel I have seen from sideline shots and just between play looks and that is a very relaxed Eli. Relieved really and who can blame him for feeling that way. 2004 was a long time ago. Hell, it was 4 kids ago for me. Christ, I was just closing in on turning 35 back then.


that part was weird, she puts two open beers in her purse?


the article say she puts them in a bag to bring to him.


when you're in a suite the beer is in cans and closed, its not like buying them from the concession stand.

At the end of every baseball game I played when I was younger you had a dog after the game. Kerry Collins was eating pizza at his locker after the SF debacle. 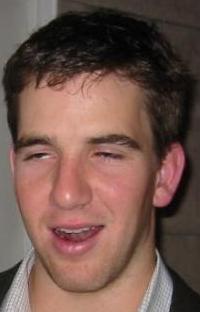 
Let the haters hate. Eli doesn't care and neither should you!
RE: Eli drinks Bud Light?
Milton : 10/10/2019 4:03 pm : link
In comment 14621331 Mike from Ohio said:
The whole purpose of that line in the story was to put in a plug for Bud Light. It was probably part of the quid pro quo. Very subtle but it had to be intentional (otherwise they would've just said "two beers").
Reading that he prefers ketchup to mustard on his hot dogs...
Milton : 10/10/2019 4:04 pm : link
...was disappointing.
Great profile
BBelle21 : 10/10/2019 4:46 pm : link
Thank you for posting it. Eli is a fascinating icon in that none of this icon stuff touches him. Not even a little bit. And how he makes sure it stays that way; how football is rarely talked about in his personal life. We watch these players like Mayfield, Odell, Cam, etc, willingly get swallowed up by fame. Eli keeps it away as much as possible.

This quote is amazing because it’s always the impression I got watching him “There’s an argument to be made, teammates say, that Eli is the last truly masculine player in the league, the old stoic cowboy archetype.”

The reality that it is the end of the road for Eli is tough, even if you've known that to be true for some time now.

From a football standpoint, it was time. Maybe even overdue. But, Eli wasn't just any old QB. For a lot of fans, I guess they're able to take emotion and loyalty entirely out of the equation - and in most cases, that's probably the smart approach. The Giants, I'm sure could have been a little smarter about how they handled it. But, ushering out a legend and a man of Eli's stature is no easy task.

Part of me is kind of just relieved that we've moved forward, though. It was hard to see so much of our own fan base turn(ing) on him for reasons that weren't really his fault.

I'll always be miffed by the way the latter portion of his career was handled, but I'll be forever grateful for SB42 and SB46 and all the years Eli gave us.

We were really lucky and fortunate to have had him all these years.
One other thing
Big_N : 10/10/2019 5:10 pm : link
Toyota? He really has to drive one of those for the sponsor? He never seemed like the type to ride around in Ferrari’s but I wonder if has one stashed away somewhere.

Another odd thing is that I think I recall more random Tom Brady page six photos and captions in the post than Eli . Kinda weird
What no one
Burt in Alameda : 10/10/2019 5:11 pm : link
mentioned is that the article is on the Sports Illustrated website which proves that, despite the massive layoffs last week and the questionable future of the magazine, some excellent journalists remain. This. of course, may be an aberration but we shall see.
Incredible article
CalZone : 10/10/2019 6:47 pm : link
"Eli has never wanted to be known or understood. He’s never worried about how he’s viewed. When people tell him to start a Twitter account, he truly doesn’t understand why anyone would care what he has to say. Even as the star quarterback in the league’s biggest media market, friends say he has clung to being a normal guy with a normal life. Privacy has always been a chief concern, and he often laments to those close to him that the camera phone is the worst invention the world has ever seen."
RE: That's my
PatersonPlank : 10/10/2019 7:38 pm : link
In comment 14621550 Photoguy said:


That's a nice article. Eli Manning doesn't read BBI. When people criticize him on BBI it's not disrespectful, because he's not reading and will never, ever see it.

The creations of these worlds where words on BBI take on these real world implications is super weird.
I agree with arc that it was time to move on.
SFGFNCGiantsFan : 10/12/2019 12:59 pm : link
Hell, it was probably overdue. But it is bittersweet because he's been a true Giant in every sense of the word. Selfishly, I really hope he does retire a Giant because seeing him is another uniform...ugh, I don't want to picture it.
Thanks for posting this
montanagiant : 10/12/2019 1:09 pm : link
A great article and it really illustrates how lucky we were in having him as our QB.