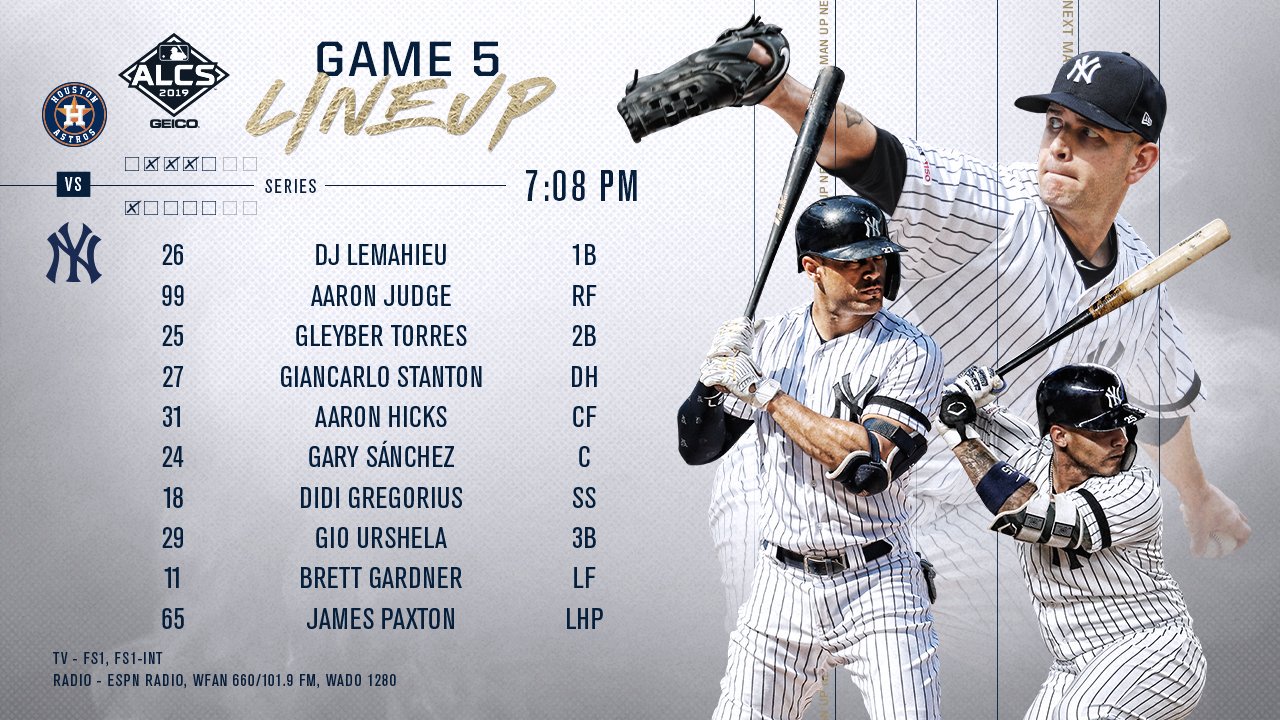 
Me too. Can never be superstitious enough.

--You figure that the combination of Kahnle, Britton and Chapman can pitch the last 4 innings (6th, 7th, 8th, 9th). Kahnle only threw 22 combined pitches the last 2 nights; Britton threw 18 pitches tonight and dominated for 5 outs; Chapman retired the side on 9 pitches and he's only thrown 2 innings the entire series

Ottavino can only go batter by batter. The moment he lets a runner on, he has to get pulled. Ottavino can also only start a clean inning in that scenario.

Then we have Happ, Loaisiga, Heller, and Cessa as bullpen guys (or in the case of Happ, a starter who wasn't good enough to get a spot in the playoff rotation. Severino has to be held back for a possible Game 7; Paxton obviously can't pitch after he threw 112 pitches tonight. I don't think Tanaka would be available either after only 1 day of rest
RE: Proud the guys nutted up and won
dpinzow : 10/18/2019 10:27 pm : link
In comment 14633249 The_Boss said:


Gonna need Otto to bounce back.

Would have been nice to have German this series huh.


I agree and don't think anyone can be superstitious enough in this contest.

Did not like Kahnle being off as he was. Everyone else on the mound was sensational. Hitters seemed to go back to sleep after the first. Just can't afford to do that tomorrow. One supposes they know that, too.
Game plan would probably go something like
KJG5173 : 10/18/2019 11:14 pm : link
Green for 2
Happ / lasagna / cessa combine for 3
Kahnle / Britton / Chapman for final 4
Not trying to be Debbie Downer
BlueLou'sBack : 10/18/2019 11:24 pm : link
and if the Yanks can pull off 2 straight Ws in Houston, woohoo!

But I wonder if people predicting "Yanks in 7" are largely the same folks who projected a Yankees sweep after game 1?


This Astros team is really fucking good, no BS there. And I can't see this team beating Cole. Too many swings and misses - still - at pitches outside the strike zone. Houston batters have more discipline and, it would seem, outstanding eyesight.


As they said on the YES post-game Thursday night with Chad Green, Kahnle was up and down for a while before he actually came in the game. That can have a real negative effect on a pitcher.

Great job by Paxton of just gutting this one out. Britton also did a great job.
Dave in PA...
BlueLou'sBack : 10/19/2019 1:22 am : link
Re "it's two games, crazy shit happens" yeah sure, but the sense I've had, since the second game, was the Yanks back was broke in that one, or rather after it. They came inches within a sweep of the first two, but Houston was simply too good behind Verlander.

This game the Yanks jumped V early, and Paxton had a great game to go 6 full, just dodging that last shot to the wall that would have closed it to 4-3 and IMO, changed the complexion of the game.

Baseball is so psychological, and the Astros aren't just good, they are extremely confident.


I think Saturday's game is advantage Yankees. Green sets the tone. If he gets thru 2 or maybe three I still feel the Yankees are in great shape. Won't leave much for Sunday, but you deal with that Sunday.

As badly as the bottom of the order has been for the Yanks, the Astros have been just as bad if not worse.

Also, Judge has done very little at the plate, his only 2 RBIs are the 2nd game HR. Basically only LeMahieu and Torres have been consistent.
Houston is Confident Because They're Good
Jim in Tampa : 10/19/2019 8:17 am : link
But categorizing the Yankees as a "broken" team just because they didn't Game 2 is nonsense.

The Yanks are confident too as they're a good team that has overcome a lot of adversity this year.

If they can get it to a Game 7 Houston will be heavily favored with Cole on the mound. But how many times have we all seen a game where two of the top pitchers for that year were facing each other, and everyone was expecting a low scoring game that actually ended up a high-scoring afair? And conversley, how many times have we seen a matchup of two scrub pitchers that we were sure would be a high-scoring matchup that actually became a 1-0 pitching duel?

It's baseball where past performance does not guarantee similar future results.

What a performance by him after a 1st inning that had everyone groaning and thinking this team was about to just roll over and die.

The energy in the stadium after the Hicks HR was incredible. That's what October baseball is all about.

This is still a huge climb with Cole waiting on the other side if we manage to push this to a Game 7 - but I like our chances again today against their BP guys with the momentum and confidence this team has right now.

Just force a Game 7. Anything can happen when you get there. One inning at a time. Been through adversity all year. They can do this.


No worries, I thought I was missing a point, lol...that's what happens when I try to understand some of the things you say!

Fewer posts has nothing to do with "the wind being out of the Yankee sails". When your team is losing it makes people likely to post for a number of reasons.

First posters want to bitch about the fact that they're losing. Then many of them want to tell you what they would have done differently, while others want to weigh in on all the changes they think the team needs to make to avoid losing next year.

Then you have the people who respond to all of those types of posts, including many "STFU" posts from people who don't react well to other posters bitching when their team is losing.

All that activity means a lot more posts.

It's like when you order something online and it does whatever it's supposed to do and you're satisfied overall. You're probably not going to rush to write a review or talk about it - you don't really have the urge.

But, if whatever you order arrives broken, doesn't work, falls apart... whatever. You're probably going to go let the manufacturer know how much they suck and make sure other people know about your bad experience.

There are and have been jackasses on Yankee threads all year who quite literally have only showed up in times of turbulence and have been absolutely nowhere to be found any time the team has been winning consistently or accomplishing anything positive.

When the team loses a couple games, though? There they are!

That's obnoxious and is separate behavior from what I'm illustrating in my prior post. Most of us have been here discussing the team all year - win or lose. Those select few posters... only when we lose or things seem to be getting muddled. Like mid-season when the entire rotation was getting absolutely crushed. They were out in droves then.

After the break, the Yanks went on a winning streak and were one of the hottest teams in baseball and they all predictably vanished.
Pages: 1 2 3 4 5 6 <<Prev | Show All |