Tittle 9 20 64 : 10/19/2019 10:26 am
Does anyone else suffer from sleep paralysis? More terrifying to me than any nightmare I’ve ever had.
I used to experience it frequently
DanBenton : 10/19/2019 10:31 am : link
When I was younger. It's been several years since I've had it happen though. Thankfully. When it first started occurring it was the most terrifying thing I had ever experienced. I eventually researched it and was able to realize what was happening, although is remained pretty scary every time. Don't miss it at all.
I have also researched it,
Tittle 9 20 64 : 10/19/2019 10:44 am : link
and try to calm myself while having it. Just doesn’t seem to help much.
One dream
Coach Red Beaulieu : 10/19/2019 10:44 am : link
Some entity was sitting on my back drilling into the back of neck. I awoke from the dream, in my dream. Went back to sleep in my dream and had the same dream. Woke again but realized I was in a dream. Had to go back to sleep and wake up again several times to wake up irl.

So sleep paralysis, nested dreaming and lucid dreaming all wound up into one, a pretty trippy mindfuck.
I did and wrote a year long research paper about it.
Optimus-NY : 10/19/2019 11:06 am : link
I wrote about it for my Honors Thesis for my 2nd BA. Fascinating stuff. 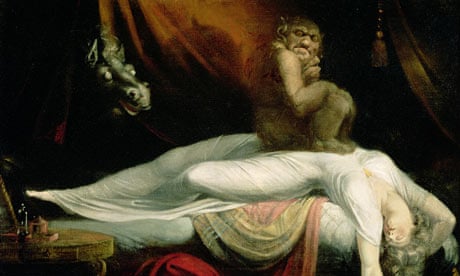 It's been explored in literature throughout the world, even Shakespeare wrote about it (see The Queen Mab speech for reference).
It's common and a natural defense
since1925 : 10/19/2019 11:11 am : link
The reason for sleep paralysis is to prevent sleep walking or other injuries that can occur by body movement during sleep. It's part of the body's natural defenses. It occurs in everyone to some extent. Some people never notice it.

It can be frightening as you enter a waking state. Many describe it as a sensation of being pushed or held down or even as a person sitting on your chest. But now that you know what it is, the fear should subside.
Dont sleep on your back (supine position)
giantBCP : 10/19/2019 11:14 am : link
.
I learned how to force myself awake
widmerseyebrow : 10/19/2019 11:33 am : link
Used to take great effort but now I'm able to do it more or less on command. Also learned that going right back to sleep after breaking out of it can put me right back in that state. Helps to stay awake for a minute or two and move around a bit.

Don’t eat too close to bed time. It’s not an old wives tale. If I eat a bunch of shit and go right to bed I am at higher risk.
I get it from time to time
Anakim : 10/19/2019 4:44 pm : link
Terrifying shit
My Goodness
BigBill : 10/19/2019 5:58 pm : link
I have been having sleep paralysis since I was 5. I started getting it more frequently since my 20’s. It really sucks. I was relieved when I finally found out what it was called, and that I wasn’t alone or “crazy”. I find that Valium, Klonopin, Xanax like medications (Benzodiazepines) help. I make sure I tell my significant other, now my wife, to push me really hard and do whatever it takes to make sure I wake up ASAP if I’m twitching trying to get her attention while having one of those frightening attacks. The one thing that helps me go back to deep sleep if no one is around to help me or if I can’t shake myself out of that episode is keep repeating a prayer (our Father etc.).
WTF?
BlueLou'sBack : 10/19/2019 11:41 pm : link
A lot of you guys need to drink more wine, or perhaps just enough wine more regularly.


I may have experienced it once, can't really recall, but it was as a kid before I discovered good food and wine.
Nowadays mostly
BlueLou'sBack : 10/19/2019 11:42 pm : link
I sleep like a baby.
Just talking about this. My son gets it AND
oghwga : 10/20/2019 7:08 am : link
Sleepwalks. He's sharing a huge barn loft on my sister's property with us this weekend and last night he was out on the deck alerting us to the people he thought he saw walking around the yard after midnight. He was downstairs, upstairs, and looking at the lights.


+1
BlueLousback
BigBill : 10/20/2019 12:40 pm : link
Your empathy, knowledge, and input on this matter is just...wonderful. Keep eating your delicious food and wine, I’m just happy for you that you are not experiencing this as often as some people. We should all just eat well and drink enough wine, maybe that’s the cure for even more disease processes. Contact the CDC and NIH.

And the other poster about ghosts, just lol. Its nice that you spent so much time researching for absolutely a ridiculous finding. I wonder if you are mocking people that suffer with sleep paralysis. I wonder how you’d feel if someone was rubbing salt on your wound if you were experiencing such a condition. We all will have some kind of health problem to deal with someday. I hope others are just as compassionate to you.