LawrenceTaylor56 : 11/8/2019 8:42 am
Mavs are in town tonight. KP admitted yesterday during an interview he asked to be traded. I know there's some back and forth on this board about he did/didn't want out. KP is soft.

Decent line in box score but not a winning effort.
I had no idea marcus morris had this type of game
nygiants16 : 11/8/2019 11:11 pm : link
mavericks have 2 players, when they are off the court that team is horrible..


His second half last year was awful.. 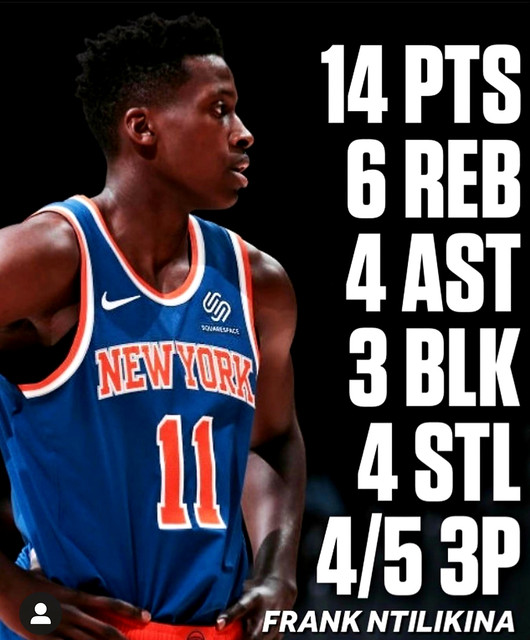 Fun Brooklyn/Portland game.
bceagle05 : 11/9/2019 12:09 am : link
Dame’s got 50 with 6 minutes left. Portland up three.
Frankie Smokes!!
PhilSimms15 : 11/9/2019 12:30 am : link
If this truly is the coming out party for Frank N — then there is light at the end of the tunnel for this franchise. RJ, Robinson, Knox, Frank = average age of 20.25 + five first round picks over the next three years + a healthy amount of cap space. . . .nothing should be more important to Fizdale than the development of these four guys and nothing should be more important to the scouts than watching every minute of the top 5-7 guys in this draft.
Knicks should send a shout to live in Australia.

Of course, if this was just one game and Ntilikina goes back to being tentative and playing with a lack of confidence then the Knicks road is a bit more rocky.

PS—RJ should shoot at least 200 free throws a day. Kid shot .690 at the free throw line in college, just get back there to start with.
If you can get a first for Morris you have to do it
bceagle05 : 11/9/2019 12:52 am : link
but I'm kinda hoping he finds a home here. I'd have no problem giving him a 2-3 year deal this summer. Frank/Morris/Mitch/RJ makes for an excellent defensive unit. Find another scorer in the top 10 of this year's draft and we might have a little something to develop.
When can we see real improvement from Barrett's free throw shooting?
Anakim : 11/9/2019 2:22 am : link
He's clearly going to live at the line in the pros. He NEEDS to be a good free throw shooter.
No reason not to include DJS among the kids.
manh george : 11/9/2019 3:27 am : link
Yeah, he's erratic, but was coming back from a back injury when his stepmother died. He's only 21. I wouldn't mind him at all as a long-term back-up for Frank, assuming Frank is what he seemed to he tonight. Frank could shoot terrifically in the under 18s btw, 54% from the three. He just lost confidence. He is so long for a pg and a great defender for a pg that big.

And, Randle and Portis are 24 and worth something. Getting something out of the 5 first rounders over the next 3 years, and someone of quality for their cap space this year or next, and possibly even a trade for one of their players at trade time, and this could be a team. With the talent two years more mature, lots of cap space, and two first round picks in 2021, and they could fill up the roster. Talent won't be scared about coming here with the youth all two years more mature, and mostly much better.

I still like Knox's potential a lot, although this year he is stuck behind Morris.

Back of the lottery could be a good slot this year.
If this starting 5 continues to play well
nygiants16 : 11/9/2019 3:39 am : link
big if since it was only one game, i am ckmpletely ok playing robinson off thr bench, until he learns not to foul, he can still get 25 minutes a night..

Seriously - he does have some positives - needs to be reeled in and disciplined if he goes off the reservation.

Can't have sloppy mcsloppy bringing the ball up - dribbling east and west beyond the 3 point line. Trying to do "too much" - quite frankly out of control.


lets be fair, he had 21 8 and 4 last night, his defense was not horrible...i get the turnovers are annoying but he played well laat night..

So, you’re going to continue to complain. Lovely. And what exactly is that accomplishing? Other than driving the rest of the board crazy because you keep repeating yourself day after day. We get it. You hate Randle. You’re on record. Why is that not good enough? Why must the rest of us suffer because you like to constantly complain about the same thing over and over again? You really like complaining that much? Ugh, there are some strange birds out there...
Glaring issue needs to be fixed.
GiantsUA : 11/9/2019 7:56 am : link
.
Fizz needs to settle in starting 5
Earl the goat : 11/9/2019 8:09 am : link
I think Randle would be much better coming off bench with Portis

Play Morris and trade him for a first

Wtf? You constantly complaining on BBI is going to get these glaring issues fixed? That’s some deep shit there man. Some random guy on a football fan website that the Knicks (basketball) have no idea even exits is sure to get this all turned around! Keep on complaining my friend! That’ll teach em!
.
arcarsenal : 11/9/2019 8:12 am : link
I've crushed Frank like most people - but that was some performance last night. Wherever the fuck that came from, I want more of it.

Brutal game for RJ - it's going to happen. A lot of really great players struggled at first. He's still such a young kid. Just really hope he can improve on FT's. That almost lost us the game last night.


he just needs to hit free throws, he is so agressive driving to the hoop,if he just hits feee throws he is going to score plenty of points even without a jumper..
.
arcarsenal : 11/9/2019 8:25 am : link
No doubt. I love the way he attacks the rim and generates scoring chances. Even last night, he had a couple of big boy moves to get into the paint and get a high percentage shot off.

I have no real worries at all with RJ. Just needs to keep playing and he'll grow. He's got a great head on his shoulders.

Stephen Jackson was on with Boomer and Gio the other day and he was talking about how RJ is universally loved right now... pretty much everyone likes the kid and thinks he's got a great head on his shoulders and will have a great NBA career.
Love finally seeing Frank put it all together last night.
Mike in NJ : 11/9/2019 9:19 am : link
He looks so much more confident out there, you can tell that finally getting consistent minutes has really helped him.

Just saw a stat that Porzingis and Doncic were combined 5-15 with 5 turnovers and a blocked shot when Ntilikina was defending them. He made several “elite” level defensive plays.

Wow, relax, it's the weekend.

You want to pick a fight look elsewhere.

Fiz should tell Frank that if he passes up an open shot, he’s sitting.
For the first time in years
bceagle05 : 11/9/2019 12:09 pm : link
I actually watched the MSG encore airing of the game. Best win in God knows how long. My man Frank.

I think the Knicks and Porzingis BOTH have some regrets about the breakup - everyone gave up on the relationship too quickly.

Good win
TyreeHelmet : 11/9/2019 12:10 pm : link
I know I’m beating a dead horse and not trying to revisit and litigate the trade again. But how excited would you be with KP on this team?


With his defense, if hes even an average offensive player that can make an open 3 at a half decent clip AND can at least bring up the ball on the floor without turning it over he would be quite valuable.
RE: .
Giantz_comeback : 11/9/2019 12:41 pm : link
In comment 14670029 arcarsenal said:


Paul Peirce-ish not explosive by any stretch but understands spacing and positioning of the body so well to get up shots with a body on him. It's really impressive. If he improves at the line (which he should) and from beyond the arc , he will be a bonafide star.

If Fiz has any clue
Dave on the UWS : 11/9/2019 2:29 pm : link
(Not sure he does), Ntilikina starts EVERY game rest of the year, gets at least 25 minutes, whether his offense is good or not. Now at 21, third year in the league, is when he should start to blossom. Encourage it, help it, he has a potentially elite skill ( his defense). Elite skills lead to wins and a winning team. It’s up to the coaching staff to get that out of him on a consistent basis. Controlling the other teams point guards is a great way to start getting this team straightened out. Set the tone defensively and with Robinson at center, an identity will start to emerge. When it carries over to Knox they would have a real good young player. He’s only 20. Barrett already competes at both ends, his long range shooting (and free throws have to improve. I suspect he knows that.
Ntilikina's highlight reel
Canton : 11/9/2019 6:32 pm : link
.
Link - ( New Window )
Frankie was all over the place.
bceagle05 : 11/9/2019 7:05 pm : link
Too bad Clyde wasn’t on the call for this one - he would’ve loved it.
Interesting nugget from Berman - Mills is a Frank supporter.
bceagle05 : 11/9/2019 10:13 pm : link
Berman - ( New Window )
RE: Interesting nugget from Berman - Mills is a Frank supporter.
steve in ky : 11/9/2019 10:50 pm : link
In comment 14670565 bceagle05 said:


Good, he needed a supporter in the organization since Fizdale never displayed a whole lot of it.
Porzingis sits out the back-to-back tonight
shyster : 11/9/2019 11:02 pm : link
at Memphis.

Result: Mavs put up 138 points with a balanced scoring attack in easy win over the Grizzlies.

Mavs go to Boston Monday night, then get a couple off days before the rematch with Knicks at MSG on Thursday.

From my view this guy looks like the type of professional that the Knicks have lacked for a very long time. He seems like a leader and a culture setter for a team in desperate need of it. That is very very valuable.

This is a young team that needs to learn how to approach practice and games. It’s far better to have RJ Barrett and Knox and Ntilikina seeing how Morris approaches his day to day job then it was when say Porzingis was looking at Carmelo Anthony.

I wouldn’t consider moving Marcus Morris right now.
Long term
31southst : 11/10/2019 11:45 am : link
Morris and Randle are redundant. Morris has shown more and frankly is the better fit as the 4 with Robinson at the 5 (hopefully Knox at the 3 but still a wide open q). I’m fine giving it more time but if 40 games in its more of the same, question is will the front office admit Randle wasn’t a good signing and let him be moved to 6th man.
Randle
steve in ky : 11/10/2019 12:44 pm : link
Has done many things well but unfortunately also many things poorly. I think much of it comes from his trying to do too much, probably in response to signing as the big FA the Knicks did get, and his feeling the need to justify that. If he can learn to play within his limits he can be a nice player it’s when he goes beyond that the wheels begin to fall off. The question is can the coaches get him to do that, or if not will he learn it himself. That will be the key to how well he does as a Knick.
Pages: 1 2 3 4 5 <<Prev | Show All |