It's not easy to dedicate time out of your busy life to reflect and write about the Giants' upcoming game.

I'm not necessarily ready to give up on Gettleman...he has made some tough calls (Beckham, drafting DJ very high, etc). He has shown that he has some balls, I'll give him that.

But...they might need to do the "George Young" thing and get someone outside the "crony" network to fix this. The Mara's need to step back and let someone who knows what they are doing fix this pile of s*it.

The Jets will beat the Giants on Sunday and the shit show will accelerate to a new level.


Mara has said over and over that the worse thing is apathy
mikeinbloomfield : 11/8/2019 1:55 pm : link
This review has it in spades. Will the Giants win? Who cares. What will happen if they lose? Probably nothing, but if its not a complete strip down from the front office on down, again who cares. Half measures like Bettcher losing his job wouldn't change the fact that his side of the ball doesn't have a player that scares the other team.


Clash of the young quarterbacks? Again, who cares? Jones will fumble, get sacked a ton and perhaps throw a pick or two. It won't mean much since the defense won't be able to stop Darnold or Bell if he plays.


I don't mind rebuilding. Every team goes through it. What I do mind is dumb decisions, like trading away draft assets for a player not signed after this year that only make a difficult process harder. Point is, I don't see light at the end of the tunnel. I don't see a unit that has improved last year to this to say the team is building around. We are mired in mediocrity that is likely to continue because I'm not sure the people steering the ship no how to get the team out of it. Again, who cares?
Question everything !
Bluesbreaker : 11/8/2019 1:56 pm : link
Clearly the coaching staff needs to if we end up
2-14 they will have no choice !
Maybe they some how win a few more it just hurts the
draft position .They should have moved Engram and Jenkins
It seems we have put resources into DT's and not
DE's .The poor numbers are staggering !
You wonder how long Mara is content to sit in the owners box
Mike from Ohio : 11/8/2019 1:56 pm : link
and watch fans of other teams come in and take over his stadium and mock his team while he just assumes things are about to get better.

It's a sad state this team has fallen into. Firing Shurmur is a start, but it's past time he realizes the organization is rotting and wholesale changes are needed to out it back on the right track.

I LOL'd
Embarrassment to what they have become
micky : 11/8/2019 2:01 pm : link
Yet AGAIN a season that has finished before Halloween and pitiful games to be played out.

I'm sure there's excuses, as always, by ownership et al, and few on here, but nothing solidifies a loseing org by their putrid record year in and year out nowadays.

They'll never learn
At least Manning isn't getting bashed for it anymore.
Britt in VA : 11/8/2019 2:02 pm : link
.
Looking like JJ and the D
Coach Red Beaulieu : 11/8/2019 2:10 pm : link
are already quiting on PS and making business decisions. I expect that attitude to spread this week. And JJ was making some asking a lot from your CBs tough tackles on the edge earlier in the year.

Even Jones had sense to realize OMG Switzer-Gailey-Campo hell he was in and brought in Parcells.


Switzer won a Super Bowl?! Additionally, do you think Garrett is some great coach? He’s got tremendous coordinators and assistants there and let’s them handle their side of the ball without too much meddling. He looks good.
RE: RE: At least Manning isn't getting bashed for it anymore.
Britt in VA : 11/8/2019 2:59 pm : link
In comment 14669498 Dnew15 said:


Let me simplify the preview for you:

Any questions see the site owner
At least Manning isn't getting bashed for it anymore.
IIT : 11/8/2019 6:46 pm : link
All those assholes were feeling pretty vindicated after Tampa...

Not joking, I almost posted the picture of that stupid owl instead.
I cannot remember, if ever,
section125 : 11/8/2019 6:55 pm : link
that I cared less about a Giants game. I sat through an ice storm to see the Giants play the Bears when Csonka was on the Giants with both teams at 5-10 or 5-11...I sat through a Seahawks game in Parcells 1st year, IIRC, when they were 3-12 or something in December.

I could care less after 56 years...even through the the late 60s and 70s I cared every game, every week.
I know that must have hurt
Fort Mill Mike : 11/8/2019 6:55 pm : link
to write, but it's truth. As far as your game previews go, that was by far one of the best well crafted. Maybe it was the pain of reality that inspired you, but most good writers do their best work when they're in pain. 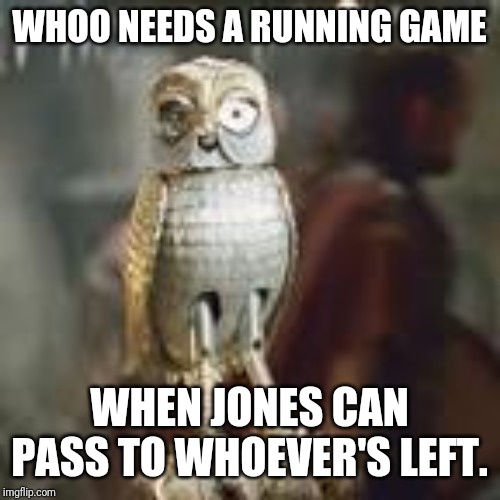 
I agree. The OL is a work in progress and the LBs suck but you can see the core taking shape.

And Eli was veteran enough to throw "innacurate" passes to take the incompletion and a "Sir Collapse Alot" safe short sacks or check downs that would have the jagaloons on bbi enraged at Eli. Panicked Shermur is throwing DJ8 to the wolves shaping him up to be a David Carr turnover machine.
The only real question is which team is worse
trueblueinpw : 11/8/2019 11:45 pm : link
I’m honestly not sure which team sucks more.
RE: RE: At least Manning isn't getting bashed for it anymore.
section125 : 11/9/2019 6:18 am : link
In comment 14669947 Coach Red Beaulieu said:


A bad coach and stubborn to boot what a bad mix !
It takes a very special person to be a head coach in the NFL
NYRiese : 11/9/2019 9:48 am : link
A person with a variety of extraordinary talents and a keen, quick mind.

Someone who doesn't conflate patience with stubbornness and values attention to detail without wallowing in micro-management.

Do the Giants have such a head coach?
Kind of hoping
giants_10_88 : 11/9/2019 5:36 pm : link
we lose this game by 21+ so Shurmur gets fired.
Although I think the Jets will win this game 27-17,
GeofromNJ : 11/9/2019 6:49 pm : link
I don't agree with everything suggested by Eric. Engram is oft-injured, but when healthy he's a force. Is he injury prone? No more than the early Phil Simms. If Engram is traded, it's likely he'll find health and be lights out for his new team. The contract given to Sheperd was excessive, but was his propensity to concuss known at the time? I don't think so. As for Shurmur's inability to design an offense that exploits Barkley's talent, I presume Eric means the Giants need to use SB as a receiver rather than a runner. In college, against superior defenses, SB either got stuffed at the line of scrimmage or failed to break tackles when he passed the line of scrimmage. He doesn't seem to be a running back who can create when the holes are not there.

As for the Giants allowing 30 points and scoring only 17, this stat would be dramatically different if Jones wouldn't turn the ball over.
I'm Getting Too Old For This Shit
Bernie : 11/9/2019 7:59 pm : link
How did this happen? Where did the optimism of youth in the mid 90's disappear to? The glory days of the old Giants Stadium and the promise of better days ahead. Not so much anymore. A once great game has been gutted by PC bullshit and soft, two hand touch schemes and rules. And our once great New York Football Giants have returned to being the laughing stock of the NFL. I'm sad.
Pages: 1 2 <<Prev | Show All |