How can you tell if a coach is good?

BUgiantfan : 11/11/2019 11:28 pm
Serious question. More than just wins and losses because I have heard people say that Parcells' best coaching job was the year Testaverde went down with an injury and they were only 8-8 that year. What do you look at in the first 2-3 seasons for a coach to determine their competence? I have been watching football for over 30 years and I thought I had a decent grasp of how to determine wether or not a coach is doing a good job. These are the things I've typically looked at:

1) Special teams- most teams have lower tier players on their coverage units and it's the preparation and attention to detail from the coaching staff that makes the difference.

2) Do players come to the team and seem to play better than on their previous teams?

3) Rushing defense- I'm starting to see that I may very well be quite wrong about this but I have always thought that a well coached defense, even with average talent, can stop the run. Defending the pass requires a bit of talent in the secondary but stopping the run can be coached...I thought.

4) Well coached teams seem to get better as the year goes on.

I hear so many people complaining about play calling and all but I put that lower on the list. If your players execute, play calling isn't nearly as big of a problem.

I ask this because Shurmur was the guy I wanted them to hire from the get-go. I thought his W-L record in Cleveland was a consequence of poor talent and not poor execution. I concede that I was wrong. What I can't figure out is exactly what is going wrong- this team is so bad in so many areas. Is it talent? Is it a coach that is simply not getting enough out of the players? Could a good coach at least get this team to an 8-8 level?

If every player has a bad game, you have to think it's the coach's fault.


I agree. We all thought this was a 5-6 win team, so why are we surprised we stink? That said, I do think the offensive line- talent wise- should be at least a little better than it was last year. I couldn't figure out how it could be this bad. They all look like they have no idea where the defenders are coming from. None of it made sense until I read that Eric Smith article earlier. There seems to be comedically poor attention to detail.
joke team
Paulie Walnuts : 11/12/2019 12:44 am : link 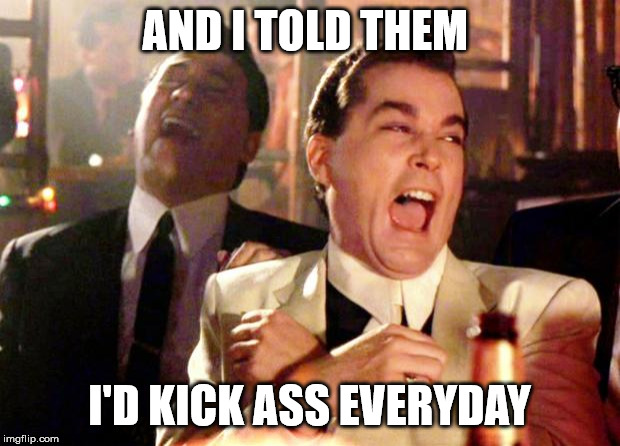 via Imgflip Meme Generator
I think you can always tell
barens : 11/12/2019 7:44 am : link
when you see a team that tackles well on defense consistently.
winning games helps
rocco8112 : 11/12/2019 7:50 am : link
.
Good coaches have :
PatersonPlank : 11/12/2019 7:53 am : link
- Schemes that put their players in positions to make plays, even if they aren't making them
- Teams get better during games because of adjustments
- Teams get better during the season because of coaching
- Teams that are motivated, even if they are losing, you don't see much of this finger pointing, bitching crap with good coaches
- Teams that consistently are competitive above their talent level
- Teams that have a scheme built around the talent, not built around some philosophy whether the players are able to execute it or not (I hate this)
- Teams that are well prepared, even if they lose

So on well coached teams you don't see continued mis-communication on defense, you don't see players always out of position, you don't see a player run out into a position they have never played, etc.
"You are what your record says you are"
WideRight : 11/12/2019 7:59 am : link
There is no single "good way'to coach. That vastly oversimplifies the challenge.
A coach is good
NikkiMac : 11/12/2019 8:11 am : link
If his team is in every game and rarely have back to back losses
Hmmm
Johnny5 : 11/12/2019 8:40 am : link
The best coaches are able to scheme to their players. Put them in a position to succeed by playing to their strengths and as much as possible keeping them away from situations that expose their weaknesses.

That is how you maximize talent. In this regard, there is Bill Belichick, and then everyone else.

The also rans that come to mind (in close to this order)... Pete Carroll. Andy Reid. Sean Payton. Mike Tomlin. I think both Harbaughs are pretty good in this regard, especially Jim.
No need to look any farther
blueblood'11 : 11/12/2019 8:47 am : link
then the head coach of the New York Giants. He is the personification of a bad head coach. He may be a good offensive coordinator, but he is a bad head coach. Talent aside, his in game moves are puzzling, and his adjustments if there are any, don't seem to work. In the end he gets out coached and for two years running it's like the movie ground hog day. Every day is more of the same. I can't fathom how Mara can bring this guy back for another year of this ineptitude.
Don't ask BBI they don't know...
rasbutant : 11/12/2019 8:53 am : link
There was brief reports of Tomlin and John Harbarough being on the hot seat and half of BBI said they were no good why would we want someone that was just fired. Gruden is another. Garrett. I could be wrong but i feel like BBI rejoiced when the Eagles sign Doug Pederson.
rasbutant
blueblood'11 : 11/12/2019 9:00 am : link
So are you saying we are overreacting about Shurmur? To tell you the truth I've always believed in giving the coach a shot before critcizing him. Some of my closest friends are Eagle fans and were beside themselves when they hired Pederson. I thought this is a former back up QB who cut his coaching teeth under Andy Reid, he may be better then people think. Well, he won them a Super Bowl.
A head coach's job
fireitup77 : 11/12/2019 9:10 am : link
Is to manage the team. A good head coach starts by hiring a good staff and allowing them to do thier jobs. PS first mistake was to hire a OC but not giving him the full responsibilties. PS is not smart enough to be calling the plays and to manage in game decision like when to call timeouts, going for it in 4th down, etc.

I would take Tomlin or either of Harbaughs and do back flips as they signed the contract. Gruden, I didn't think much of but you have to give him credit for what he is doing with Mayock in Oakland.