As usual, you forget the true timeline...

We sign OBJ to the new contract not only because at that time, the team wanted to keep him but also you will get more for him if you try to trade him with a contract that has a few years remaining. Surprised you dont know that.. or not surprised you are ignoring that.

Next, after we signed him, OBJ makes statements about wanting to play elsewhere. It is at THIS POINT where I believe Mara got pissed off after giving the guy a gigantic contract.

I wonder what people like you would have said if we traded him for a box of donuts because he was not under contract. Imagine the melt down here...
Perry Fewell gets another job
ghost718 : 12/8/2019 1:21 pm : link
Odell asks to be traded again


It looks alright, would have looked far better if he was traded prior to giving him a big extension and eating dead money and likely would have fetched a bigger compensation package.

The trade was basically Ximines and Lawrence for Beckham. Peppers is a worthless player on defense.


He was wrong in signing him. That's my point. He had several months to trade him before he signed him.

Giving Gettleman credit now like this is some victory for him is ridiculous.
there was nothing wrong with initially signing beckham
Torrag : 12/8/2019 1:30 pm : link
The organization and shurmur talked to him. It seemed like he understood they needed greater maturity from him and he agreed. Then within months of the deal he was doing that disastrous interview followed by more of the same crap. Fool me once shame on you...you don't want to divorce talent like his without trying to find common ground. Now that would be stupid.

So they unloaded him. As they should have.

Some people have become unhinged when it comes to criticizing DG. There are legitimate issues and concerns to be discussed. But morons making posts about the mans intelligence are just that...morons.
This report is even worse on Odell's part.
Diver_Down : 12/8/2019 1:33 pm : link
It isn't just that he is coming out now wanting to be traded. It is the campaign of subterfuge undermining the team/organization during the season that he has been approaching opposing coaches before games asking them to come get him. All the while, OBJ is giving interviews that he loves his teammates and loves where he is at. Dorsey really should suspend OBJ for conduct detrimental to the team and pursue voiding remaining guarantees on his contract. If another coach approached a player asking what it would take to get that player, it is tampering. But OBJ can do it? Bullshit.
RE: RE: Where’s the tweet?
GiantsRage2007 : 12/8/2019 1:34 pm : link
In comment 14707268 Diver_Down said:

What a nightmare he is.

How many times can you play the victim card.


He signed him on the advice of his head coach with the understanding that OBJ was ready to get in line. Clearly OBJ was a high quality player at the time and a priority. I'd bet 95% felt signing OBJ was the right thing to do and I remember several people politicking for his early extension long before he was signed.
RE: RE: It appears Gettleman
Jay on the Island : 12/8/2019 1:38 pm : link
In comment 14707278 Go Terps said:


The most interesting part of that link is how Mike McCarthy has been preparing to re-enter the NFL as a HC candidate.
A certain degree of shadenfreude is warranted
Overseer : 12/8/2019 2:22 pm : link
but it is summarily extinguished when one recalls just how pathetic & embarrassing the NYG are as a franchise, Beckham or no Beckham.

If the Giants had even the Browns middling 5-7 record, they (the Giants) would be playing a very meaningful game on Monday.
Hall of Fame talent
Tim in Eternal Blue : 12/8/2019 2:32 pm : link
That absolutely tanked his own career.


It’s bizarre. Beckham was signed and then it went sour. Shit fucking happens. Get got out of it at the right team when the roster was bad anyway.

These threads are easy to predict. Same 2 or 3 people say the same things in all of them. You’d think you’d get tired of posting about it after a while but I guess not.
So immature and injury prone
giantsFC : 12/8/2019 2:38 pm : link
Deserves this after having the keys to the castle in NY and helping bring down a great organization


Hey man, I’m. It the one getting all butt hurt about a football team. Shit happens and we stink, I’ll live.


This isn't about me being right about Beckham. I could give a shit. I can't stand the thought that Gettleman somehow deserves credit. He doesn't.
GT
Giant John : 12/8/2019 2:56 pm : link
Your comment is rediculous.
Quite likely narcissist OBJ
Coach Red Beaulieu : 12/8/2019 3:00 pm : link
manipulated and played chickenhead Shumur like a drum to get his contract. "Hey Dave, he's really cool and listens and likes me, I think I can work with him".
GT
UConn4523 : 12/8/2019 3:00 pm : link
and that’s you being disingenuous. We are at the point now where we can go 11-5 next year and you’d still call everything he does awful. It’s just weird.
''helping bring down a great organization''?
Overseer : 12/8/2019 3:01 pm : link
We are watching the same Giants we've been watching since 2013. Virtually the same problems: disastrous Oline play, head-scratching HC calls, shitty drafting, no 2 way Tight End, awful FA supplementation, utterly owned by the Eagles (and now the Cowboys, too), etc etc.

Basically the only (ephemeral) interruption to that highly unenviable streak was...Odell Beckham.

Now I was, by the way, fervently in the camp of "get rid of this headcase" but the NYG's issues since SB46 run so, SO much deeper than 1 Wide Re-diva. A position, by the way, which can't come close to compensating for a team otherwise in shambles. Put choir boy Larry Fitz on the Giants since 2013 (who I call the Tim Duncan of the NFL) and the team's fortune is no different.


No, we aren't. If they go 11-5 next year with Gettleman running the show I'll be here saying I'm wrong.

But last I checked we're 2-10 with a shit roster and a completely broken organization. So any criticism Gettleman gets is earned.
...
christian : 12/8/2019 3:16 pm : link
If a Gettleman managed Giants team wins 11 games next year, I'll wax his car.

Gettleman needs to prove he is capable of accomplishing anything more than getting a younger roster first. That's the only thing he's accomplished so far.

There have been fewer than 10 total 8,9,10 game turn arounds in the history of the NFL.
Meanwhile...
EricJ : 12/8/2019 3:22 pm : link
Odell today with 2 receptions for 38 yards so far. He also bobbled a ball before going out of bounds which would have added significantly to his total. There is still time remaining but it looks like another day with average (or below) production for an NFL WR.

By the way, regardless as to whether Odell tweets that he wants to be traded... I guarantee the Browns would have been shopping him this off season.

I posted at the time of the trade that Beckham would demand a trade
GeofromNJ : 12/8/2019 4:48 pm : link
in his first year, despite his claim of wanting to play opposite Landry. The issue is the city of Cleveland. OBJ would much prefer FL, CA, or NY. He has no interest in middle America. I doubt that he would be happy in Dallas. It's either warm weather or the glitter of the city for Odell.
LOL
ZogZerg : 12/8/2019 4:51 pm : link
"Come get me"...

He is such a clown! 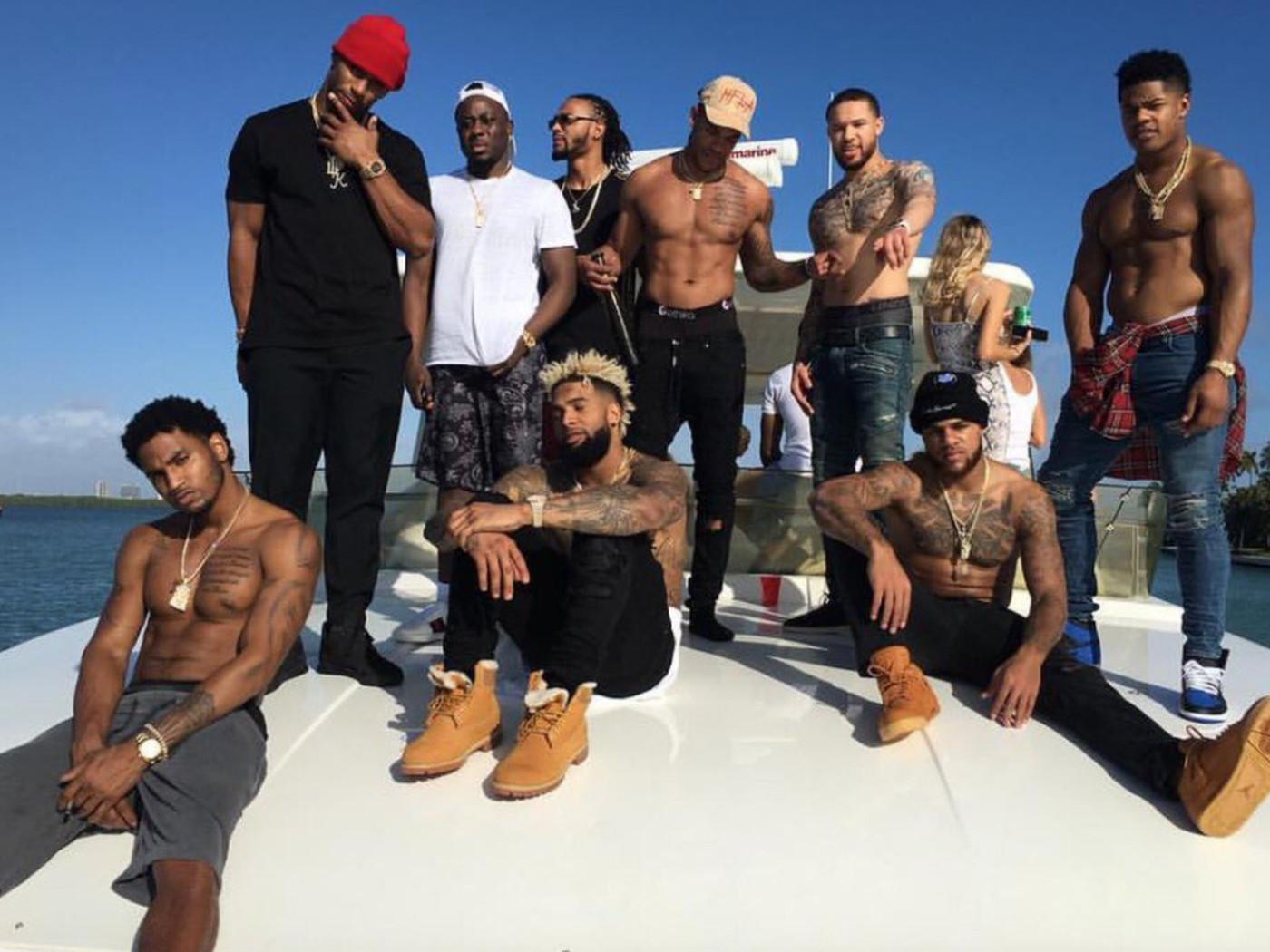 
The Giants as an organization need to find that yacht and burn it.
OBJ was/is a great talent. Fun to watch. But he's always
NBGblue : 12/8/2019 6:20 pm : link
going to be the guy you just don't want on your team. Whether it's injuries or him promoting his "brand", there's always going to something that's just not right for a winning football.
My prediction...
EricJ : 12/8/2019 6:28 pm : link
Early retirement and no hall of fame.
The Raiders will trade for him.
Affirmation : 12/8/2019 6:45 pm : link
It's clear Odell Beckham Jr. didn't want to be traded to the Browns especially when the team still isn't competing which of course damages his brand further. Seeing him stand apart from his own teammates while they were going through a play in the huddle really does say a lot about the situation the player finds himself in.

So who could possibly trade for him? Well the Browns are probably going to want to recoup their first round pick they used to trade for the player and I can see the Raiders making this deal happen considering they already have two first round picks. Not to mention the player has also pretty much made his desire to play on the West Coast well known and what better way is their to sell tickets in Las Vegas than bringing one of the most high profile players in the league to the team.
RE: RE: .
markky : 12/8/2019 7:16 pm : link
In comment 14707591 FStubbs said:

Odell was just listening to a Tom Coughlin podcast that week