Laugh at Odell sure, but Mara should be fuming

The Odell trade for both sides has been an utter disaster. How many wins has Jabril peppers netted this team? Dexter Lawrence after a quick start has completely become invisible for 8 straight weeks.

How many jerseys and tickets do you guys think Odell puts into the stands? Peppers ? Lawrence?

Need to be fired. Trading Odell has cost this franchise and fan base a generation worth of new fans, legacy, revenue, and wins.


Ah... this is really all about your Boomer vendetta...every post same agenda we get it already
Don't agree with your posts
Lines of Scrimmage : 12/8/2019 7:50 pm : link
but it keeps things balanced out on the site. Please continue your thoughts.
was not a fan of the trade after signing him to a big deal
larryflower37 : 12/8/2019 7:51 pm : link
which killed the cap but he has done nothing this year besides be a huge distraction
Now he is forcing himself out of Cleveland.
Today he didn't even huddle up with the offense.


Wasn't Odell here in 2017 and 2018?
I liked Odell, but he has been a massive disappointment this year
Zeke's Alibi : 12/8/2019 7:53 pm : link
as far on his on field performance is concerned. He used to make circus grabs routinely but often wouldn't make the routine play. As his circus grabs have diminished, his drops are becoming more noticeable. I watched a game this year where ESPN was going apeshit but if you watched the game you'd conclude he played a poor game. 3 third down plays missed.
You're kidding right?
FStubbs : 12/8/2019 7:53 pm : link
I'm extremely critical of Gettleman, but I don't know how anyone can see what Beckham has become and could possibly say the trade was a bad move.


I mean, we have 2 wins. I've sure paid attention to that.
How has anything transpired that makes anyone think it was a mistake?
Matt M. : 12/8/2019 7:54 pm : link
Mara is most definitely not fuming. The trade may not have worked out for the Giants, but it wouldn't have been any better with him.

Up until last year, I was a huge fan of OBJ. I didn't love all his antics, but wrote most of them off as just him being a bit off. But, the last year or two he went overboard. At the same time he went from being the most dynamic offensive player I've ever seen to a second tier WR.

They unloaded his contract, and got two picks back in return.

The guy is a see you next Tuesday.
Look I’m the first to admit;
The_Boss : 12/8/2019 8:01 pm : link
I LOATHE everything about Dave Gettleman and believe he needs to be shit canned at season’s end. AND I hammered him here for what I thought was getting railroaded in the Odell trade. That being said, after what we know about the year he’s had in Cleveland and the news that he’s asked to be traded, I am 100% in DG’s corner for trading Beckham. This is likely the first and only time I might be able to post anything positive regarding DG, so don’t get used to it.
RE: Look I’m the first to admit;
The_Boss : 12/8/2019 8:03 pm : link
In comment 14707816 The_Boss said:

Just excruciatingly awful football opinions thrown around like shit in a monkey cage.
I would trade Odell straight up for big Dex
Scuzzlebutt : 12/8/2019 8:51 pm : link
in an instant. There is no debate here. Whatever you think of DG he absolutely fleeced the Browns on that trade.
The real issue to fret about vis a vis the Giants
gidiefor : Mod : 12/8/2019 8:53 pm : link
is whether or not it was a good move to sign him to a long term contract.

The trade was done just at the right moment, and thank god for that - the value of the signing itself is what the issue is.

I can see that signing in two different lights -

one is that by signing Odell, the Giants created enough value to get essentially two number 1 picks+, Peppers and #17 and Cleveland's 3


Right... because the place would be packed if OBJ was on the team despite having just 3 wins.

I hope you are not working in the education system.
I am of the minset
WalterSobchak : 12/8/2019 9:26 pm : link
that you just dont pay a wr $20 mill , its just too much for that position to field a long term winning team imo. I hate what DG has done with this team and want him gone yesterday , but it was a solid trade on his part.
Why would we fans give a shit about the team's revenue?
BestFeature : 12/8/2019 10:58 pm : link
They're in no danger of relocating. What nonsense.
The team's handling of the Beckham situation was a disaster
jcn56 : 12/8/2019 11:16 pm : link
Even if you think they're better off without him, there's no way that you can spin it that signing him to that huge deal then dealing him made any sense.

What they got in return was a huge chunk of dead cap, the 17th overall pick used for an interior defensive lineman who doesn't rush the passer, a third round pick that was squandered and a safety who to this point in his career has had one good season.

Could they have had more trading him in the conference? Probably - but apparently the Giants were more interested in sending him to football Siberia.
RE: The team's handling of the Beckham situation was a disaster
Go Terps : 12/8/2019 11:26 pm : link
In comment 14707977 jcn56 said:


We disagreed on Beckham the person and player, but you're absolutely right here. I'd bet money the Giants didn't take the best trade offer because they were at minimum going to send him to the AFC, and preferably to Cleveland or Buffalo.

Just a complete joke.
You're right there - I was wrong, I wanted to keep Odell
jcn56 : 12/8/2019 11:32 pm : link
I still believe with the right management they might have been able to keep him in check, but on his health alone you can't justify that contract, even if he wasn't being a headcase.

You're quite literally the only one on BBI that nobody can argue with on anything Beckham related, because you nailed that one from start to finish.

Why on Earth
Joey in VA : 12/9/2019 12:10 am : link
Would anyone even respond to this halfwit? He or She has proven repeatedly to be a clueless fuckstick, why are you arguing with a moron? Granted, I do it constantly here but this..thing is an utter disgrace. Odell sucks balls, Eli made him better and his injuries have robbed him of what he was for 2.5 years. If huygens wants to jerk his tiny dick to his #13 jersey, let him, but he's dead wrong 100% of the time.
RE: RE: The team's handling of the Beckham situation was a disaster
santacruzom : 12/9/2019 12:45 am : link
In comment 14707989 Go Terps said:


Not clear what your point was then about paying attention. My point was I am paying attention and I see us winning less games. And being less competitive in them - which is the worst part.
Whew
blueblood'11 : 12/9/2019 6:58 am : link
OBJ is proving to be an entitled, in his own mind, pain in the ass. The only criticism I have of the Giants is not that they traded him but signing him to that huge extension, then watching our Gettleman laugh as he said well, we didn't sign him juist to trade him. And the beat goes on in the land of the Giants.
the shame was that we even
mdc1 : 12/9/2019 8:07 am : link
signed him to that f'ing contract. Anybody with a brain needs to rewind the tape on that Panthers game. A sign of an individual that has serious mental issues,
RE: Oldie but goodie
mfsd : 12/9/2019 8:18 am : link
In comment 14707778 map7711 said:

The Giants did the right thing, record be damned. Although, I'd argue it would be worse with OBJ than without him.

Unfortunately he needs to be on a team with veteran leadership. He would thrive in New England.

The Giants and Browns are not good fits for his personality.

If the Giants had retained him, he would likely be forcing a trade as he is in Cleveland. In that case the Giants would not have gotten fair value, or anything remotely close to what they got from the Browns.

1)Giants traded Odell Beckham Jr. because they were hoping to win more games without him then they would with him (hasn't happened)

I think all of those are probably absolutely true. If the Giants aren't winning more games without Beckham Jr. then they are probably losing money. As an owner of a team you would probably prefer Beckham and more tickets bought and more money spent vs Peppers and Lawrence if the records are going to be both poor
bwaahahahahah
GMAN4LIFE : 12/9/2019 11:52 am : link 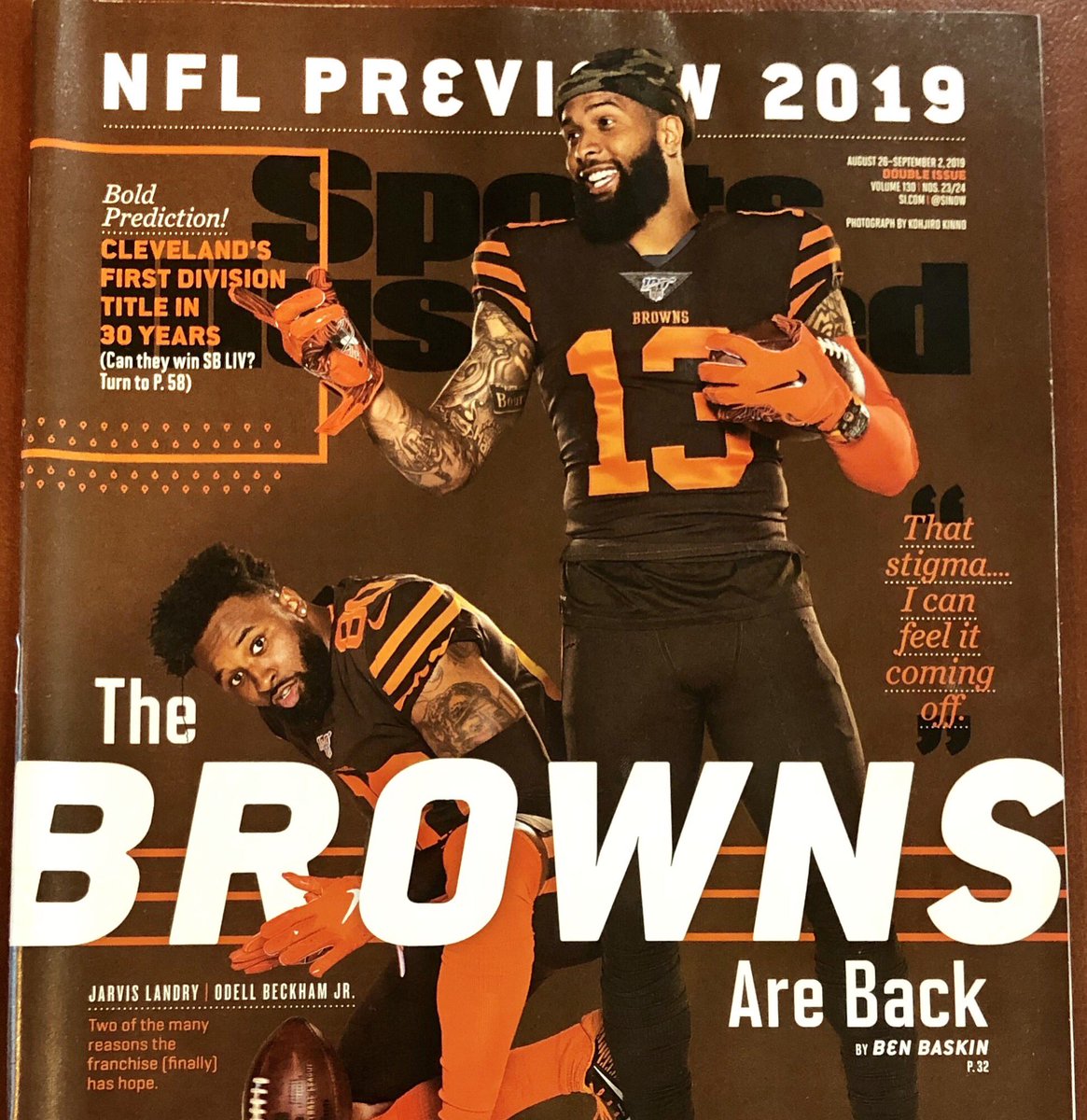 
I would love to hear what you think we should have received in return. Remember... his injury prone status was already out there and he also hurt his own trade value with the constant antics.
RE: Must have hit a nerve
Thegratefulhead : 12/9/2019 12:26 pm : link
In comment 14707771 huygens20 said:
I think you are a good poster. You know enough about BBI to know what the response would be though.

IMO trading OBJ is the best thing DG has done. No personal attacks. I could not disagree with your OP more. I don't want players that put themselves above the team. I think OBJ actions both on the field and off, his interviews and tweets are definitive evidence of him putting himself above the team. Both here and in Cleveland. Failure to concede this is will ignorance IMHO.
RE: I'm
Gettledogman : 12/9/2019 2:52 pm : link
In comment 14707769 Eric from BBI said:


While all DGs moves haven't been Aplus -this one is and so is sticking to his evaluation and drafting Dan Jones at QB. We all know he want to draft the LBr and passing on him was a tough call but you cant say that was a mistake and neither was the pick after.
If Peppers had a better, more consistent season this would be a
SGMen : 12/9/2019 2:59 pm : link
great trade for the Giants. Lets hope with a new coaching staff he returns to health and is in form all 16 games next year.

Odell had to go as he was a distraction. I have no problem with trading him away.
Meanwhile, he’s hurt again and has already worn out his....
Crispino : 12/9/2019 5:02 pm : link
welcome in Cleveland. Doesn’t get along with his QB (read doesn’t think he gets enough targets) and has said he’d prefer to move on from Cleveland after the season. (Per reports today.)