If it's Garrett, why the delay?

The team has done a great job of plugging leaks.

I wasn’t sure Judge was sold on either Shula or Garrett and was wondering if we would be hearing more interviews coming in. No one said what Linehan is being interviewed for so I wonder if it is for OC....heaven help us if it is.

Lastly, some wonder if he is waiting to interview someone from these final 4 teams. I am skeptical on this unless Judge has Andy Reid’s word the Chiefs will permit Bieniemy to leave even though It is a lateral move.
RE: If I’m JG I’m deciding if I want to be a HC again
bw in dc : 1/17/2020 12:50 pm : link
In comment 14783474 ron mexico said:


He's going to be at the top of most lists next year.


I can’t imagine any team panting after JG to be their HC...possibly some small college team.

Think about it....the man was HC for 10 years and what has he accomplished as HC? Two lousy first round playoff wins. And look at the teams he has coached! Very talented players. No, JG will go down as an UNDERACHIEVING HC, plain and simple. Any team that wants him with that resume is pretty lame. Don’t get me wrong, I’m sure he is a better OC and That he is a great guy to be around.....but the resume speaks for itself.
RE: If I’m JG I’m deciding if I want to be a HC again
Metnut : 1/17/2020 12:55 pm : link
In comment 14783474 ron mexico said:


mike lafleur
In your fervent desires, no one is recognizing
HomerJones45 : 1/17/2020 1:20 pm : link
the issues aligned against such a marriage:

- does Garrett, a HC for the last 9 years, want to wet nurse a rookie HC?

- the finances? Does JG want to work for what he is being offered?

- does Judge want an experienced HC hanging around and serving as another power center and HC in waiting if he fails, especially if as OC, Garrett gets input in hiring the AC's on the offensive side of the ball?

- was Garrett a Judge idea or a FO idea? If a FO idea, that would just reinforce the point above.

- has Garrett given up any aspirations of being a HC? If not, why bother having him for one year, two at the most before he gets a HC gig?

- does Garrett want to tie his reputation to a rookie HC on a rebuilding team? If Jones has a sophomore slump or the offense has a bad year, does he want the blame to hurt his chances of getting a HC gig?

I think there are enough questions and negatives that this is not going to happen which is reason enough to keep interviewing.


Heard more than 1x in recent days the suggestion that if he spent a year off studying the league and presenting his findings in 2020-2021 offseason interviews, it would improve his chances down the line of becoming a head coach again as opposed to taking a job now.
RE: Again
Mdgiantsfan : 1/17/2020 1:23 pm : link
In comment 14783473 Eric from BBI said:


Maybe he could build a barn where he could binge eat and watch cartoons all day. Seemed to work for this guy: 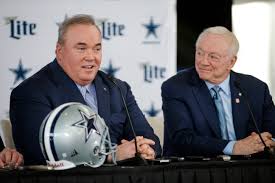 
The ties to Judge are a little more attenuated than with Garrett. While Garrett and Judge both worked under Nick Saban at different points, LaFleur worked on Dan Quinn's staff and Dan Quinn once coached for Nick Saban. Not to mention, LaFleur's ties are more with Kyle Shanahan than with Dan Quinn. They worked together in Cleveland and Shanahan brought him to Atlanta when he worked for Quinn.
RE: Mdgiantsfan
Mdgiantsfan : 1/17/2020 1:33 pm : link
In comment 14783552 Eric from BBI said:


Gotcha 👍🏾
All of..
FatMan in Charlotte : 1/17/2020 1:52 pm : link
the rumored coaches are probably reluctant to work with Mara and Gettleman, so they need to come in and have face-to-face interviews with ownership and the front office to confirm their suspicions.

Jints Central will be breaking new ground this year. Judge will serve all coaching roles because he can't find any other professionals to work with anyone else!!
RE: All of..
Klaatu : 1/17/2020 1:56 pm : link
In comment 14783604 FatMan in Charlotte said:


They need to run a background check on all of the candidates. Right now they're all at Prints Central.
why would Garrett interview here
Dr. D : 1/17/2020 2:00 pm : link
if he wasn't interested in being the OC? I guess a front office position is possible, but the most obvious answer is OC.

Plenty of unemployed former HCs have gone back to coordinating.

I guess it's also possible JG was on the fence about taking a year off vs. being Giants OC and only time will tell..

the suspense is killing me!


Lol what? How have they done job plugging leaks if all the coaching information we have has come from reporters and not the team?
Mike in Long Beach
Eric from BBI : Admin : 1/17/2020 2:16 pm : link
Because we've only heard about four of the vacancies. That's completely different than the past.
Has Garrett
Thegratefulhead : 1/17/2020 2:17 pm : link
Interviewed anywhere else since he was here? That would be telling.
If you say so 🤷
Mike in Long Beach : 1/17/2020 2:18 pm : link


Or the new spin that Jason Garrett is too good to be the Giants OC since he will just leave next year anyway.

Gotta love how bw's mind works, if the Giants don't get Garrett he would find a way to blame DG or say this is the type of hire that was forced on Judge. Now that appears likely we might get Garrett, he has created a new narrative to use all year that the hiring of Garrett will be a mistake because he will be gone next year and DJ will have to learn a whole new offense.


Not only that, there is little upside and lots of downside to taking an OC job for the purpose of improving his HC chances. Teams aren’t hiring JG because he is an offense whiz kid, they are hiring him for his exec presence. Even if the Giants start scoring like the chiefs, it will only improve his standing slightly. Then there is the chance we are in the playoffs and he misses the hiring window.

Worst case scenario the O regresses and he get the blame and is no longer a candidate.

Difference between Garrett sitting out and any other fired HCs is that
Ivan15 : 1/17/2020 2:52 pm : link
Garrett isn’t getting paid to sit. He may feel more obliged to work.

Sitting out the year won’t raise his stock or improve his chances. He is who he is personality-wise. He’s not changing per se. What you’ve seen is what you’ll get. If that’s desirable, he will receive a HC offer(s).
RE: Difference between Garrett sitting out and any other fired HCs is that
Reale01 : 1/17/2020 3:10 pm : link
In comment 14783719 Ivan15 said:


Good point. Lots of guys who sit are getting paid.

Also, the young QB coach (or someone else we hire) will likely be told that they will be an OC in training knowing that Garrett will likely leave in a year or two.

Really makes sense for Garrett. The Giants have some talent on offense. A good chance to look good and make a splash.
.
Bill2 : 1/17/2020 3:11 pm : link
If we are in speculation land its also possible that his wife ( graduate of Harvard Law School) doesn't want to move around from city to city every year or two years. Many people who have choices don't. We don't know

She could be interviewing here in NYC and or trying to see if there is a house they can settle in. We don't know.

Its also possible that there are trailing attorney to attorney issues with some non compete and confidentiality clauses on his contract from Dallas. We don't know. We don't really think Jerry Jones would give up a chance to be the center of attention if meddling was possible/

Could be he and the Giants have some clauses they need the NFL office to review and approve. We don't know

Could be in the total team no one bigger than the next culture JJ wants that they want to announce all of them at once. We don't know

What's different from the Reese/Ross years is that the leaks from the Giants during FA and pre draft seem to have gone down and if that gains us advantage here and there...good.


This is kinda my point. Siting out keeps him where he is. Taking a job as an OC is more likely to decrease his value than increase it IMV.


I agree, this OC selection has me in a tizzy....but what happened to BIG FRIDAY? The Giants could have helped us all sleep easier this weekend by announcing the coaches today......but it appears they are not interested in easing our pain or calming our fears.
5BowlsSoon
Eric from BBI : Admin : 1/17/2020 4:15 pm : link
Easing your fears?

I'm of the opinion that those rosters were good but often overrated. The popular opinion of any given player tends to balloon as as soon as they put a star on their helmet.
Where is the evidence
latichever : 1/17/2020 7:05 pm : link
that Garrett is some kind of offense genius?