My favorite player all time..will miss watching him on Sundays.


And yet a lot of people do/did. Its infuriating.
My favorite athlete of all time..
Sean : 1/22/2020 9:06 pm : link
There’s been a lot of talk about holding onto Eli for too long, but you know what? I’m really glad he’s not taking a snap in any other uniform. An all time great Giant - I’ll miss watching him play.

Thank you Eli.
Eli - the best of the best
yalebowl : 1/22/2020 9:19 pm : link
Eli Manning
Charlie Conerly
Y A Tittle
Phil Simms
Kerry Collins
Jeff Hostetler
He’s the only QB my 19 year olds have ever known
Steve L : 1/22/2020 9:21 pm : link
Eli helped create some great memories with my kids. Not just the Super Bowls, but sharing snacks and cheering for the Giants while drinking beer together (root beer for them) for all the regular season games too.

It's absurd on so many levels
Greatest Giant ever
Matt G : 1/22/2020 9:48 pm : link
Not even close in my book
Great Strahan tweet:
Dave in Hoboken : 1/22/2020 9:48 pm : link
Michael Strahan
@michaelstrahan
·
8m
Congratulations on an incredible career. Always a great teammate and friend. Enjoy all the praise because you’ve earned it my friend. Now we can Golf! #ThankYouEli 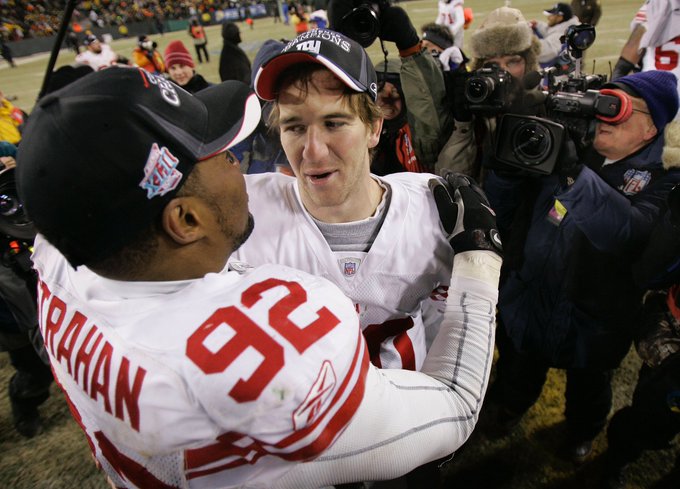 Link - ( New Window )
Maybe Eli Can Be
Percy : 1/22/2020 9:55 pm : link
Equalled in the hearts of true Blue fans, but surely he can never exceeded. Thanks, Eli, for all the great, great years of Giants football we had with you at the helm, and the two Lombardi trophies, too!

Still have no idea how that Tyree play even happened...

I can't wait to see what he does next. If anything

/Eli Manning and all his Millions.

Manning and Collins are the only QB's I can vividly remember.
All I can say is
NBGblue : 1/22/2020 11:28 pm : link
thank u Eli. I routed for a lot of NYG players, but never as hard as I routed for U. And, although u sometimes left me scratching me head, u were always my guy. My God, we'll miss you and never forget u.
Thank you for everything, Eli
KingBlue : 1/22/2020 11:34 pm : link
You will always be my favorite Giant for your play, your class, your toughness, your humility, your generosity.

Thank you for being the champion you are, on and off the field.

You are cherished in my household and you always will be.

Glad to see he's hanging them up - really would rather not find out whether another go at it next year would have worked out any better.
ELI - a GIANT GOAT
gmangill : 1/23/2020 6:11 am : link
Thanks for some of the greatest memories I have as a lifelong Giant fan.

Thanks for being the best role model you could possibly be.

Thanks for being the QB1 that got my then 7yo daughter into the Giants and football in general... A connection between her and I that is precious to me.

Thank you for just being you...

My favorite Giant of all time by a wide margin..

I wish you and your family continued success and health in your retirement.

Geez, now I am married, have kids, a house! I just hope that one day my boys get to experience the Giants going on runs like 07 and 11.

Eli will be missed, a true NY Sports icon. Kind of ironic that the day after Jeter gets announced into the MLB HOF, Eli announces his retirement. Those two were always mentioned in the same breath on how they handled the NY market and did everything the right way.
RE: Wish McAdoodoo hadn't sat him
figgy2989 : 1/23/2020 7:11 am : link
In comment 14790405 Bruin said:


I have thought about this and I think that was the one thing McAdoo did right. Of course Ben is vilified now for that decision, but it made the transition easier to turn to Jones. There was never the "streak" hanging over the franchise and I believe had McAdoo not did what he did, it certainly would have been a bigger story line. Who knows, they might have stayed with Eli longer this year to "preserve" the streak before handing the keys to DJ.


We're all happy for you pal.
Thank you Eli. Classy, humble, tough as nails.
Crispino : 1/23/2020 8:48 am : link
I can’t think of any professional athlete who accomplished the level of success that you reached and was less appreciated. Yet you stood tall while the critics had their say, and always handled yourself with class.

Top 10 all time in passing yards and touchdowns, two Super Bowl wins, two time Super Bowl MVP.Never missed a game to injury. That’s a career of accomplishment that every franchise in the league would take from their franchise quarterback.

Finally, thank you for giving me two of the three greatest nights in my life as a Giants fan. You will be greatly missed.
Eli was Money
Gettledogman : 1/23/2020 8:53 am : link
Game on the Line give him the ball. Had the best comeback stats -better than all QBs. No one wanted him to have a chance at the end of the game. You played w toughness grace and class throughout even with the many knuckleheads they put around you. No other QB would have put up with what you did the way you did. A true professional. Thank you!
Thank you Eli!
Jim in Forest Hills : 1/23/2020 8:58 am : link
I don't need to ever buy another jersey again, I will be rocking your #10 for the rest of my fandom. You did it right!
...
ryanmkeane : 1/23/2020 9:16 am : link
Eli is the rare type of athlete that you won't even look back and say "wow, 2 time champ, great player, etc.." you will just say..."Eli"....he embodied the New York Giants and all the organization stands for. He is to me, without question, the most important athlete of my lifetime in terms of what he gave to me, being a lifelong fan of this team. Not just the moments and the 2 super bowls, but literally every single week, for 16 seasons, there was just talk about Eli and how great he was last week, or how he had a shit game but he was gonna bounce back and come out firing, or how he brought us back in the 4th when we were dead and buried. It was just so god damn entertaining, win or lose. And watching him march out there every single game was just such a ridiculous privilege for all of us that we probably won't ever see again. Never, in 16 years, did he single out a teammate, talk bad about coaches, players, fans, a situation that happened. Nothing. It was all on him. If we lost it was "I gotta play better" if we won, first thing he would do is credit the coaches and players and fans. I've really never seen anything like it.

I think when the benching thing happened with McAdoo, it was a gut punch to all the fans who had lived and died with Eli for 14 years. I thought about that benching for an entire week and it honestly like...effected me. Not to get too crazy or anything but it really did hurt. Wife and I went to his last start against the Dolphins, and we didn't stay until the end because it was damn cold and my buddy wanted to leave. Driving back all I could think about was missing that send off. And watching this press conference Friday is going to be bittersweet in every sense of the word. I'm sure all of us will be holding back tears, watching this guy call it a day.

Thank you Eli for the great memories!
Thank You, Eli.
HMunster : 1/23/2020 10:19 am : link
I've always been a fan of more of the defensive side of the game, growing up with LT and the rest of the crew. But the one offensive player that I was a huge fan of through nearly 40 years of Giants football, is Eli.

To me, he embodies the Giants spirit. Tough, gritty, determined, loyal, team above all else, and a never say die attitude. He's a man of character and has always conducted himself both on and off the field in a way that every Giants fan can be proud of. A true class act and the penultimate Giant. Thank you, Eli, for all you gave to the game, to the Giants, and to the fans. I wish you many years of good health and happiness with your loved ones. Enjoy your retirement. You've earned it!
Thank you for everything Eli.
Brandon Walsh : 1/23/2020 10:21 am : link
Seriously- thank you.
Strahan said this morning on GMA
Dave in Hoboken : 1/23/2020 11:40 am : link
that he will be at the Eli press conference tomorrow. Here's a clip of him talking about Eli, being his teammate, and that he will be at the Eli press conference tomorrow:
Link - ( New Window )
RE: Jesus,
Rick5 : 1/23/2020 12:29 pm : link
In comment 14790042 Ryan in Albany said: