Someone tweeted this to him. His response was

Just look at his tweets, he’s gone on and on for days how he isn’t a HOFer. Really embarrassing.
Pages: 1 2 <<Prev | Show All |
Why does ESPN hire people you have to look up?
moespree : 1/24/2020 1:19 pm : link
They never used to. They used to have well known former players on their programming, but in the last 12-18 months it's a bunch of nobodies that you have to be reminded who they were and when they played.
Besides isn't longevity a big part of it
PatersonPlank : 1/24/2020 1:20 pm : link
Playing through injury and being available to the team?

If not then everyone who has one good season she be in the HOF.

The reason McNabb didn't win any Super Bowls is McNabb. The bigger the game the worse he played. Go back and watch the 2008 NFC Championship game. I dare you to find worse QB play in a big game than McNabb in the first half of that game.

Contrast that with Eli in the two championship games he played in.

Super Bowls? Eli two time MVP. McNabb literally threw up all over himself.

McNabb's teammates chose sides between him and Owens. We saw today what Eli's teammates thought of him.

Eli won the NFL man of the year award and the Starr award. The only thing McNabb has done off the field is get arrested multiple times and get thrown off TV.


Race baiting at its finest. Must be watching too much Nick Cannon.
Jones used to be a local guy here in Raleigh
Jints in Carolina : 1/24/2020 1:32 pm : link
for the newspaper...and he in local sports radio from time to time....he thinks he's the smartest man in the room. 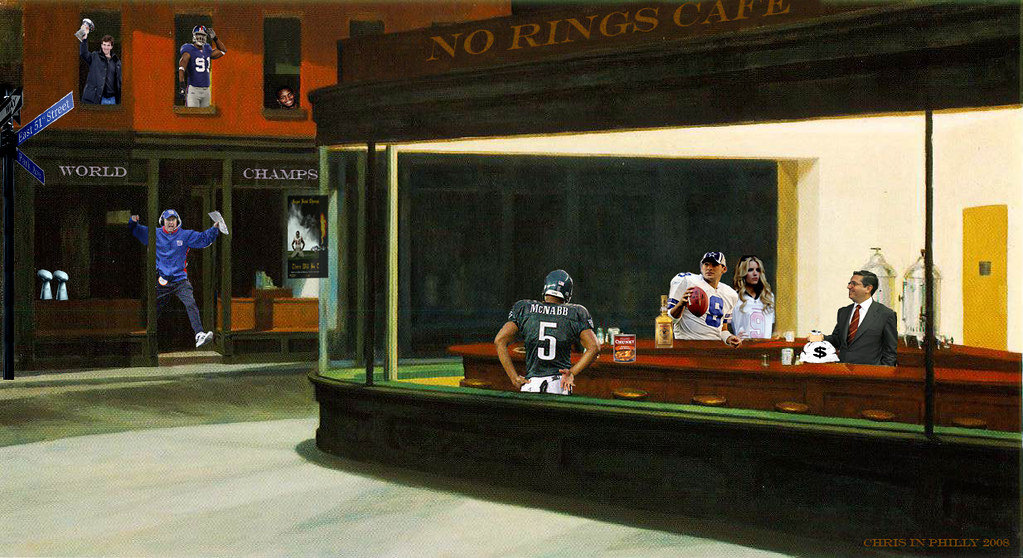 
Ha! Another favorite from the old days.

Anyone have the All Year Baby bus?
When are people going to realize that most of these reporters
jlukes : 1/24/2020 1:43 pm : link
especially the ones that work for ESPN, are paid to make HOT TAKES and to generate traffic.

Bomani is doing exactly that and it is working like a charm. The general sports public loves getting all worked up over this stuff time and time again.
My memories of McNab
jonnyess : 1/24/2020 1:54 pm : link
...are filled with multiple images of him throwing an 18 yard laser...on a 24 yard square-in


Good to see you back. It is my sincere hope that you will be posting some new classics for the new era this coming year. Of course, the new era needs some Ci{ worthy moments as well. *grin*
You guys are crazy
Tuckrule : 1/24/2020 2:05 pm : link
Was Mcnabb better? Probably not. But let’s not act like he was a scrub. They gave him TO and he dominated the NFL. Before that he was throwing to James thrash. Todd pinkston and Freddie mitchell. His teams were awful skill wise. He carried them year after year to division titles. Mcnabb had a great career. People remember him puking but let’s not act like he’s nowhere near Eli’s level. He most certainly is in the discussion. His career was damn good and he kept the eagles afloat for years. Early 2000s he was a top qb for a span of 5 years.
McNabb choking when the stakes
Thunderstruck27 : 1/24/2020 2:13 pm : link
were at their highest says a lot about him as a player. Eli played spectacular in the 2 runs to the Super Bowl and made amazing plays to win. McNabb puked while TO tried to carry him.
RE: You guys are crazy
Lines of Scrimmage : 1/24/2020 2:25 pm : link
In comment 14792541 Tuckrule said:


I agree he had a great career. He also always had a very good OL and a offensive genius as a coach supported by one of the best D's under Johnson. There is a lot of talk about DG's mantra but the Eagles had it and he did not get them over the top.

Let's also realize the NFL East was very weak (1999-2004) so they feasted on subpar comp. That changed when TC, Bill and even Gibbs arrived.

I certainly have respect for McNabb but I do not think he is all that close to Manning.
Remember McNabb picking up a phone on the
ATL_Giants : 1/24/2020 2:25 pm : link
Giants sideline?
Lines of scrimmage
Tuckrule : 1/24/2020 2:29 pm : link
Good points about the offensive line, Reid and the defense. However we can use that same argument about the weak division with Brady and the pats but nobody seems to.
RE: Lines of scrimmage
Lines of Scrimmage : 1/24/2020 2:37 pm : link
In comment 14792586 Tuckrule said:


Sure we can. Brady has definitely been supported with a weak division, the greatest Coach of all time and a strong roster.

If people would take a look at QB's stats objectively (Bradshaw, Aikman) objectively they will see their stats diminished as the teams around them did. The HOF's put the team over the top when enough of a supporting team exists imo. I think McNabb had the team.
It's not even close
montanagiant : 1/24/2020 2:43 pm : link
Eli beats him in TD's, Yards, Completion %, Super Bowl MVPs, TD %, Game-winning drives, YPA, Yards per game, Completions, Games played.
link - ( New Window )
Eli CLOSED under pressure.
VinegarPeppers : 1/24/2020 3:37 pm : link
McNabb puked on the field.

I can’t take stupid anymore. And I can’t take these unfounded, boring hot takes. Cool you said something. Congrats. Now fuck off.
Who is bomani jones?
Torrag : 1/24/2020 8:12 pm : link
Seriously I've never heard of him.
McNabb is unfairly remembered
Rafflee : 1/24/2020 10:22 pm : link
Andy Reid was so impressed by his own "Genius" that He starved the Eagle offense of Impact Players---short the brief TO "Era". The Latter and recent portion of Reids Career doesn't feature that mistake.

McNabb was a Great Player. Some of my Philly Friends used to criticize McNabb....I'd ask them to name 5 better contemporary QB's and they began babbling after #3.


Great is not the right word. Definitely very good. A 6X pro bowler.