^This. These people have nothing to do until the combine. Remember the guy from CBS who did his 2019 redraft and had us taking Minshew at #6?
I doubt..
FatMan in Charlotte : 2/10/2020 11:44 am : link
there is even any smoke here. Judge seems like a guy that would not back this type of move, and I can't see Gettleman going after a under-performer who has had notable work ethic issues.
So,
Gman11 : 2/10/2020 11:49 am : link
they're going to sign Clowney to mega bucks for his paltry sack totals and let Golden and his 10.5 sacks go. Yeah, this makes sense...
I see no way this happens
ShockNRoll : 2/10/2020 12:00 pm : link
I don't think the Giants are going to throw this kind of money at a player whose effort and health have always been in question, and as earlier posters have mentioned, has never hit double digits in sacks. Yes, I believe he is an impact player, but I would not sign him. I'm hoping Ngakoue shakes loose from Jacksonville, though it seems like they'll tag him.
Its a Catch 22
WideRight : 2/10/2020 12:18 pm : link
You suck and have a history of sucking, overpaying guys like Nate Solder to suck.

So you have to pay a big premium to get anyone with talent and other options to chose to sign with you.

Which means the cap resources are poorly allocated, so you still suck, and have to overpay all over again.

Mara has given every indication that they are not spending big. I really think he wants to focus on the draft as a priority and wants no more quick fixes.

That is a very high cost....but a better deal and I would be doing cartwheels getting Clowney.
Not really a prediction when
BH28 : 2/10/2020 12:55 pm : link
he also 'predicts' the raiders or ravens signing him for those costs.

The whole premise of this article is to show 'what if' Player X signs here and the effect it has on other players and teams around the league.


This and I predicted the Leonard Floyd trade Barnwell proposes some weeks ago. A low draft pick swap for Floyd makes sense for both the Bears and Giants, if Graham can use him situationally. It's more logical than drafting Simmons 4th overall.
Ummm, this wasn’t a prediction
sb from NYT Forum : 2/10/2020 1:22 pm : link
Read the title. It just explores the domino effect of various scenarios where key FAs change teams. One of which is the Giants signing Clowney.


Agreed, this type of deal has desperate GM written all over it. Shades of 2016, we shall see.
Hahaha this isn't happening
Torrag : 2/10/2020 1:41 pm : link
He's never had a double digit sack total in his career. Injury has significantly cut short three of his six seasons. He isn't a 'bust' but he's definitely underperformed his Draft position and the hyped expectations he had coming in.
RE: the Giants had better really check Clowney's medicals
V.I.G. : 2/10/2020 1:45 pm : link
In comment 14807996 Giantsfan79 said:

Clowney is a JPP clone in my opinion. Not a bad thing. His sack totals aren't great but his overall play is very very good.

BBI loved to rag on JPP while he was here. Now he's missed.

I wouldn't do it, but I can think of worse ways to spend the money. I still think the bigger need is the LB position but man, that DL, assuming Clowney played along the DL, that's a front 3 that would tough to deal with.
this move i'd like
djm : 2/10/2020 1:55 pm : link


yea, we went 1-15 because we had a bunch of good players on defense. It taught me that bad coaches can win games but eventually, the chicken comes home to roost. 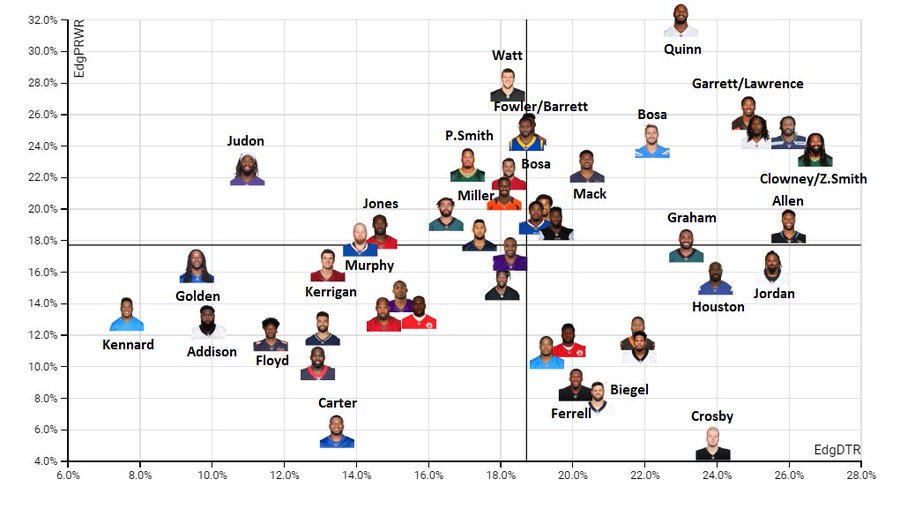 Double team rate (x) by pass rush win rate as an edge rusher (y). (as an aside, look at the lack of respect for golden or carter)

Lol, after a knuckle sandwich

Lol, after a knuckle sandwich


The best value on that chart is Robert Quinn. A guy I have been plugging for a few weeks now. Get him on a two year deal coming off, quietly, a very productive year in Dallas. He's closing in on 30 so he's not going to get a huge, long term deal in the market...

People are shitting on the idea because of that. He's never had double digit sacks and had 3.5 this year. And he's played alongside JJ Watt for the majority of his career
That’s a fun read, and a clever way of looking at...
Big Blue Blogger : 2/11/2020 3:35 pm : link
... the interconnected nature of various personnel moves.

If you are satisfied with our sack totals. I'm not. We need a terror out there and there is only one on the DL with a contract. And even if we resign Golden, STILL not enough pressure on the QB.

Heard a rumor the Skins might be willing to trade down with someone who wants a QB. If that happens I would grab up Chase Young to pair with Golden. Then pick up a LT in the second and sign a solid but not pro bowler LT in FA.
RE: I could see our GM do that
VinegarPeppers : 2/11/2020 5:57 pm : link
In comment 14808427 mdc1 said: