What was the signature play for the 1986 Giants?

Was it Geroge Martin's incredible 78-yard interception return for a TD against Denver?

Was it Mark Bavaro dragging Ronnie Lott and half the San Francisco defense 21 yards on MNF?

A dark horse candidate might even be Tom Flynn's trifecta of blocking a punt, catching the ball over his shoulder without breaking stride and running it back for a TD against his former team the Packers. 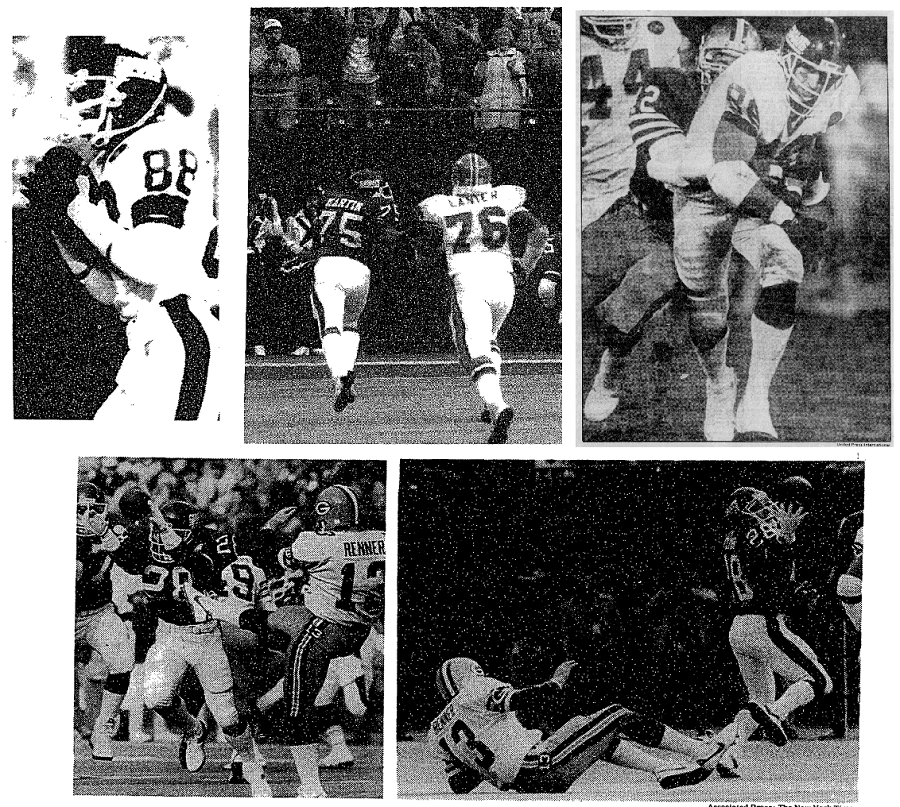 Different era, and one much preferred to the product today, IMO. In our current ticky-tack NFL that's roughing the passer and 1st down 49ers!


I was at that game with my dad.

The only thing truly profound is the passing of time.
Something that most wouldn't take into
micky : 4/7/2020 12:41 pm : link
Consideration was coming back after the tough opening game loss to Cowboys (damn Hershel Walker) and stomping SD in home opener and going on a run up to the Seattle loss.
RE: Also, I appreciate the grainy black and white photo's...
truebluelarry : 4/7/2020 12:42 pm : link
In comment 14861517 x meadowlander said:

The last one wasn't really a crucial.play, but I always loved that one. My favorite play during my lifetime is the Bavaro play.
I'm watching the week 9 game against the Cowboys ('86)
Poktown Pete : 4/7/2020 1:24 pm : link
In the Meadowlands. The Giant fans were making so much noise on the Cowboys final possession that the Refs actually held up the game. How can that be?


Actually, both are true.

Morris did have a long TD run agaisnt the Steelers with his sock flapping, but it was 1985.

Maybe Morris should have worn hightops?


This.
Jim Burt
Bubba : 4/7/2020 3:47 pm : link
blasting Joe Montana out of the endzone
interesting everyone knows the 11 superbowl team signature play
Joey from GlenCove : 4/7/2020 3:56 pm : link
how about the 07 guys.. which play would you pick?
Definately 4th and 17
Stu11 : 4/7/2020 4:07 pm : link
The other plays could be signature plays but they were more super human solo efforts. What made the 4th and 17 play so signature is that it almost alone grabbed victory from the clutches of defeat in a big turning point game. Also the play itself was such a team effort. Johnson running a great route and toe touching the sideline, Simms standing in there till the very last second and delivering a perfect throw, and though he took a huge hit the O-line giving him enough time against a dominant pass rush to go to his 3rd read.
RE: interesting everyone knows the 11 superbowl team signature play
Stu11 : 4/7/2020 4:13 pm : link
In comment 14861859 Joey from GlenCove said:

This is not a play, but I remember the Giants played the Redskins on the night the Mets clinched the series and we were up like 20-0 and the skins came roaring back to tie it up and the crowd was cheering so loud during the Redskins update because the Mets scores were being shouted out in the stands. We won, I believe on a Joe Morris TD late in the game. A glorious season.
Bavaro and 4th and 17
David B. : 4/7/2020 9:09 pm : link
Are the TWO signature plays of that glorious season. And that's just ON OFFENSE.
Shit, how many great plays were there on defense?

For me, I felt 4th and 17, week 11 was certainly a turning point. But after coming back against SF (week 13) with the Bavaro play, I felt they were on a roll where they could, and probably WOULD win it all. That was the play that showed me they wouldn't be denied.

But, sadly, I've never felt that since. Even when they won superbowls, it was never through sheer domination again.

one of the things I remember
Dave on the UWS : 4/7/2020 9:21 pm : link
about the Johnson catch, if you were listening to Gordon and Lynch on the radio broadcast, Lynch's comment was "what a catch by Johnson!". He was just standing on the sideline when Simms came to him late. That has always cracked me up. Somehow the Vikings lost track of him.
RE: 4th and 17
Matt M. : 4/7/2020 9:26 pm : link
In comment 14861724 redwhiteandbigblue said:
Yes, I realized that after. It was the Steelers, but the season before. I still love that play.

So many great memories in that year
Pete in CO : 4/7/2020 11:00 pm : link
Bobby J - 4th & 17
LT - INT VD Montana
Bavaro catch vs SF
George Martin - INT & TD vs DEN
Burt sack of Montana
Joe Morris game @ Redskins
Super Bowl safety
McConkey catch in SB
...and I totally remember how jubilant we all were watching the SB game wind down with a convincing lead. There were a lot of close victories that season if I remember correctly.
For me, Bavaro's catch and run is it
Greg from LI : 4/7/2020 11:28 pm : link
Even among the many glorious memories of that season, it stands out.

Funny part is, though, I didn't see it live. When I was that age, I had to go to bed at halftime of MNF games. I went to sleep dejectedly, thinking we were going to lose. I woke up the next morning to find a note taped to my bedside lamp. Dad left for work before I got up in the morning, but he still wanted to be the one to tell me in his characteristic all-caps block print. I can still see that note in my mind as if it were this morning...

THEY DID IT!!!"
Bavaro's Catch And Run
BlueVinnie : 4/8/2020 8:05 am : link
The 4th and 17 play might have been a more crucial play but the Bavaro play was absolutely inspiring.
I scanned the thread and tallied up the "votes"
truebluelarry : 4/8/2020 9:58 am : link
though many were just discussion points and opinions not necessarily about one play.

WHat I came up with"

I'd thought Bavaro and Martin would have gotten more votes. While I aknowledge the 4th-and-17 play as the most significant of the season, the other plays are awlays at the forefront of my mind whant I think about 1986.
Mark Bavaro dragging Ronnie Lott
Gmanfandan : 4/8/2020 10:15 am : link
I remember it fondly - watching it live (on tv) it made you sit up and drop your jaw. It was the first sign we could actually be SB Champs - inspiring.
Counter Tre
Angus : 4/9/2020 5:57 am : link
to Joe Morris.
Pages: 1 2 <<Prev | Show All |