I believe the 24-team "playoff/play-in" was approved. some details remained though, such as draft, seedings for the top 4 in each conference, logistics like location, testing/symptom handling, etc.

below is the proposed "playoff/play-in"

I believe this is what was approved. 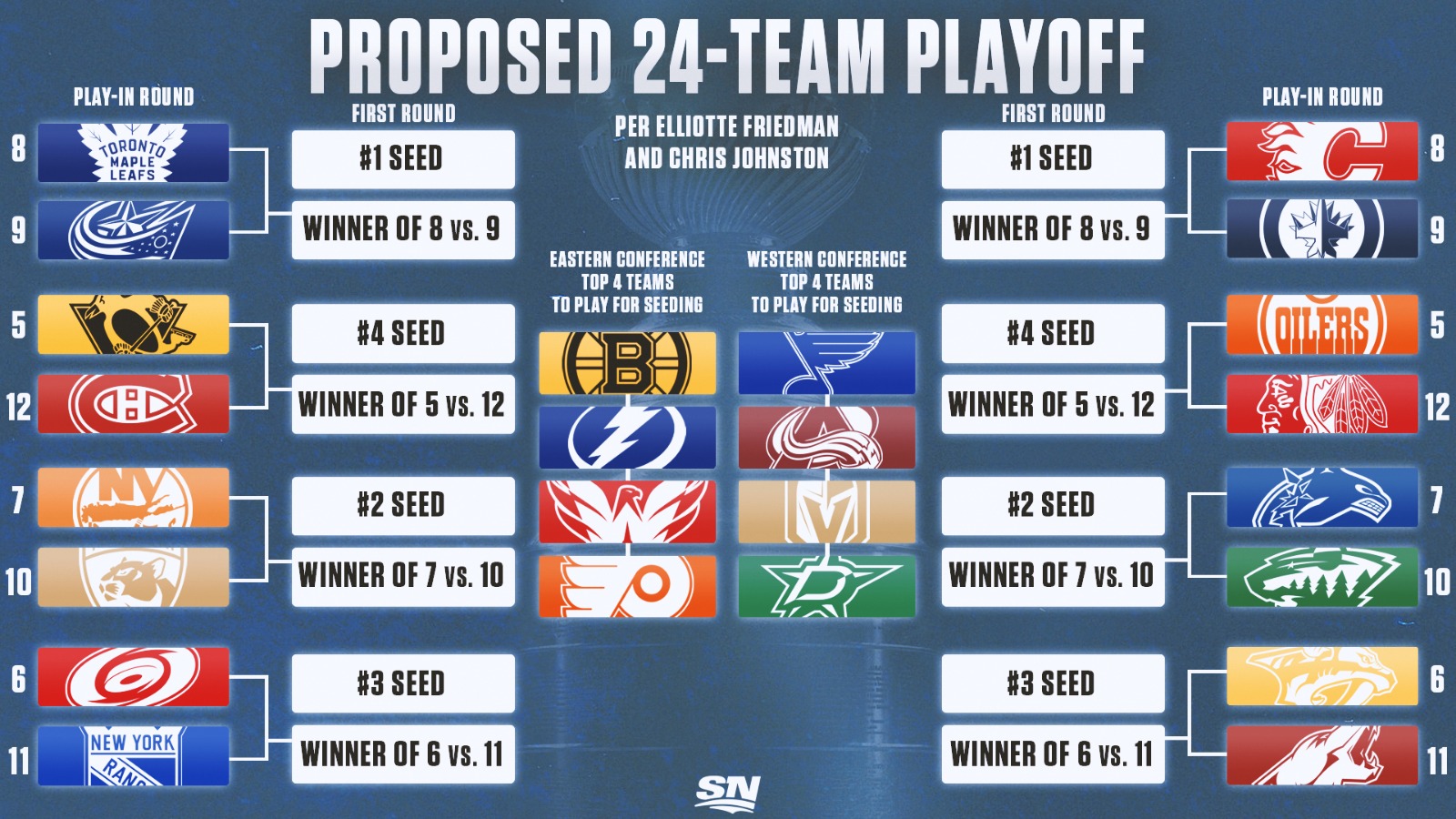 
Yep. Both two cities and four cities have been reported. Perhaps we find out today.

I'm of the opinion that this is a good plan when you factor in all the various circumstances at play. Obviously it's flawed, but any return-to-play plan was inevitably going to be flawed.


the play-in round will be best of 5 (teams 24 - 17), then I think once they get it down to the traditional 16 team playoff they were hoping for best of 7 the rest of the way.

A lot of speculation, maybe today's pc clears up some of that.
Makes sense, thanks
mfsd : 5/26/2020 1:04 pm : link
I’m fired up regardless of format. And yes I’m no small way bc the Rangers get a shot
I have mixed feelings about this
Mike from Ohio : 5/26/2020 1:32 pm : link
Happy at the thought of hockey coming back sooner rather than later. Assuming this can be done in a way that minimizes risk to players I am all for it.

But on the other hand, how much practice will these teams be able to get in before this tournament starts, and what will the level of play look like after such a long lay off and (i would assume) a brief practice time?

This feels more like an exhibition for fans than a resumption of the 2019-2020 season. It's almost feels like a season reset with only the worst teams in the league not participating.
Ideally
Anakim : 5/26/2020 1:35 pm : link
Rangers win the Stanley Cup, Hurricanes lose in the first round, as do the Maple Leafs, and both teams move up in the lottery (Rangers get the lesser of the Hurricanes/Maple Leafs pick)
......
Route 9 : 5/26/2020 1:47 pm : link
Jesus. Now we're moving.

Sports. Bring them back. Now. I don't care about formats and if the players have to play naked.

This is BORING. Sports. Bring them back. Now.
Any Devil fans here? (All 2 or 3 of them)
Route 9 : 5/26/2020 1:56 pm : link
Today's the 20 year birthday for the Stevens hit on Eric Lindros lol what a night
NHL training camp
pjcas18 : 5/26/2020 1:58 pm : link
is normally only 4 weeks or so, so I don't see that being something fans should be concerned with. I think teams will have 3 or 4 weeks to prepare (I assume, but we'll find out today). The league I think has allowed for expanded rosters to maybe help for those people who are still concerned.

The thing I'd be concerned with is symptoms and how players handle them. No hockey player is going to take themselves out of a playoff lineup in my opinion.

from what I read there will be no fans.

But if they don't play at all I think they'll lose something like $2B dollars this year and it will effect future salary caps, and the players will bear the brunt of the losses.

Or, are those smug penis-head physicians giving more contradictory explanations on what to do this week?
Pierre throwing some water on the fire
pjcas18 : 5/26/2020 2:11 pm : link

Pierre LeBrun
@PierreVLeBrun
·
1h
Again, let me repeat myself, the format is just the first step. So many more hurdles to overcome, more negotiations needed between NHL/NHLPA over hub cities, testing, protocols... the format is just Step 1. No guarantee yet the 2019-20 season is completed despite best intentions
RE: Also for NYR fans
Giants in 07 : 5/26/2020 2:11 pm : link
In comment 14911038 pjcas18 said:


We have two 3rd rounders this year. I wonder if one would be enough. I don't think I would do Lias + a 1st even though we have 2 first rounders and NYR doesn't have a second round pick.
I think this is pretty great.
Eric on Li : 5/26/2020 3:00 pm : link
no it won't be the same and honestly they should call it something other than the stanley cup because it's obviously different, but that was an unavoidable reality. Covid Cup? Every player on the winning team gets to have the cup within 6 feet of them for 1 day.
What will be most interesting is how these lineups look vs. pre-COVID
csb : 5/26/2020 3:12 pm : link
Teams in playoff pushes don't call up college/Junior guys who just finished unless they fill a huge need (i.e. Charlie McAvoy) in the lineup. They are historically conservative and try not to mess with the lineup they've been using all season. With this time off you might see more young guys playing significant minutes - will be fun to watch.
It's weird but it's still a legit cup IMO
Metnut : 5/26/2020 3:14 pm : link
The winner is going to have to win at least 4 playoff series. The majority of the regular season was played, so any team that had any chance to play for the cup has been invited to play. By the time we get to the last 8 teams, everyone will have had 6 weeks of camp and games to get up to speed.

Neutral empty sites are going to be weird, and we'll all look back at this being a wacky year, but it's still not going to be easy to win a cup and the cup winner will have brought a pretty cool experience to their fans in this tough time.
not trying to be the pessimist
Br00klyn : 5/26/2020 3:24 pm : link
because ill take any sports we can get right now. BUT, im guessing teams in the "playoffs" will have to go through an accelerated training camp to get back into game shape? If the play in round is a best of 5, and a team gets swept in 3, it seems like alot of work for these guys just to play 3 games and go back into the offseason.

I posted a chart a while ago about draft picks and success odds.

not enough difference between pick 29 and pick 45 for me to miss out on a player I like.


I wouldn't but the Rangers seem to like him. Also, I wonder if they want a young Fin to help make Kakko more comfortable. I never like these "player needs a babysitter" scenarios, but I can only imagine what it's like for a 19 year old in a foreign country and not many people speak your language.

I think the Rangers are maybe second guessing their approach with young players maybe after both Andersson and Kravtsov had rough starts in the US.
RE: So are the top four seeds in each conf...
pjcas18 : 5/26/2020 4:16 pm : link
In comment 14911111 BillKo said:


no, I think they have a round robin like tournament that I believe impacts their seeding. I'm looking forward to hearing about how.
i think they nixed the 10 regular season games
MetsAreBack : 5/26/2020 4:26 pm : link
because it makes less money / ratings than a play-in format. Also wonder if there are more health risks when teams play a more diversified schedule of opponents. Agree it would have been more fair though.

I get Carolina nixing this because with 20 teams theyd have received a bye.... why was Tampa against it?

Would have though Pittsburgh and Edmonton as 5 seeds would have pushed for the 20 teams as so many of us have... i guess being good league citizens

I just question the idea of trading Andersson right now. His trade value couldn't possibly be lower. Why not hang on to him and at least hope he rebuilds some value?
RE: i think they nixed the 10 regular season games
pjcas18 : 5/26/2020 4:30 pm : link
In comment 14911120 MetsAreBack said:


Only reason I can think of is because they started his ELC in year 1, this year is year 2, so after next season he becomes an RFA.

Possible his value won't get higher than his draft pedigree (#7 overall?)
Bettman might want to invest in an interior decorator,
Mad Mike : 5/26/2020 4:35 pm : link
My bathroom is more aesthetically pleasing than the room he's doing this from.
'unfair chance to make the playoffs in a best-of-five series'
Torrag : 5/26/2020 4:36 pm : link
The shortened season denied those teams in the race their chance to make a run down the stretch. Having the 5 game play in is probably the fairest decision they could have arrived at although a limited round robin applied to the regular season point totals could have accomplished the same thing.

formal training camp to open no earlier than 1st half of July.

No dates for games, but they expect the season to go into early fall.

The first and second round length (5 or 7 games) still TBD.

Frankly I'm fine with all these decisions so far. The initial play in is really a regular season substitute so having the 5 minute OT and shootout works and is fair.

Including maybe biggest impact is Jake Guentzel I think playoffs were a long shot for him initially, but now it's likely.

Not sure why they just don't wait until after the qualifying round for the lottery.

Currently the lottery is planned for 6/26 with placeholders for the 8 teams knocked out in the qualifying round.

I think you misheard. Regular season OT is for the round-robin games for the top 4. The play-in and subsequent games are all playoff OT. And no round other than the play-in has been set at 5 games yet, it's TBD.
.
pjcas18 : 5/26/2020 4:49 pm : link
Eliteprospects
@eliteprospects
·
3m
The NHL Draft Lottery will occur on Friday, June 26th. Teams will be included in a lottery draw for the No. 1, 2, and 3 selections.