I believe the 24-team "playoff/play-in" was approved. some details remained though, such as draft, seedings for the top 4 in each conference, logistics like location, testing/symptom handling, etc.

below is the proposed "playoff/play-in"

I believe this is what was approved.


You made a salient statement.

And other than shoddy internet I have to say not a bad job from Bettman. 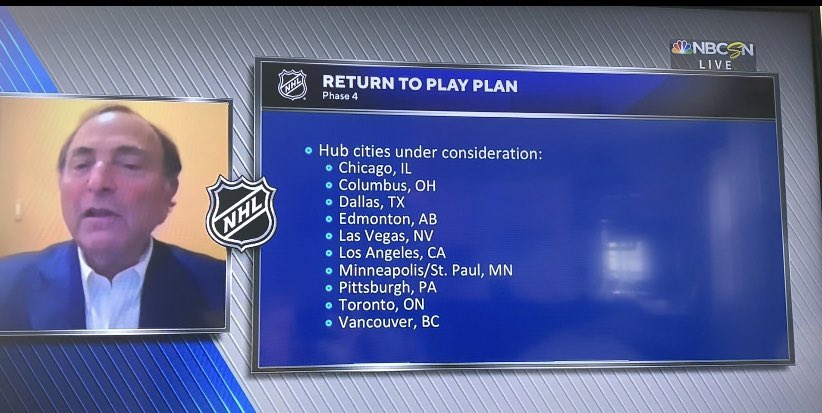 And if all 3 top picks are from the 7 teams not in the play-in then it's only one phase.

if one of the teams from the play-in gets a top 3 pick they'll have a phase 2 to determine which team got the top 3 pick and where everyone else picks.

I don't understand how they figure it out if for example team 8 wins pick 1. Who is team 8? Because today it would be team 24, but what if CHI or MTL (whoever you have as team 24) wins their play-in series - then they count in the 16 playoff teams.

The draft is going to be a mess.

I still think they'd be better served just waiting until after the play-in round and have one phase with 15 lottery team, but....

Bob McKenzie
@TSNBobMcKenzie
NHL Draft Lottery will be on Friday June 26. The Nos. 1, 2 and 3 picks will be up for grabs. Fifteen teams — the seven who are no longer playing plus 8 more currently identified as Teams A, B, C, D, E, F, G, H — will be in the lottery. Same lottery odds as prior years.

Lemieux to Crosby to Lafreniere

the only other "seller" I think in the play-in would be the Wild and they traded Zucker to the Pens.

As much as people are concerned with a rushed end to this season/playoffs, I think it's going to be bad for teams like BUF and DET (for example - really any of the 7 that don't qualify for the play-in) that will now possibly go from early March 2020 to January 2021 with no meaningful hockey.
.
pjcas18 : 5/26/2020 6:39 pm : link
Amanda Stein
@amandacstein
·
5m
Bill Daly says the league is sensitive to the seven NHL teams who are not participating in the playoffs and the long lay-off they will have between seasons.

That's something the league will be looking at going forward and there might be different off-season rules as a result.
Sounds like players
pjcas18 : 5/26/2020 6:54 pm : link
signed to ELC's during the pause will push to next year and cannot play in this year's resumed playoffs. This includes Alexander Romanov (MTL) and others.

Jared Book
@jaredbook
·
17m
Bill Daly says that as of right now, the league's position is that no club is entitled to sign a current year contract, which would mean TBD contract start dates would have to be pushed to 2020-21.

If CAR wins, then the Rangers get a lottery pick (their own) and CAR pick.

If NYR win then they get a lottery pick - the worse pick of CAR or TOR if I understand it right.

Toronto loses to the Blue Jackets, Carolina loses to New York (on New York's way to the Stanley Cup), BOTH Carolina and Toronto win the lottery: We get Carolina's pick, no matter what it is (even first overall).
RE: It's really confusing
Anakim : 5/26/2020 9:17 pm : link
In comment 14911302 Anakim said:


And wouldn't that suck for Carolina. They get ousted in the first round, win the lottery and the #1 overall pick by some miracle...but because Toronto won also and will be picking in the top-10, the Jerks will have to give that #1 overall pick to the team that ousted them in the playoffs.


Oh, and they would have Brady Skjei to show for it
Sounds like
pjcas18 : 5/27/2020 11:58 am : link
Sorokin and Kaprizov will be in the KHL another year. I thought Kaprizov signed his ELC, but I guess due to circumstances around 2020-2021 season begin, it makes more sense for them to stay in Russia.

I hope Romanov isn't caught up in this too.


Of course. The isles are a joke. Still nobody wants to play here. Good thing varlarmov was brought in over lehner cause he was gonna help bring sorokin over
Not so fast...
Diversify yo bonds : 5/27/2020 12:15 pm : link

I'm not linking to the .ru site.
Also re Isles
Diversify yo bonds : 5/27/2020 12:16 pm : link
Pelech cleared to practice
Haven't read through the thread
Andy in Halifax : 5/27/2020 12:21 pm : link
But my first impression is the Devils get the screw job here. BNot only do they miss out on the playoffs despite Mtl getting through with essentially the same record, but if Vancouver loses their play in round, NJ likely won't get that draft pick this year.

This plan had little effect on ottawa so I don't really care, but I think this format is ridiculous. Just looks like they bent over to ensure Chicago, NYR and Monteal get to play. Big markets, big fan base, etc. I get it, they need as much attention as they can get but it seems silly to me. Oh well, no point bitching about it, unless you are NJ.
RE: Not so fast...
pjcas18 : 5/27/2020 12:22 pm : link
In comment 14911710 Diversify yo bonds said:


Good, hope it's just for clicks. the guy I quoted was a Fin though, not a Russian, but I imagine he got it elsewhere (Russia)
This is just for fun
pjcas18 : 5/27/2020 1:34 pm : link
and I thought the NYR would be a team no one wants to face but I would love to see the matchups they had that produced this. 840 cup wins for the Rangers in 10,000 simulations? Just a hair below the Bruins?

In any case will be fun to see TBL knocked out early again.


Let the hate flow... seriously though I see an issue with Chicago, Montreal and Arizona getting another shot... but NYR ... two points... back of Toronto and Columbus with 12 games left for all teams... one point ahead of Florida with one extra game played... and 1- and 2-points back, respectively, of NYI and Carolina while ceding two games. None of that is insurmountable.

NYR deserved their shot... maybe not in this best of 5 format with such as high a seed as Carolina, but one could have easily argued for a best of 3 or one game playoff with Florida... to then get into a 20 team tournament.

Considering MLB cant get its shit together on economics, football is at huge risk since they start in the Fall when that second spike probably does come to some degree, and basketball is looking at late July at best....

I probably would have just kept it at the 16 current playoff teams and said too bad if you were close, seasons end and the only gripe I think would be NYI because they had two games in hand on the 7th and 8th place teams and were only 1 pt behind them. Similar with MIN in the West.

I will gladly take the playoffs over a chance at the lottery every single time I have that choice.

But from what I read no team has worse odds at the SCF and hurt their lottery odds more than MTL.

and then Sam Stern added this about Kakko:

But "recover" from what exactly? Seems like a dramatic tweet. And we're going to be living with this thing for years if not longer... they'll have to make the same decision in the fall/winter, in fact next season is probably more dangerous than this summer.
Plus the youth
pjcas18 : 5/28/2020 9:30 am : link
are resilient at a much different level than grown men. I think Kakko will be physically fine - not sure what the other tweet was in reference to about recovering.

I just don't know if he or Domi are at greater risk of something COVID related due to their medical conditions.

Cirelli taking a job as a waiter was kind of funny.
link - ( New Window )
kakko at 19 has had months off exactly what do they think...
Torrag : 5/28/2020 1:10 pm : link
he has to 'recover' from? I don't know where he's living right now or what the lifestyles restrictions are but I bet if he has access to the ice he's skating daily. As far as diabetes these clowns have no idea if there is even any added 'risk'. So why are they pontificating about it? Did the teams Domi comment really need expanding on? Seems pretty self explanatory.

Chalk it up to another glacially slow corona day and nothing worthwhile to discuss.
Just the habs with Domi
pjcas18 : 5/28/2020 3:07 pm : link
as you would expect.

Larry Brooks
@NYP_Brooksie
· 4m
On zoom conference call, John Davidson says that Rangers "will listen to science and the medical people" regarding playing status of Kaapo Kakko, who has type 1 diabetes.

Also,
Friedman has a brief blurb on Lias Andersson and the potential for him to play in today's return(?) of 31 thoughts. Doesn't sound like he knows anything more speculating based on the contract status.
Supposedly the Hurricanes made two alternative proposals.
Mad Mike : 5/28/2020 4:09 pm : link
A) Having 3 more regular season games and then a regular playoffs bracket off those "final standings", and

B) Making the Rangers win 4 of 5 to advance against them.

It's unknown whether they also proposed that Shesterkin would have to play without a stick, or Panarin and Zib would have to skate with their laces untied.


I understand where the Hurricanes are coming from, they werent at risk of missing the postseason so this is added risk. I'm surprised the Penguins and the 5-6 seeds in the west didnt also fight this solution... especially as we are now seeing training camps wont start until mid July which is really disappointing and overly conservative in my view.

As I've said a few times, the Rangers did deserve a shot though - I would have had them play a one-game playoff with Florida given how tight they were in the standings (Rangers led by one point but played one more game, so its not reasonable to just award Florida on a fractions of point higher PPG). Then had 20 playoff teams total.

Canes D should be good, I don't think they were counting on having Hamilton when they traded for Skjei and Vatanen (Hamilton is a RD and Skjei LD, but I'm still not sure they acquire Skjei if Hamilton was healthy). They're legit 8 D deep.

Biggest weakness IMO for CAR is in net. Mrazek has been good, but I've never been a fan of his.

Because they definitely were if the season played out as normal

To you guys that play or have played hockey competitively, how do you see the level of play going in these playoffs? I feel like the most skilled players are going to take over more than usual. In normal years, a good team effort can neutralize star players, but who knows if teams/players will be comfortable after such a long pause
Pages: 1 2 3 4 <<Prev | Show All |  Next>>