truebluelarry : 5/30/2020 6:20 pm
This morning I awoke to an email from an acquaintance (and BBI lurker) who works on the Giants all-time roster for the media guide each year.
In the message he said while going over his data that he thought Hein - who has always been credited as never having missed a game over his 15-year career (in which he played 60 minutes many times) may have missed a game or two in 1933 & 1936. 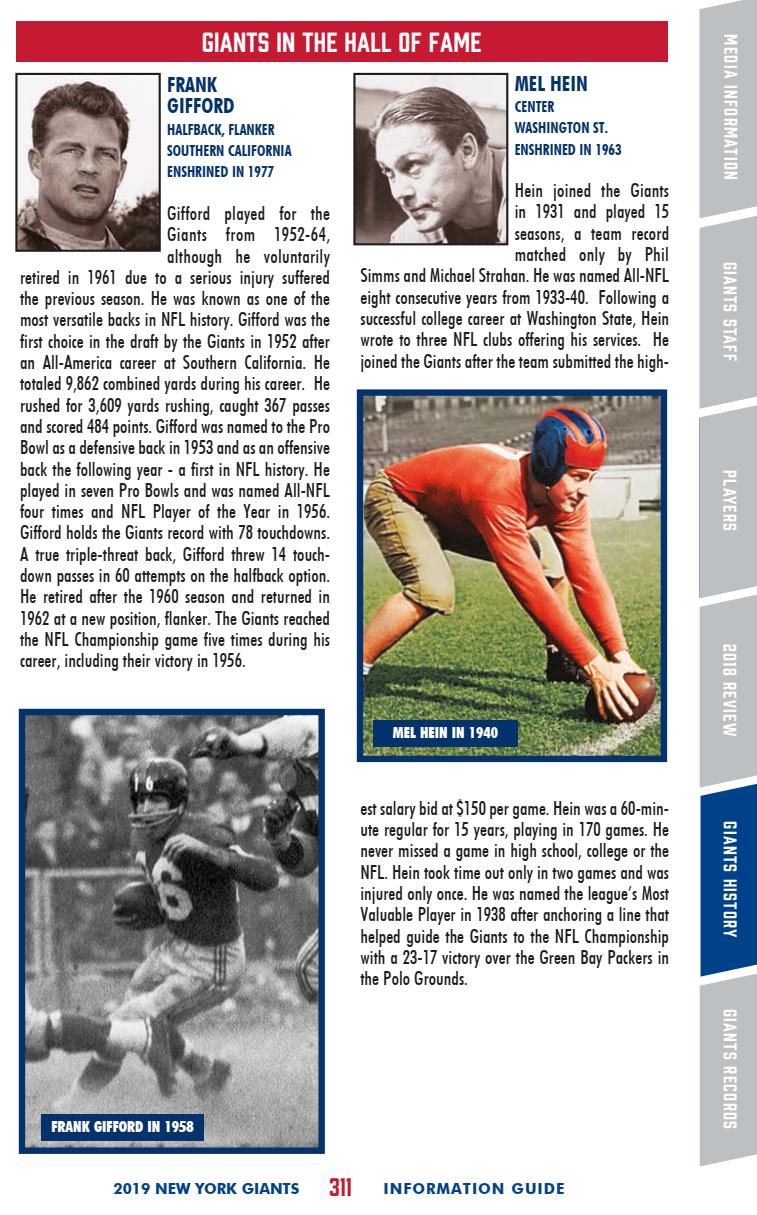 So I spent a good chunk of my morning plundering several newspaper archives spanning the 1933 & 1936 seasons.

I am confident Hein played in every game in 1936.

Things got interesting in the aftermath of the Giants-Bears 3-3 tie on November 19, 1933 at the Polo Grounds (a magnificent game and very intruiging in its own right, but thats a story for another day). As one would expect, the contest was a very physical affair, and apparently Hein was rather banged up afterward.

The Morning Call from Paterson, NJ stated on Thursday November 23 that Coach Steve Owen planned on using Hank Reese at center for the Packers game that Sunday to periodically spell Hein. 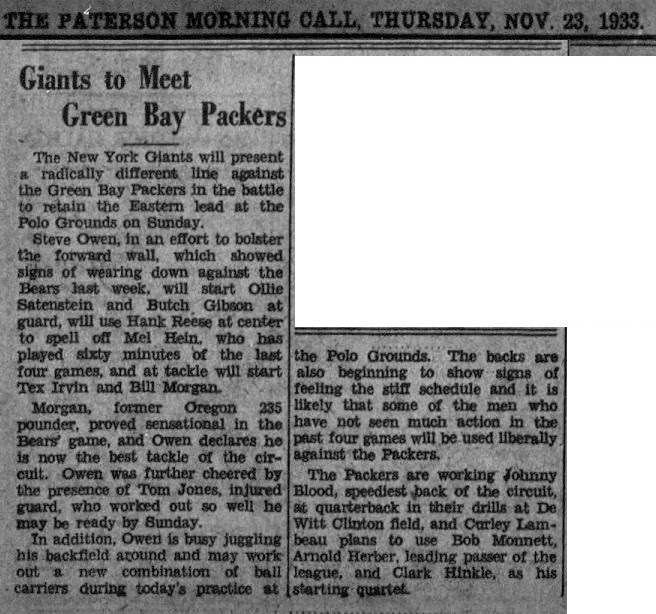 This is confirmed in the box scores the Monday after the game:

There is no chatter on Hein's condition following the game, nor leading up to the Thanksgiving contest against the Brooklyn Dodgers at Ebbets Field on Thanksgiving Day Thursday November 30.

But, careful reading of the box score reveals Reese started at center for the Giants. Apparently still banged up, Hein was not able to suit up on the short week (see, Thursday football has always been a bad idea!). 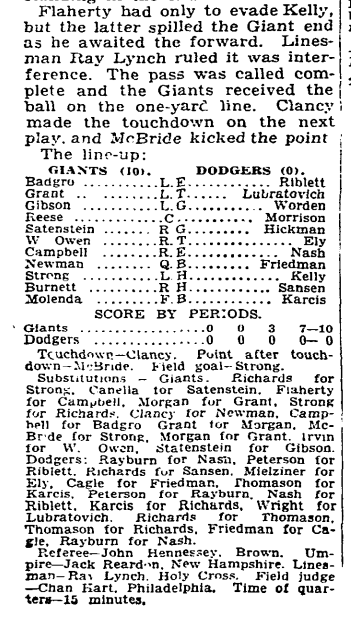 Although substitutions are not listed in the Daily News, the Times shows Hein did not participate.

In addition, the pregame injury reports leading up to the Sunday December 3 game against the Pittsburgh Pirates at the Polo Grounds (which would be the Giants third game in eight days!) confirm Hein's absence from the action in Brooklyn: 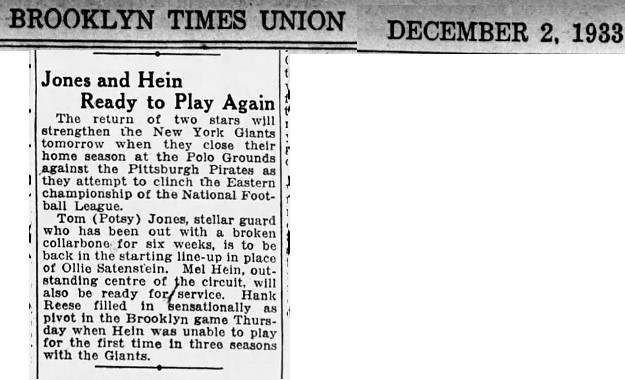 The box scores after that game indicate that Reese once again started at center for New York, but Hein saw action as a sub: 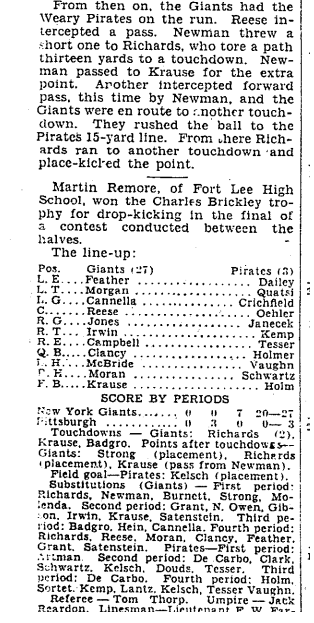 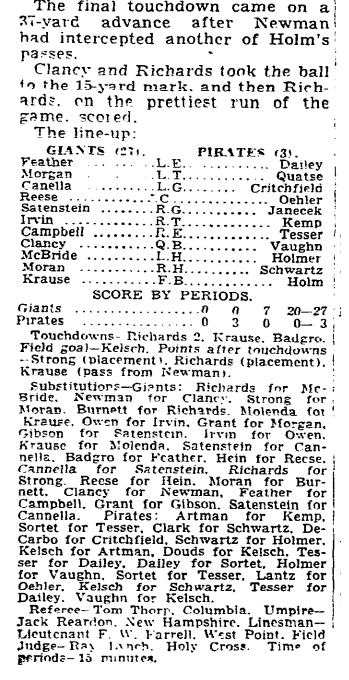 While perusing the archives throughout the 1936 season, this wire fun-fact was sprinkled across the country in mid-season, stating Hein had missed only one game during his first six years of pro ball:

We now know when that one game was - Thanksgiving Day November 30, 1933 at Brooklyn.

It looks like Reese played in two championship games for the Giants (winning in '34) and then went on to coach the New York Yankees football team. 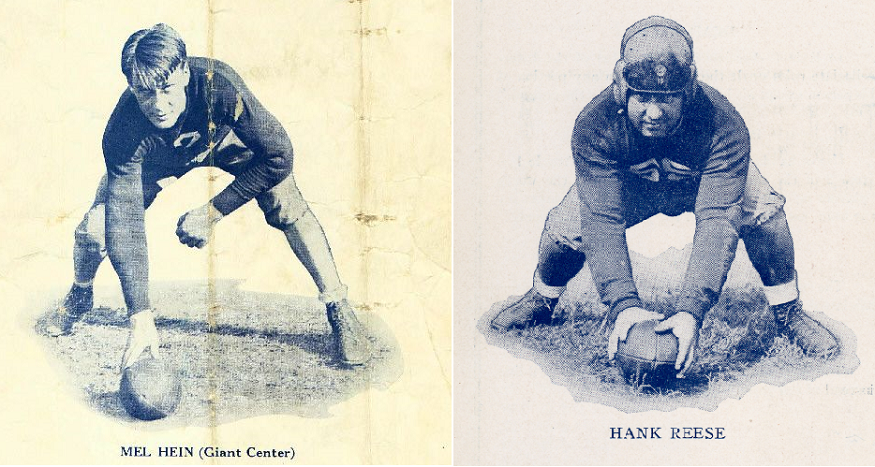 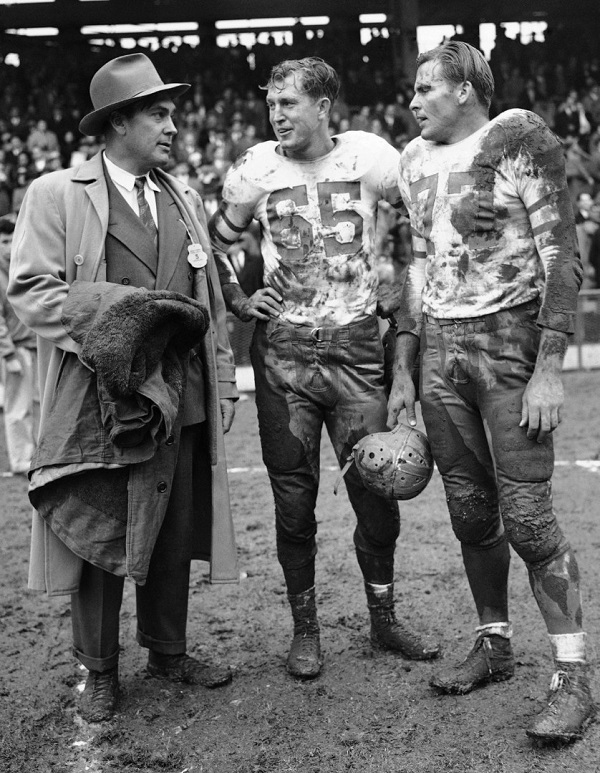 11/23/47 LA Dons at Brooklyn Dodgers - I love the contrast of Hein's sharp suit and fur lined overcoat with his muddy cleats!

and the above mentioned NY Yankees 1949 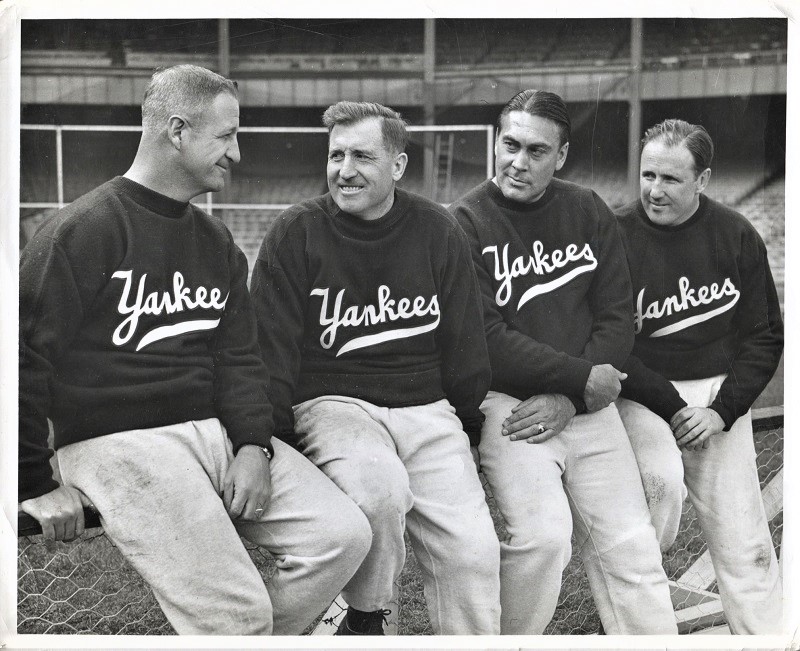 I haven't been able to ID the gentleman on the left, second from left is Red Strader, Hein and Jack White 1949

After one season with the LA Rams in 1951 Hein spent 15 years as the line coach at USC. Interestingly, while at USC Hein became friends with Al Davis, and Davis used to show old film of Hein to Jim Otto while coaching him with the Raiders. 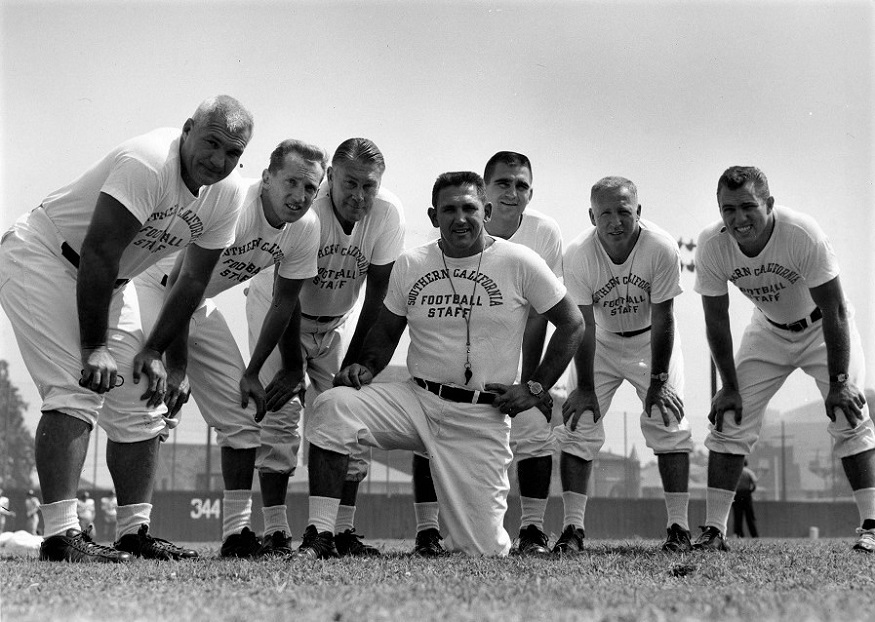 Center was a vital position back then. Every team used some variation of the Single Wing, which did not have a QB under center. Centers were required to snap to any of backs, not just the halfback who was directly behind. They also frequently snapped to players in motion.
Doesn't prove anything
WillieYoung : 6/1/2020 9:22 am : link
He could have snapped for punts or field goals. Seems to me someone in the publicity department would have known if he missed a game.
RE: Doesn't prove anything
truebluelarry : 6/1/2020 11:23 am : link
In comment 14914002 WillieYoung said:


That's not true at all - there was no free substitution prior to 1949, it was a single platoon. The starters did everything, offense and defense and there was no concept of anything called "special teams". That's why box scores tracked substitutions. When a player left the game he was not permitted to return until the start of the next quarter. If your sub became injured in the same quarter you had to find someone else to put in his spot.
RE: Doesn't prove anything
truebluelarry : 6/1/2020 11:25 am : link
In comment 14914002 WillieYoung said:


As for the "publicity department"...they need our help! ;-)