Dunedin81 : 6/12/2020 4:55 pm
My draft review usually runs to seven or eight pages. I don’t have 7-8 pages of material his year because they have three picks. On the whole they did as well as can be expected, so long as they sign the three of them. I’ll add to it when they sign some UDFAs, a few of whom could absolutely be draftable players.

Wells is an advanced college bat, among the top 4-5 college bats available in this draft. He slashed .357/.476/.560 in a season and a half at Arizona and .308/.389/.526 with 7 HRs with wood bats on the Cape. He’s not a speed demon but he swiped 7 bags at Arizona and 8 on the Cape without a caught stealing. His BB:K at Arizona was 63:57 in 351 PAs; on the Cape he had more swing and miss (22:46 BB:K in 180 PAs) but he was hitting for significantly more power. He has a sweet lefty swing that sprays to all fields but with pull power that can make the most of the short porch at YS. His exit velos and hard contact rate are elite. He has a mature approach and doesn’t give ABs away. He draws some comparisons to Kyle Schwarber at a similar age. He enters the system as probably the most mature bat of consequence.

But. Wells’s defense is far less mature and its progression far less certain. To my knowledge, we don’t have CS stats for Arizona, but he threw out just 21% of would-be base-stealers on the Cape. Wells had an elbow injury in high school that necessitated a PRP injection, and arm grades that were borderline plus in high school are much more mixed now. He has the speed and agility to handle the transfer piece well, but even if his arm is at full strength he’ll need reps. He has earned solid grades for framing – both from coaches and from Trackman – but he still struggles with blocking (7 PBs in 22 games behind the dish on the Cape.

Wells gets extremely high grades for his makeup. His coaches glow about his intelligence and his competitiveness. He was a 4.0 student at Arizona. His coaches rave about his gameday preparation and his weight room work. The draft night video of his family celebrating was proof of that. I heard saw whispers NYY expects him to be a long-term left fielder, but smart money has them letting him work on catching with new catching guru Tanner Swanson, a highly regarded position coach whom they swiped from the Twins to coach at the big-league level and manage their MILB catching development. I certainly could see some measure of injury or defensive stagnation or even just the bat moving much faster than the glove convincing NYY to move him off the position in a year or two. It’s a stacked position in the low minors. They have three prospects in whom they’ve invested high draft picks (Breaux and Seigler) and money (Antonio Gomez) so reps might be at a bit of a premium.

Hauver played LF for ASU because Drew Swift and Alika Williams constituted a top 3 or 4 DP combination in all of D1 ball. He wasn’t a great defender there and would have to really hit for the bat to play, plus he was a HS SS, so it’s easy to project he’ll play somewhere in the dirt. Refsnyder and Solak were expressly drafted as 2Bs and Josh Smith seems likely to excel there (though he can play a decent SS) so this fits in with their recent past of drafting bat-first guys they hope can fake the funk at 2B. If nothing else they tend to build trade value. Hauver was ranked a little lower than he was drafted so there’s a good chance he’s slot or below.

Way might have been the top JUCO prospect in this year’s draft. He is an LSU commit so he may require an overslot. His performance for his JUCO this year was dominant, 58:9 BB:K over 40 IP with just 3 ER allowed. On the Cape last year he went 18:11 over 13.2 IP. He features a three-pitch arsenal, headlined by a FB that touches 96-98 but sits more comfortably at 92-94. He is a slight kid so there’s a good chance that the pitching development folks and the strength and conditioning program could see him add a few MPH as he puts on muscle. His FB has late arm-side run (a relatively high spin rate) so it’s tough to barrel up. His best secondary right now is a plus changeup that he throws with the same arm slot as his FB, said to have great tumbling action. He throws a slurvy mid-80’s breaking ball that is the weakest of the three. His BB rate suggests he has good command, but JUCO hitters can be a little more aggressive so he might have some adjustment to pro ball. He reminds me a bit of the Nick Nelson pick a few years back; he’s got a big ceiling. If the breaking pitch comes along he could really impress. With the new pitching development personnel headlined by Sam Briend, he will make an interesting test case.

He's from my hometown and been watching this young man play since his high school days.


funny this isn't really covered
No limits...
Dunedin81 : 6/14/2020 11:49 am : link
Can sign as many as they want. What is unclear is whether they can offer college tuition along with $20K. Remember though, rosters are likely to contract next year as they get rid of entire MILB levels. I’d expect 12-20 signings
I think the tuition thing is to help teams sign juniors and DES player
Phil in LA : 6/14/2020 12:13 pm : link
who would be giving up scholarships. Also, with their new focus on biomechanics EST may grow quite a bit, as they might want to keep the players in Tampa for that work.
RE: Yanks sign Carson Coleman RHP Kentucky
Mike in NY : 6/14/2020 2:22 pm : link
In comment 14919236 TheMick7 said:


Yanks also signed Trevor Holloway, a RHP from UCF and a favorite of Matt Collier (stat analyst with too much time on his hands if you follow his Twitter feed).
And a third signing,Jarrod Lessar RHP BYU
TheMick7 : 6/14/2020 2:31 pm : link
.
saw allot of Wells and Hauver
capone : 6/14/2020 3:15 pm : link
small chance wells sticks at catcher, Wells has ++ makeup and both he and Hauver can rake....

Looking back at watching ASU vs Cal on the day of the 2019 season there were 5 first round draft picks + a comp pick and 2 other high picks ..

one of my Favorite guys Jared Horn through a complete game other than a Torkelson Rocket he shut them down ,even pitched the 2 innings after a 45 rain delay ....it was 3-2 final, 5 hitter ....

Andrew Vaughn , Corey Lee, Hunter Bishop, Alec March, Spencer Torkelson, Alika Williams + Trevor Hauver and Gage Workman and other guys that went later in 2019 and 2020 a total of 14 draft picks with 8-9 guys that have a real shot at MLB.

Jared Horn has quite a story if you google him - I hope he makes it , I think he will

Aguilar told Fox 26 Houston that signing with the Yankees is “a dream come true,” but that leaving the University was “one of the toughest decisions” he’s had to make in large part because of the program that head coach Todd Whitting has built. 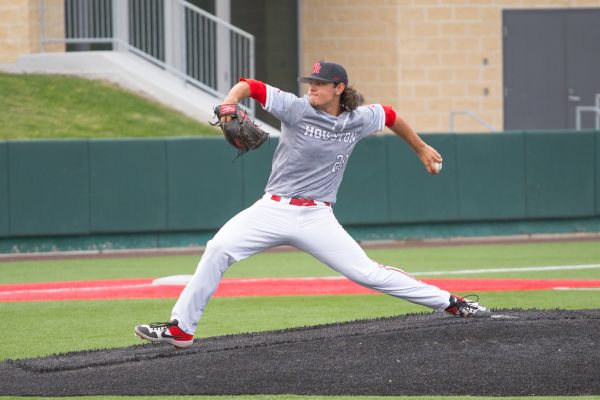