On a different hockey topic, relating to the suits filed by two CHA, OHL and Canadian Juniors against the Associations, Leagues, etc., you probably saw The Athletic article in which a third player essentially affirmed the core substance of the allegations, in depth and dramatically.

https://theathletic.com/1889350/2020/06/25/dan-fritsche-says-he-was-also-abused-in-junior-hockey-will-join-daniel-carcillo-lawsuit/
generally I think the NHL has been well run under Bettman
Torrag : 6/27/2020 6:28 pm : link
occasionally though things like this idiotic Draft methodology creep in, and I just shake my head.


Is it just me, or is the solution to what everyone hates about the lottery really simple? Just limit how many times a decade a team can win each slot in the lottery. So if a team won the #1 pick last year, the best they could win the next year would be #2. There are plenty of complications of course, like draft picks teams have traded for, but the basic concept isn't too out there.


I like your idea except for the fact that the whole point is to help awful teams (except tanking teams).

There should be some mechanism re awful teams that are awful because how poorly run they are (like Edmonton).

Vegas still thought to be one. Not sure Edmonton is anymore.

Toronto maybe.
not to mention that Sweden, virtually alone
ColHowPepper : 6/29/2020 11:20 am : link
among developed countries, adopted a policy on covid from the get go not to shelter in place or shut down the economy. Infections and hospitalizations are now trending strongly up, compared, e.g., to neighboring Norway, where the curve has flattened strongly. Anxiety is up there.

Moreover, when Swedes or citizens of EC generally look at USA, flights from which EC is considering banning (or has banned?), and US is perceived pretty much world wide as having badly mis-managed its response to covid, not hard to understand his position.
RE: Rangers prospect
Jay in Toronto : 6/29/2020 11:28 am : link
In comment 14925950 pjcas18 said:


Good decision re Covid. Only issue is if we trade TDA or Trouba
Jay,
ColHowPepper : 6/29/2020 11:49 am : link
On trades, I'll posit that with uncertainty on state of play so high, not only this season but imo next as well, League GMs may not be looking at trades through conventional lens. I think level of conservatism is likely higher. That doesn't mean what you suggest can't or won't happen.
.
pjcas18 : 6/29/2020 3:08 pm : link
The Breaks
@WatchTheBreaks
·
32m
Today's Project 2020 cards - which ones are you getting?

#Collect #TheHobby
Image
Matt Smith
@Snakebite350
·
23m
A total of 15 players have tested positive for #COVID19 as of June 29th.

In addition, since June 8th, the #NHL is aware of 11 additional positive cases outside of the Phase 2 Protocol. 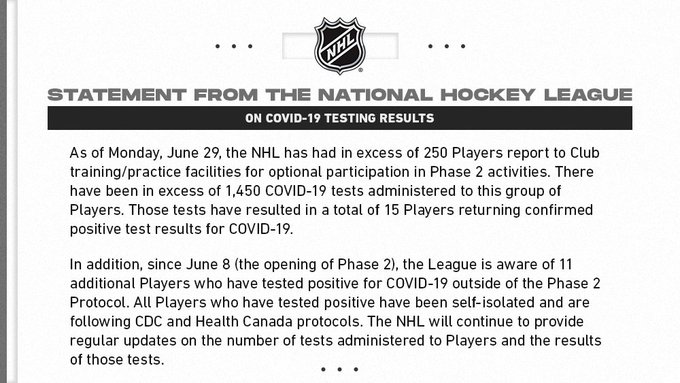 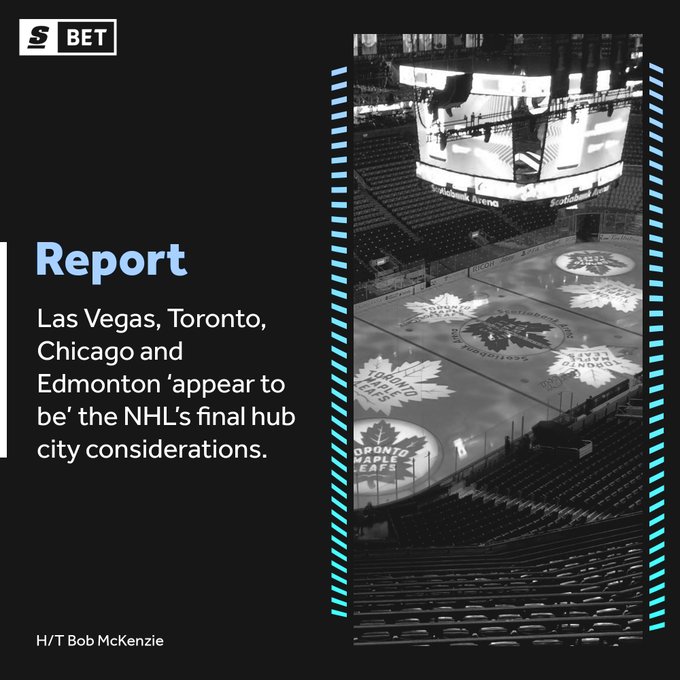 
Both countries. Right now there is a mutual closure, so as of now yes, in a few weeks who knows, but regardless i read that NHL teams and their personnel would be considered essential and allowed to cross the borders freely (or however essential travelers can cross).


Someone can correct me if I'm wrong, but it's my impression that Price has not always had the best relationship with the fan base in Montreal. After all, these are the same fans who ran one of the greatest goalies in the history of the game out of town, after he won them the cup.


Yes, there was a stretch a couple years ago when Price was struggling the fans were merciless.

Habs fans are the worst (when the team isn't doing well).


I think the quaratine rules are different>

I know that I as a returning Canadian I would have to stay in my residence and not leave for 2 weeks. In the beginning it was an honour system. Now there are spot checks with heavy fines (as it should be, IMO).
I don't think essential workers
pjcas18 : 6/30/2020 11:30 am : link
quarantine on either side of the border.

and the NHL teams would be considered essential, however, the point of the hubs is to make it you stay there until the finals.

At most (in theory) you're looking at two trips max - the hub and home when you're team is eliminated.
For Rangers fans
pjcas18 : 6/30/2020 12:59 pm : link
nice article from Forever Blueshirts about Kravtsov.

I know many fans are hard asses with the younger high draft picks, but reading this makes me feel like with Lias Andersson that the Rangers don't seem like they're treating these high draft picks as "investments".

Not saying coddle them like kids, but they're young men, in a new country (potentially) and maturity, comfort, emotional well being - all probably lead to more success on ice.

Blain Potvin
@BlainPotvin_THW
·
3m
The #NHL has agreed in principle terms to allow recently signed RFAs to play this summer. Still needs to be ratified by the NHLPA. Nothing guaranteed yet but it's one step closer to reality.
@HabsUnfiltered
#Habs #GoHabsGo


Yes - I believe so - assuming Sorokin signed his ELC, and Alex Romanov for the Habs and others in the same boat.

One of those guys can sort of provide a similar boost to a team like McAvoy did for Boston a couple years ago.
.
pjcas18 : 6/30/2020 5:21 pm : link
Frank Seravalli
@frank_seravalli
· 8m
For the first time in more than a month, sounds like Vegas is no longer a frontrunner to host an #NHL hub city. Spike in COVID-19 numbers in Vegas appears to have put a damper on their bid.

As @TSNBobMcKenzie reported, very possible both hubs cities are in Canada
Flag of Canada
: TOR and EDM
I know there's a lot at stake and you want to make the right choice,
Mad Mike : 6/30/2020 5:40 pm : link
Vegas being an example of the value in patience, but the NHL picking hub cities is making Hamlet look like a guy who really trusted his gut.
Some speculation on Twitter that if Lindy Ruff leaves the Rangers,
Anakim : 6/30/2020 9:11 pm : link
Quinn could bring in Scott Stevens to run the D


I was a voice of doubt on Ruff, but recently a lot of more credible voices have chimed in on Ruff's positive influence on the young D guys like Tony D, Fox and Lindgren
The CBA extension being negotiated in conjunction with return to play
Mad Mike : 7/1/2020 9:40 am : link
reportedly includes Olympic participation in 2022 (Beijing) and 2026 (Italy).
link - ( New Window )
Lindy Ruff
pjcas18 : 7/1/2020 9:46 am : link
is rumored to be a candidate for the Devils job.

I'm not a fan and I have not really defended Ruff per se, what I have defended is fans blaming Ruff for the Rangers defensive woes. Did Ruff plateau Skjei's development? I think that began before Ruff. Did Ruff make Trouba not shine offensively? Is Ruff to blame for Staal? But no credit given for the emergence of DeAngelo or Fox?

The system matters more than the defensive coach IMO. They work in concert - if the Rangers implemented a left wing lock for example, the D would have a lot better stats. Their zone entries allowed would be a lot better. If you care about things like that.


Trouba has never shined offensively. He's never topped 10 goals and only once has exceeded 35 points. A slightly better version, maybe if that, than McDonaugh. Its why I thought the Rangers overpaid there. This organization for whatever reason has never been great at identifying/scouting defensive talent. Maybe as you say its the systems - I know AV's system put a lot of pressure on defenders anyway.

Thankfully Fox fell into our lap at least - he looks like the best young defender we've had in a real long time.
That's my point
pjcas18 : 7/1/2020 10:39 am : link
MAB, fans were pissed that Trouba didn't become Subban.

He was never that player nor should he be expected to be that player.

And the blame Ruff took was misdirected IMO.

I fully admit I don't exactly know the real responsibility and impact the coach responsible for the D has on an NHL staff (I doubt any of us does), but I know he doesn't turn talent into horseshit or vice versa. In my head I imagine it's the fundamentals they work on, D to D reverses, maybe faceoff responsibility, communication with each other and the goalie, D pairings, line changes, etc, maybe zone exits - but zone exits/breakout is mostly system and on the head coach IMO.

but the ire was misplaced.

Still don't like Ruff, but I don't blame him for Skjei (not improving), Staal (being shitty), Smith (being shitty) or Trouba (not living up to expectations)
RE: The CBA extension being negotiated in conjunction with return to play
pjcas18 : 7/1/2020 10:46 am : link
In comment 14927203 Mad Mike said:


No idea how I missed this post, thanks for sharing his, Olympic participation is huge and so many players want it. I bet someone like Ovi might have considered retiring in 2022 if no Olympics. I think he even said something like "I'm playing I don't care what the NHL says"

Ryan Rishaug
@TSNRyanRishaug
·
3m
Principles involved remaining tight lipped on details late in the game, understandably considering how fast things can change - (Vegas, Vancouver.) Final criteria as it relates to Edmonton bid are being worked through with the league...
Ryan Rishaug
@TSNRyanRishaug
·
2m
None of the remaining issues are viewed as potential snags like we saw in Vancouver. As we reported last week, the Province has signed off on all health and safety requirements from the league...
Ryan Rishaug
@TSNRyanRishaug
·
2m
Additionally, can report that the 6 required ice surfaces will be Rogers Place, the Downtown Community Arena, and the 4 surfaces at the Terwillegar Rec Centre (which will require bussing)
I must say
MetsAreBack : 7/1/2020 1:21 pm : link
and i know this isnt their preference or the way they thought things would go... but it feels more right somehow with this entire tournament taking place in Canada.
RE: I must say
pjcas18 : 7/1/2020 1:22 pm : link
In comment 14927349 MetsAreBack said:


I don't think fans will be there, right?

either way, fair point eve though I have a hard time feeling bad for any fans of any team, though right now with McDavid and Draistl, Nugent-Hopkins, etc. EDM fans are being treated well.

Forever Blueshirts
@4EverBlueshirts
·
13m
Rangers will play in Toronto if hub city vote passes #NHL #NYR #PlayLikeANewYorker
I'll pack Lindy Ruff a lunch right now to see the back of him
Torrag : 7/1/2020 4:36 pm : link
Was never a fan at any of his coaching stops. Never wanted him in NY and don't think he did a good job with the D while here. Fox coming in as NHL ready as any player in recent history and one year of TDA having a big points year but still sucking in his own zone doesn't change that.

Hard to get a feel for what the trade market and activity will be as things normalize but I'd be looking to trade DeAngelo. His lack of size and grit combined with poor decision making in his own end just don't profile as a guy I want around long term. I wonder if his outspoken persona on social media etc will make him harder to deal?

Edmonton is a good choice to host the tournament. Can you imagine how close the camera placements are going to be in some of these rinks? NHL playoffs up close and personal.
In little more than a week we'll have players reporting
Torrag : 7/1/2020 4:55 pm : link
Looking forward to some hockey.

me too
MetsAreBack : 7/1/2020 9:13 pm : link
but something tells me Toronto'ians (word?) will have trouble social distancing and masking during Leafs playoff games... or playoff games period for that matter. Its a religion.