Here is the Mets pool: 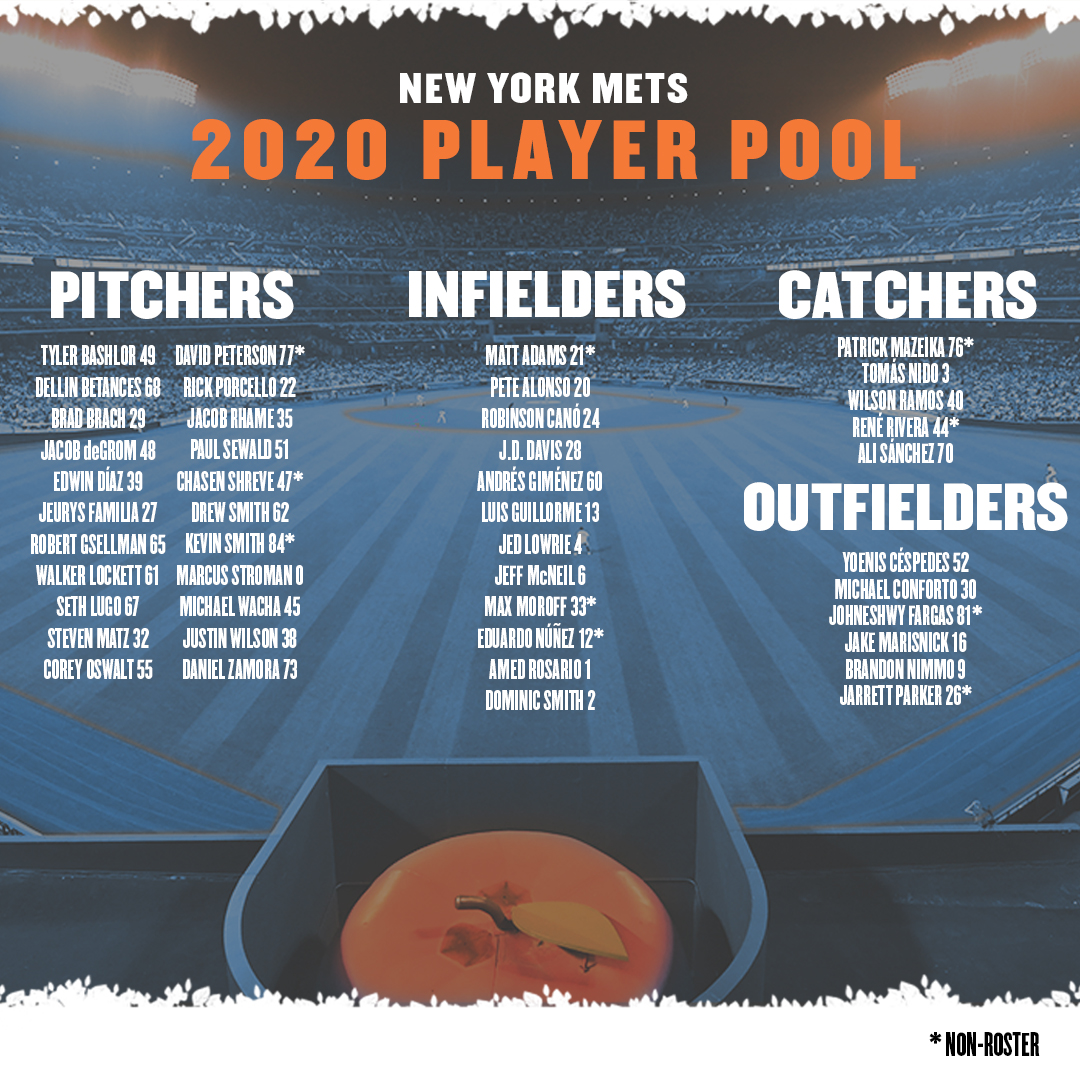 
Kilome hasn't thrown a pitch since October 2018 so he's probably very rusty. Not sure the deal with Gonsalves as he looked to be maybe their "next" SP up (mostly due to total lack of SP depth)
Humphreys
DanMetroMan : 6/29/2020 1:03 pm : link
hasn't pitched above A-ball (11 innings in A+) so he's not a surprise. Gonsalves is the one that sticks out for me.
2 month season I would hope
ZGiants98 : 6/29/2020 1:34 pm : link
Mets think outside the box a bit. If Betances, Familia, Diaz, etc. rebound or any combination of them do I hope they would consider Lugo in the rotation in a lost “throw away season”. Why not with Syndergaard out? Might as well get as many innings out of him as you can.


I know, my only thoughts though are with no minor league season, maybe get these guys some time with the major league staff. Though I guess Humphreys is a bad example.


Yeah, that is surprising. Pitched 5 shutout innings in the spring, for what that's worth. Probably going Ramirez above him in the pecking order.
He
DanMetroMan : 6/29/2020 2:20 pm : link
was never going to be approved (even as a part owner) but some twitter account is outing all of the racist shit Portnoy has said over the years.. YEESH. RIP any chances he had of getting approval.
Lugo in the rotation is an interesting idea w/ short season
Eric on Li : 6/29/2020 2:49 pm : link
probably need him in BP for the first month but if the rest of the group is solid around him, stretching him out over month 2 could make sense for postseason.

Short season and expanded rosters are going to be really fascinating in so many ways. Even someone like Gimenez could end up just being a really useful extra baserunner and defensive sub late in games. Probably not ideal for development but nothing is ideal this year.
I don't think
pjcas18 : 6/29/2020 3:04 pm : link
"unready" players playing in the majors this year (in any capacity - even as a PR) will hurt development.

It's not like they're being dragged away from every day AB's or games in the minors.


Anthony DiComo
@AnthonyDiComo
·
11m
-Yoenis Céspedes "should be closer to being game ready than when we saw him last in March," Brodie Van Wagenen said.
Wow lol
DanMetroMan : 6/29/2020 4:26 pm : link
Lowrie lolz wow. Mets hope Lowrie "continues to transition out of his brace."
All things considered
pjcas18 : 6/29/2020 4:33 pm : link
is Lowrie likely going to go down at the Mets worst ever free agent signing?


Castillo was a trade. he was re-signed, but they acquired him initially at the trade deadline, no?

Re-signing your own free agent shouldn't really count.
And Bay
pjcas18 : 6/29/2020 4:45 pm : link
broke down, the concussions were insurmountable, but at least (LOL) over three seasons Bay was a net positive fWAR.

Even Cuddyer (barely) was a positive fWAR.

Castillo blows them all away even if you count him, he delivered 2.0 fWAR.

Of course this year could change all that, but it's not promising.
.
DanMetroMan : 6/29/2020 4:49 pm : link
Anthony DiComo
@AnthonyDiComo
·
3m
Sounds like the Mets' intention is to go into the season with a traditional five-man rotation of:

They could still get creative with guys like Lugo/Gsellman in atypical roles, but that's not Plan A.
Hurts losing Syndergaard
pjcas18 : 6/29/2020 5:09 pm : link
with him in that rotation I think the Mets staff could go toe to toe with anyone.

Now....meh, need some breakout/return to better days from a couple people.
Lowrie
TyreeHelmet : 6/29/2020 5:18 pm : link
Did his leg fell off? There has to be more to this story...maybe something with injury insurance. What a weird story...

The back end of the rotation is really iffy. The Noah injury and letting Wheeler walk will really hurt.
war doesn't matter when you are talking sub-replacement level players
Eric on Li : 6/29/2020 5:51 pm : link
on the field any of them could have been pretty easily replaced by guys making league minimum. So the question is who was most overpaid. Castillo was a UFA when resigned, same as Cespedes who I'd also consider a bad FA contract separate from being acquired via trade, though he was obviously a much bigger positive than any of these guys because he at least led them to their only division win in the last decade plus a wild card.

It's pick your poison but Lowrie's contract was the least restrictive even though he will have ended up playing the least. In a weird way his inability to play makes his presence more favorable than if we'd been forced to give a bad player at bats (like Bay and Cuddyer). He was truly the definition of a paper transaction with minimal real world impact. The others hurt their respective teams on the field more just because they were on it more.
Whatever
pjcas18 : 6/29/2020 6:02 pm : link
not worth debating IMO, it's a shortest midget contest, they all sucked.

The fact that Lowrie has a chance to play in the least games makes the money all thrown away and it' true, I guess you could view that as a good thing, expect Lowrie was coming off a 3.6 fWAR season when the Mets signed him so going from that to 0.0 hurts.

Only Bay was coming off a better season. Still wonder if there were PEDs there maybe or just the benefit of the stacked lineup.

Tim Healey
@timbhealey
· 6m
Mets news: They have signed second-round draft pick J.T. Ginn, a source says.
.
pjcas18 : 6/29/2020 6:48 pm : link
Joe DeMayo
@PSLToFlushing
·
2m
Source: #Mets have signed 2nd round pick, RHP J.T. Ginn out of @HailStateBB
for $2.9 million (Pick 52 Slot Value: $1,403,200). 1st round talent who fell due to having Tommy John Surgery in March. #2 type starter upside with potential for 3 plus pitches. @MLBDraft
love mets signings with last 2 drafts
Payasdaddy : 6/29/2020 7:57 pm : link
hope brodie doesnt trade them away like Kelenic and SWR
2023 may have a nice young staff ready for majors
.
DanMetroMan : 6/30/2020 11:39 am : link
Major League Baseball has pre-approved seven groups as qualified bidders for the franchise, a person with direct knowledge of the matter told Sportico. The person was granted anonymity because the process is private.

The groups must sign non-disclosure agreements as part of the process, which includes access to a so-called data room that allows the prospective bidders to begin their due diligence.

Allen & Co. is overseeing the process for the Mets, who in December said they were in negotiations to sell up to 80% of the club to hedge fund titan Steve Cohen in a deal that valued the club at $2.6 billion. Those talks fell apart, prompting Allen & Co. to restart the process.