NFT: What's on your 4th of July Menu?

Grilling Dogs and Burgers and most likely Brats. Maybe some liverwurst with pumpernickel.

Home made Apple Pie with Vanilla Ice cream as well.

Going to a local German butcher...it's sort of like walking into Germany. lol

Check out the link below...
https://www.forestporkstore.com/products-sausage.html - ( New Window )
That place looks awesome
oghwga : 7/2/2020 12:59 pm : link
There's an old school kielbasa store in South River, NJ that has some great sausages, but nothing like that place.

The butcher I go to here has all locally sourced, farm raised meat and they make a few of the classics. All sausage is good.
I got 2 porterhouse steaks ageing in my fridge right now.
BlueLou'sBack : 7/2/2020 1:28 pm : link
Probably a "white roots" veggie puree on the side - potatoes, celery root, parsnip, turnip and garlic simmered in water for 30 minutes, then pureed briefly in the food processor with a glug of evoo and plenty of fresh ground pepper.

A big salad, and a batch of sauteed turnip greens on the side.

Easy peasy menu, nothing to stress about. I've got well sauteed sliced crimini and Shitake mushrooms a la proveçal already ready for garnishing the steaks.

Dinner is Sausage/Peppers/onions on rolls from Anthony & Sons Bakery(bread is key), Pork Ribs from Kansas City and Burgers.

Now lets hope the weather is ok here in NW NJ.
My menu: Wear a shirt showing an American flag overlapping the
Marty in Albany : 7/2/2020 2:48 pm : link
Declaration of Independence and let other people feed me.
Keeping
DG_89 : 7/2/2020 3:07 pm : link
it simple this year. Grilling burgers and dogs on Saturday then smoking ribs and chicken on Sunday. No fancy rubs just a salt sugar brine, salt and pepper seasoning, then smoking for 4 hours with post oak chips. Serving them with black beans and rice, greens and potato salad
St. Louis style Ribs,
barens : 7/2/2020 3:08 pm : link
Burgers, Coleslaw, and some grilled corn.


You must live in Denville or Mt Tabor area, Anthony & Son's is my go to when we come home to visit. The bread is amazing and buy in bulk to bring back home and freeze it. The market is top notch as well.
I'm combining
pjcas18 : 7/3/2020 8:04 am : link
a couple things, frogmore stew with Portugese clam boil. 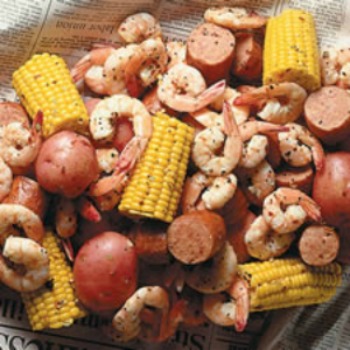 So,I'm keeping the old bay flavor of the Frogmore stew, and adding the second sausage so it will be andouille and linguica or chorizo and adding more seafood so instead of just shrimp, I'll have little neck clams, cherry stone clams, and maybe even some fish chunks. I call it Frogmore Seafood Boil.
I am doing a few thing’s this year
bigblue1124 : 7/3/2020 8:09 am : link
Buffalo basted rotisserie chicken, wagyu beef sliders, smoked brisket poutine with Q sauce and fried cheese curds, Fire & Ice salad, Grilled sweet corn, smoked campfire style black beans.
Having most of the in-laws and kid’s over this year only all of us have been pretty isolated with all that’s going on so wanted to keep it family only to be safe.
Hope everyone has a great day.
RE: I'm combining
section125 : 7/3/2020 8:24 am : link
In comment 14928267 pjcas18 said:


good luck having leftovers. Actually this year with a smaller crowd there probably will be some leftovers.
Just had a burger and a brat
Grey Pilgrim : 7/3/2020 7:11 pm : link
amazing!

I'm not sure what they do to their ground beef, but it's incredible.

Looking forward to a frankfurter tomorrow! The guy in line ahead of me ordered 20 of them! Yum!

:thumbsup:
Smoked Short Ribs
montanagiant : 7/3/2020 7:26 pm : link
And something I have never done before: Smoked Queso, bacon wrapped Asparagus and Peppers on the grill
I've got the next three days off, and a fridge full of meat.
smshmth8690 : 7/3/2020 9:39 pm : link
Breakfast tomorrow will be a seared hanger steak & eggs. I'll cook the eggs in the cast iron pan after I sear the steaks, along with a little butter.
I also plan on smoking two pork butt. Savory rub, with no sugar, with a Vinegar BBQ sauce. I also have some jumbo party wings marinating in olive oil, garlic, Worcestershire, apple cider vinegar & Frank's Red Hot. I will probably put a spicy rub on them, i've been using a rub called '8 Second Ride Carne Asada Seasoning' I think it will be really good on wings. Also making some slaw, using Duke's mayo, pretty surprised to find in here in NJ.

Happy 4th BBI
Section125 -
BlueLou'sBack : 7/3/2020 10:23 pm : link
Re the white roots puree, I began looking for a way to make a "mashed potatoes" style side dish that has lower carbs than the traditional, and started a few years ago doing 1/2 and half with turnips. In Israel where Jerusalem artichokes ("sunchokes" here?) are prolific I started making the dish in thirds from potatoes, turnips, and Jerusalem artichokes and liked it even better than the half and half blend.

I tried incorporating parsnips, but they simple weren't a tasty addition - in Israel. The parsnips themselves were rather tasteless.

Recently at a nice restaurant we were served a puree of potato, parsnips, garlic and celery root and it was fabulous, so I decided to duplicate it.

I like the spiciness and bitterness the addition of turnips brings, too.

It's funny, but depending where you are different vegetables can be better, or worse. The best example I can give for that is butternut squash vs banana squash. In the US, and particularly California, butternut squash is awesome and banana squash rather bland. In Israel it's exactly the opposite, banana squash is excellent and butternut squash tough and flavorless. Go figure.
Along with the steaks, white roots puree and sauteed greens
BlueLou'sBack : 7/4/2020 2:43 am : link
I have a quartet of salads already prepared: caponata, marinated roasted sweet bell peppers, marinated beets and cole slaw.
Chinese food!
Milton : 7/4/2020 5:50 am : link
It isn't just for Christmas anymore.
Dogs and Brats today!
Grey Pilgrim : 7/4/2020 3:19 pm : link
Steak Fries, Homemade Coleslaw, Corn on the Cob...