I was pretty nervous. Yeah we were at home, but those Vikings teams scared me with Moss, Carter, Smith, & Culpepper on offense. They had so much damn firepower. I remember being extremely worried that they would pick on Dave Thomas all afternoon. And then there was '97...which I was still scarred from when we blew the WC game to them. I might be off, but I believe the Vikes were favorited to win too.

Great day. Wellington's speech when we got the Halas Trophy was a FU to all the critics.


Culpepper wasnt a rookie.
Not high as I didn’t think we could cover their Receivers
LBH15 : 7/6/2020 6:43 pm : link
but Carter and company rolled over.
Scoreboard watching from the bench...
truebluelarry : 7/6/2020 6:50 pm : link
nothing will ever top the Jerry Jones expression on the sideline in the '07 Divisional Playoff, but this one comes pretty close: 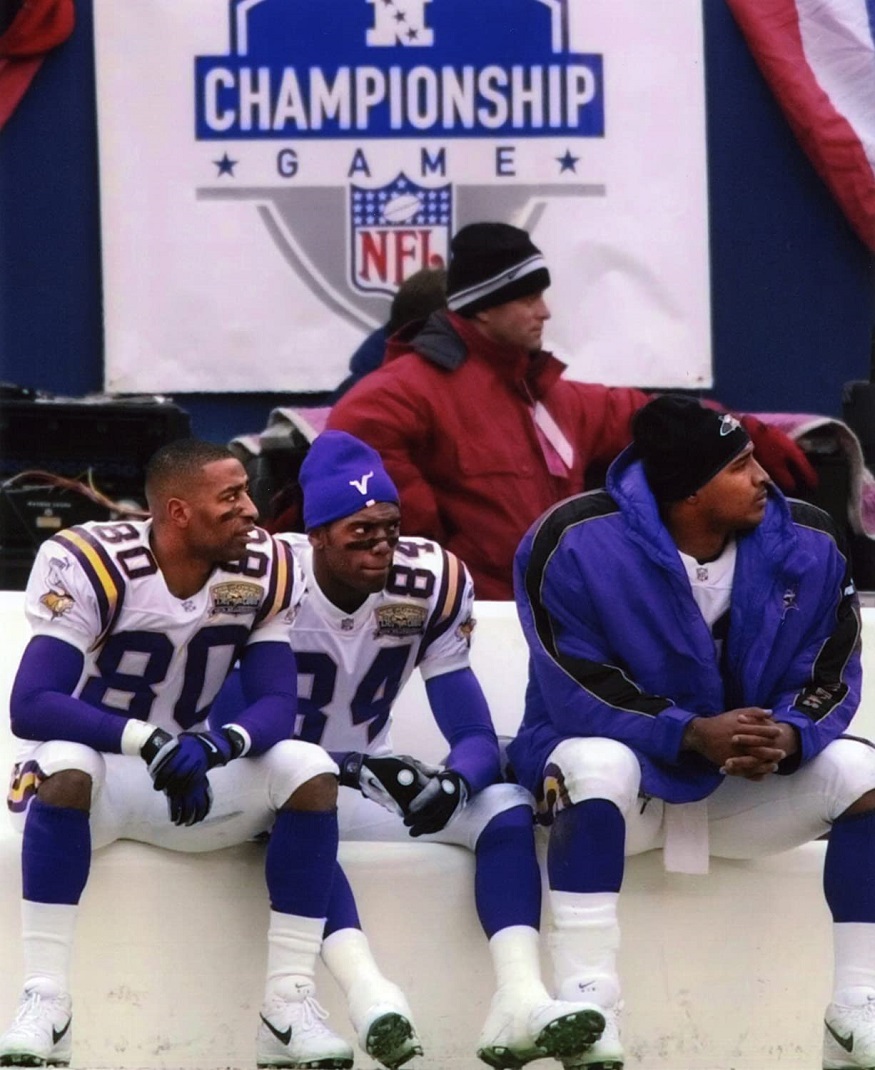 only playoff games in which I was
Enzo : 7/6/2020 7:03 pm : link
REALLY confident over the last 20 years were vs. the Falcons and Patriots in 2011.
A great memory for me
slickwilly : 7/6/2020 7:10 pm : link
was not just the game, but actually a few months later. At a Yanks Twins game at the stadium. Not going so well for the Yanks that night. Couple of Twins fans start getting a little to into their celebrations. I stand up and say 41-0, smiles are removed from their faces and they sit down and say nothing for the rest of the game. Haha good times.
I was worried going in....
JohnB : 7/6/2020 7:54 pm : link
when it hit 14-0, I figured that the game was over.
truebluelarry
SFGFNCGiantsFan : 7/6/2020 7:56 pm : link
Thanks for that pic. Classic image from that game.
i was worried but optimistic
GiantsFan84 : 7/6/2020 8:43 pm : link
vikings were a totally different team on the road and in the cold than inside the dome
I was 50/50 for the title game
montanagiant : 7/7/2020 1:48 am : link
But watching the pregame for the SB I was very skeptical. Seemed to me they were just happy to be there vs the Ravens
Basically, ending the season winning five in a row
BlackLight : 7/7/2020 2:02 am : link
then beating Philly, you sort of assume you're a team of destiny. So your confidence is usually irrationally high for a game like that.
Ok
Route 9 : 7/7/2020 2:56 am : link
I was just rolling with it, I guess. I thought the Giants would win the Super Bowl that year when the playoffs started. I remember not thinking about that Minnesota game as much as I should have. Maybe it had something to do with living in South Jersey and still enjoying a win over Philly in the playoffs the week before. Holy shit. The Philly trash talked SO much shit going into that game.

Most confident Giants game I went into was the week 17 finale vs. Dallas in 2011. No way in freaking hell they were losing that game.

I was in the parking lot around 9 am drinking and talking with various people and I’ll never forget the convo I had with some dude who seemed to know more than any common fan should know. First he said with absolute certainty that Robert Smith was not healthy and would be a decoy. Said forget the Vikings running game it’s going to be completely non existent. Said toomer is ok (ankle all week) but giants will use him early and often and won’t need him later as this game is going to get ugly and fast. Said the Vikings are walking into a trap and told me I’ll be celebrating by halftime. It’s gonna get ugly. This dude KNEW it.


Kerry Collins had an incredible arm and, given good protection, could make some incredible throws.

I thought we would upset the ravens. If it wasn’t for a horrendous holding call on “ the hammer “ that game could have turned out much better for us. Jessie armsteads pick 6 was called back on the worst call . A holding call on The defensive lineman ? Who wasn’t even holding. Would have changed the complexion of that game right around. 2000 NFC Championship though straight smooth delicious butter