Anyway, back to the loop. At the bottom of the stairs was a scale. You had to be a minimum of 130 lbs. I was like 120-something. However, nobody was at the bottom checking. When we got to the top the guy asked if I weighed myself. I said yes. He said okay. That was it. When I went down I didn't weigh enough and didn't gather that much speed so when I got to the top of the loop my back came off and just missed smacking my head on the lower part of the top of the loop. I just made it around.
Oh yeah!
Raultney : 7/11/2020 9:30 pm : link
I used to take my step-daughter there every summer after she got out of school.

I still have scars from the Alpine Slide.
Some tool wussed out on the "Expert" run, stopped his sled and didn't get off the track.

I had to steer my sled off the track or I would have killed the guy.

Took a couple of hits from the concrete on my arms and legs. Looked like a cheese pizza.

Got up, got ahead of the guy, put my sled back on the track and kept going.

Today, I never would have been able to get back on any of the "attractions." The "lifeguards" didn't bat an eye while I'm standing in line oozing pus.

Loved Traction Park!
Me and my buddy would go in high school
Payasdaddy : 7/11/2020 10:27 pm : link
Get completely stoned and do a bunch of stupid stuff
Good times
I survived that looping slide. No biggie.
Crispino : 7/11/2020 10:53 pm : link
I also survived the water mats that had a jump that if you hit it right you could overshoot the water landing and land on the rubber pad beyond it. They had stands set up at the bottom so crowds could watch the wipeouts. Dumb 14 year old me and my dumb friends would put on a show, wiping out to the oohs and aaahs of the onlookers. I also still have scars on one arm and one leg from the Alpine Slide. Burned the skin right off you. Good times.
RE: Doug, I have told this story on here a few times.
djm : 7/12/2020 12:46 am : link
In comment 14931987 robbieballs2003 said:


Incredible! I feel like I just encountered a Sasquatch.
I am very happy to say I never went
Matt M. : 7/12/2020 1:11 am : link
Any time my friends or camp went, somebody (or multiple people) came back with nasty cuts and scars. I seem to recall the Alpine Slide always being the culprit.
......
Route 9 : 7/12/2020 2:42 am : link
There was a HIMYM episode where Marshall is tempted by a job offer at an amusement park called Tuckahoe Funland. The place was shady and shut down years later because of deaths and outbreaks.

I always thought the show was making a reference to Action Park.
Dated a girl who worked the front gate in the 80's
gmangill : 7/12/2020 6:37 am : link
My friends and i would get in for free whenever she was working.. Great times, Awesome place wit awesome memories! A park of death run by Stoned and drunk teenagers. A high school kids dream come true!

I now live in Cape Cod... When i tell my co-workers about this place they look at me in disbelief. I usually have to tell them to google it just so they dont think i'm stretching the truth!

i definitely plan on watching the documentary.

Anyone who didnt go in the eighties to very early Nineties really do not understand just how out of control this place really was. Insanity and i loved it!
Add me to those with scars...
KingBlue : 7/12/2020 7:44 am : link
from the Alpine Slide. The attraction was that you really could go as fast as you wanted to. Therefore, every single day there were injuries.
I went once to Action Park.
johnnyb : 7/12/2020 8:01 am : link
I would have to guess late 1970s. The Alpine Slide is what I remember most, and how fricken dangerous it was. I had a head of steam coming into a curve and almost wiped out; how I didn’t really hurt myself is beyond me. The water slides were fun. But the place was a liability trap. Probably why it closed.
For those who that can't wait...
UAGiant : 7/12/2020 8:17 am : link
Sharing a relatively well-made video from YouTube that lays out the insanity of the park.

Its missing the production quality of what HBO is going to put out, but is a quick/interesting glimpse into what became more of an urban legend for those of us too young to have ever gone (and had a hard time believing it was really THAT bad).
Link - ( New Window )
I left a skin graft
Matt in SGS : 7/12/2020 9:08 am : link
on the Alpine Slide. And I remember watching someone dislocate their elbow on the tube ride when they came flying towards the wall and stuck their arm out to keep from killing themselves and their arms literally went 90 degrees the other direction. Pure insanity.
Talk about a blast from the past
bigblue1124 : 7/12/2020 9:42 am : link
I think I was 15 or 16 walking around with a can of beer tanked getting on that damn alpine and the kid working say's to me you can't go on with that beer. I handed it to him and went on my way. Crazy times and many scares.
seems like there's been all sorts
Enzo : 7/12/2020 10:13 am : link
of content related to this place in the last few years. There's also a book that just came out from the son of the guy that originally owned it. I went there a ton of times as a kid....from my parents taking me when I was young to my friends and I driving ourselves as soon as we were old enough. It was always just so much damn fun.
RE: I am very happy to say I never went
Enzo : 7/12/2020 10:53 am : link
In comment 14932019 Matt M. said: 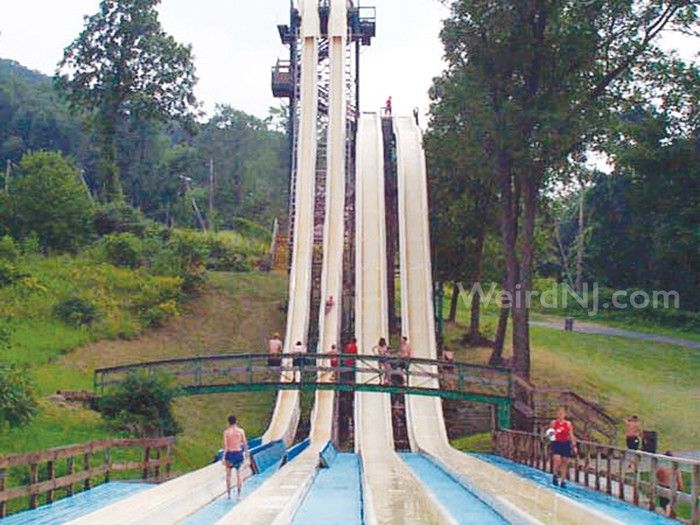 
Ha, the water mats. I was at the bottom and a chubby teenage girl in a bikini hit the water pocket and her bikini bottom came right off. Sweet.
the tarzan swing wasn't much
Enzo : 7/12/2020 11:42 am : link
of a ride, but it was great entertainment when you were waiting your turn. Either you were strong enough to pull your legs up or not. if you weren't, it was an automatic face plant.
the loop: what was the landing when you exited the tube?
ColHowPepper : 7/12/2020 12:39 pm : link
It looks kind of like a sand trap?

should have just ended the sentence after "me".

He does this all the time
Route 9 : 7/13/2020 3:57 am : link
He comes to threads to announce to us he doesn't do things or doesn't like going along with the norm. Even better, if he does something like play a video game or two he doesn't want to be looked at as too freakish in our eyes. Fuck fun, I say!
Great memories...
x meadowlander : 7/13/2020 6:34 am : link
...came home with carloads of bruises and abrasions multiple times.

That 5 story slide would always have a bunch of kids at the bottom waiting to see the bathing suits that would either get blown off or more often, driven deep up the ass of unsuspecting riders. Massive water wedgie.

That tall, multi lane water slide indeed had a pool at the end you could skim over if you pulled the nose of your mat up and if you didn't, massive wipeout, limbs flailing.

Great times. Dangerous Park. My wife almost died in that 'Grave Pool'.
Class Action Park
ColHowPepper : 7/13/2020 7:28 am : link
LOL to the OP. Bunch of stoned teenagers running a bunch of dangerous rides. What could go wrong? Get stoned, walk the high wire, slide down 300' drops, splash in spring cold water (the Yahoo clip didn't detail why the water was so cold, so I'm guessing it was spring fed). Sounds like a thrill seeking hoot and a physical blast, until something does go seriously wrong. robbie, you seem like one smart guy, what was the matter with you going in for stuff like that? LOL
RE: Class Action Park
x meadowlander : 7/13/2020 10:53 am : link
In comment 14932339 ColHowPepper said:
Was and still is fed with ICE COLD spring water. I think the Cannonball and rope swing are still there.

Frankly, I was surprised such a place existed even in the 80's. Remember joking that the place was a lawsuit waiting to happen. Little did we know, people were actually DYING?!

One time a friend of mine wound up on the 'wall of fame' of polaroids of injuries at the top of the Alpine Slide. Stoned, he had it wide open, as fast as it could go and he misjudged a turn, lost the cart and went down headfirst down the track with no shirt.

That track was 100% concrete. Huge abrasions on his chest, belly and forearms. What a mess.
The crowd cheering at the water slide
oghwga : 7/13/2020 11:13 am : link
Thought I'd imagined that. I have nagging injuries to this that I blame on that place, not my own drunken reckless behavior.

I still have issues with my neck from whiplash on the alpine and scares on my elbows but wouldn't change a thing.

An interesting thing I didn't know - many states instituted 21 as the legal age when Prohibition ended. Prior to Prohibition, many states didn't even have a legal drinking age. Then, when voting age was lowered to 18 in the early '70s, many of those 21 age states lowered their legal drinking age accordingly. NJ, for example, had no legal age prior to 1880. From 1880 until Prohibition, the age was 18, then from 1933-73 it was 21 before being lowered to 18 in 1973.
.
Banks : 7/14/2020 2:40 pm : link
I went there as a kid. My dad and uncle would take us. I had no idea of its bad reputation. I loved it for the thrill rides even if they kicked my ass. As I'm now a father, I research every place I take my little guy. Not sure if they didn't know or didn't care, but either way I have fond memories of that place