4th and 1. What Giants RB you taking?

For now, I'll nominate Rob Carpenter based on re-watching the end of that 1981 Philly playoff game not that long ago.

Jacobs converted some big ones (SB 42!) but he got stuffed a bunch of times as well.


Jacobs converted 63% of his 3rd and 4th down and short yardage attempts to 1st downs. 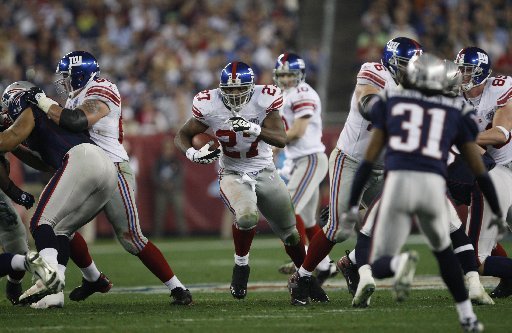 
He got 4th and 1 in SB42. That makes up for any other short yardage failures or issues for me. That said, my guy is Bradshaw.
Counterintuitive choice: Barkley.
Big Blue Blogger : 7/28/2020 6:01 am : link
To just get the first down, it’s ‘88-‘90 Ottis Anderson. But 4th and 1 is also an opportunity to break through a stacked box and take it to the house. So, unless the situation puts a premium on sustaining the drive at all costs, I’m willing to sacrifice a bit of conversion percentage for much bigger upside.

Charles Way would be my second choice, but technically speaking he was a FB not a RB.

I agree that we all used to complain a lot about Brandon in short yardage situations. I love(d) BJ, but he used to do this little hesitating tip toe dance before hitting the line that often caused issues in short yardage situations. The super bowl play was an exception and not the rule -- he powered that one. He had more power generally after gaining a head of steam on longer runs. HaHa I remember him trucking a bunch of guys after picking up a head of steam.


he would actually be near the bottom of the list for me. On those stack the box short yardage situations he was not as effective as you would think given his size. Did not have a nose for the soft spot in the line and hesitated too much
Morris. Brandon Jacobs proved size does NOT matter...
x meadowlander : 7/28/2020 1:54 pm : link
...Morris had explosion and ridiculous power for his size. Tree trunk thighs, outstanding drive and an absolute snake in short yardage.

Yeah, by the numbers Tony Galbreath gets the ball, LOL.

I believe Morris, Hampton, Bradshaw were the one's I'd be happiest to see getting the ball in short yardage.

Man, remember what Bradshaw was like his first 2 seasons? Tasmanian Devil. And he was THIRD string! That's how great 08' was!

Fingers crossed we get to see Saquon with a good O-line.

Prime Jacobs though...dude was really something to behold.
TIKI...
x meadowlander : 7/29/2020 9:30 am : link
...what many forget is that Tiki did NOT always have good O-lines - his cutback style exploited the blown-up-play, he was possibly the best I ever saw at finding secondary holes on plays and exploiting them. In short yardage, very common for the designed play to be stuffed, and he'd get 7 yards out of it anyway. Not a power back, but I was VERY comfortable with him in all situations. Best all-around back in the league for 2 or 3 years. Almost broke Marshall Faulks record without the benefit of ever playing with an offense of the caliber Faulk got to work with in St. Louis.
Charles Way
Spike13 : 8/1/2020 2:09 am : link
Bunch (Rookie)
Hampton
Morris
Bradshaw
Barber
I'll go with TIKI!
Grey Pilgrim : 8/1/2020 3:03 pm : link
Best GIANT RB in my lifetime!