Is this your big chance to share that.?
STFU
If Solder believes in God and he feels like this is the right choice for him and his FAMILY, then wish him well.

but I will make sure I pat you on the back for calling it if and when NS retires.
J884
CT Charlie : 7/30/2020 12:45 am : link
I admire the sincerity of your good wishes to Nate and his family, and I respect your conviction regarding what you perceive as the folly or fiction of religious faith. As someone who leans more towards Nate's outlook than yours, however, I wonder if there is anyone now dead who in some way influences YOUR life: a parent, a grandparent, the founder of a company, an artist, a musician - heck, Elvis or Kurt Cobain - a writer, a philosopher... If so, then you may want to consider that other people's point of view regarding their religion is not a difference in nature but in degree. To them (and I'll include myself), someone who walked the earth 2000 years ago apparently lived a life and death so important that his influence remains strong -- even immediate -- through the present day. I won't speak for Nate, but I hope you might reconsider the possibility that just as Bach or Hendrix or Mark Twain or Stan Lee "live on" in their music or writing, so too Jesus (or Muhammed or Buddha) live on in their words and deeds, and thus retain the power to change the minds and hearts of those who honor them.

I could say more, acknowledging the heinous misdeeds of religious zealots throughout history (from the Crusades to 9/11 and, sadly, so much more) and the appearance that many religious beliefs may appear no more substantial than "belief" in the Tooth Fairy, but I'll just leave it at that. If you can acknowledge that someone who is dead nonetheless continues to influence your life, then I hope that, even though you don't share someone else's faith, you'll at least entertain the possibility that they're not entirely delusional.


If you are an atheist, no need to hate on others beliefs. We all have our doubts and/or varying levels of religious standing. Nobody said anything about the "Holy Spirit" improving Nate's play.
RE: As a cancer survivor myself, I think this is a smart decision
LBH15 : 7/30/2020 8:40 am : link
In comment 14940809 jamison884 said:


Lovely. I will go with a brain-washed individual over somebody lacking one any day of the week.
INJURY RISK INCREASES WITH FEWER PRACTICES...
x meadowlander : 7/30/2020 8:42 am : link
...and with less training time.

Baseball is one thing - if MLB wants to go forward with a quasi-exhibition season or whatever 2020 winds up being for them, fine - but NFL is so much more intensive on players, keeping themselves at obscene and unnatural weight and strength levels for an entire NFL season - we've already seen the results of shortened offseason programs over time, the increase in NFL injuries indisputable.

I think it's reckless to go forward in this manner - barely any meaningful training camp, no preseason, they're just going to run with the bulls without enough preparation.


My thoughts exactly although you could add about 5 guys to that list.

I'm not that desperate to be entertained to risk the future of NYG for meaningless football.


As mentioned yesterday, Spotrac has updated its Nate Solder page.

The difference between that number and Duggan's number is two 2020 bonus numbers ($4M signing and $2.5M restructure) staying with 2020 accounting rather than being pushed to 2021.

Over the Cap has not updated Solder's page, but they have spelled out an accounting theory for opt-outs that appears consistent with Spotrac's numbers. You can find that at the outset of robbieballs' thread from yesterday.


I wish, CHP, but retirement won't eliminate the dead cap because Solder has the money and can rightfully keep it.

If I’m reading this correctly, if the season gets derailed at any point, the players that actually decided to play lose their game checks for whatever games are canceled and never get to make that money up? But if they opt out, their contracts are totally pushed back a year, meaning they lose nothing? If that’s the case, why would ANY player decide to play in this awful season? Something doesn’t sound right about that
RE: RE: ...
robbieballs2003 : 7/30/2020 9:47 am : link
In comment 14940989 BigBlueShock said:


There are more variables that go into it. Someone in Nate's situation will benefit from option out. However, lets say Barkley opted out. He is not at high risk so he doesn't get a vested year. That means he will be one year older beforr he hits FA and that could really hurt his long term value on a long term contract.

In Nate's case, since he is a high risk person, even with sitting out his year counts.

So, all these young guys on their first contracts that want to get a larger second contract it makes sense for them to play this year and hope they get the 6 games in or wha5ever they need to have this count as a year.


Don't blame you for reading it that way but it's not the case for Solder because his remaining salary is not guaranteed.


Nor roster bonus. I think just his pro-rated signing bonuses count.
shyster
robbieballs2003 : 7/30/2020 10:02 am : link
correct. The Giants were not going to cut Solder this year. They already gave him $3 mil as a roster bonus. People focus on the dead money for some reason. No idea why. You have to worry about the dead money when structuring a contract. Once the contract is signed it doesn't matter anymore with decision making. You look at how much cap savings you'll get when releasing a player and if his replacement can be had for that.

If the Giants released Nate before he made his decision the Giants would only save $3.5 mil. They were better off keeping him. You could argue that they could have saved $6.5 before giving him the roster bonus but that is another conversation.

Now, because he opted out the numbers change which almost all the beat writers keep fucking up. Now we get a cap savings of around $10 mil this year. I dont know if his $350,000 amount gets put in there along with a $100,000 workout bonus because of this offseason. But lets just say approximately $10 mil.


That makes sense.
Now that I am thinking about it.
robbieballs2003 : 7/30/2020 10:11 am : link
It may not be a guarantee he is released next year. If we are only saving an additional 7 next year we have to see where our OL is. Does Fleming leave? Is Peart ready? Did Thomas play well? There are a lot of questions.

Also, with the way the NFL is lately, teams are desperate for OL. It wouldn't hurt us to trade him. Of we traded him we'd save an extra 3 mil on the cap because his new team would pay the 3 mil of his guaranteed salary. I'd imaging a team would be willing to take that chance on him for a late pick. Even if we get a 7th, a trade benefits us way more than a release.

The biggest obstacle would be the money because of the cap next year. But a team can restructure his contract with only 3 mil guaranteed left on his deal so it would be very easy for both sides to want to do that. If traded, he count for 10 mil on the books for his new team. If you push back some of that money and get him under 10 for the year that looks like a good deal for another team.


My thought is that $3M in the OTC guarantee column is just a restatement of the 2020 roster bonus and that is why Spotrac shows a 2021 cap cut savings of $10M rather than $7M.

That means his $3 mil guaranteed salary comes from his base salary and hasn't been paid out yet.
sorry, I don't mean cap hit. I mean cao savings.
robbieballs2003 : 7/30/2020 10:42 am : link
I keep using that interchangeably.
...
Eric from BBI : Admin : 7/30/2020 10:46 am : link
Dan Duggan
@DDuggan21
Wasn't easy getting to the bottom of the cap implications of Solder's opt out (the league is still finalizing a lot of these types of details), but here's my understanding with a handy chart showing what his contract looked like pre-opt out and now: 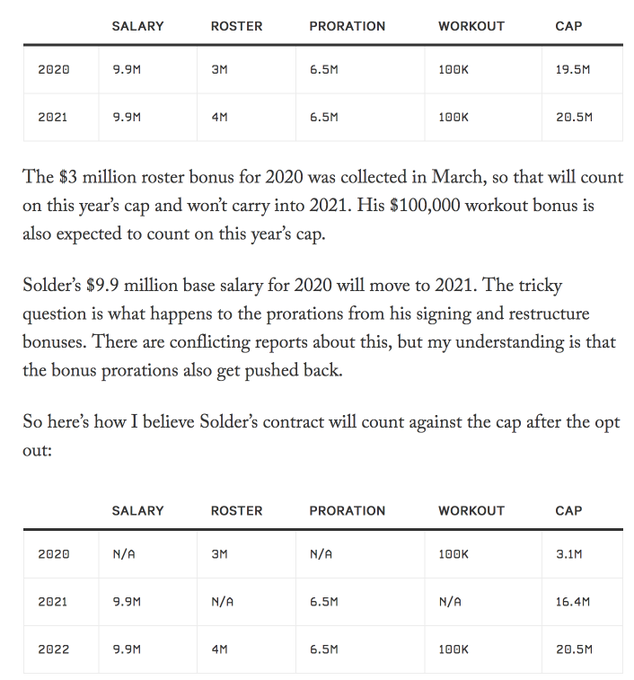 
I'll have to think about it more but my initial reaction is that, if you cut a player after paying him a roster bonus, that could be included in the dead cap, which, added to the prorated bonus, would reduce the cap savings accordingly.

If he actually has guaranteed salary remaining, then Spotrac's numbers are not right.


The $6.5M dead money that he will count for 2021 if Spotrac's numbers are correct, come from the $4M prorated signing bonus and $2.5M prorated restructure bonus.

If Duggan is right that more bonus money is pushed to 2021, that would increase the 2021 dead cap but could still not be retrieved.

The terminology I am reading is they are calling it a 'pause', if the player opts out. So just pushing the contract back a year.
Solder has been dealing with his son's issues since his birth, and they had another child recently too.
I do hope for the best regarding his son.
I read he was going back to Boston on Tuesdays
last year, for his son's chemo treatments.
Best wishes to him and his family
islander1 : 7/30/2020 11:32 am : link
I'd have made the same decision. No brainer really.
RE: J884
joeinpa : 7/30/2020 11:32 am : link
In comment 14940920 CT Charlie said:


May be the case but, as of the moment, we don't have an updated Solder breakdown from OTC that poses a clear conflict with Spotrac.

His roster bonus is above an beyond
Very little chance Solder ever plays for Giants again
Vanzetti : 7/30/2020 1:16 pm : link
DG converted 5 million of 2020-1 salary to a signing bonus to get under cap. Solder already received his 3 million roster bonus 2020

That’s 8 extra million. So why would he play with all the uncertainty? He could wind up going through training camp and getting zero if the season is canceled. He could catch Covid

Converting 5 million to signing bonus was dumb. It was already clear Solder had slipped and likely would be cut after 2020. He would have been cut after this year if not for the dead money

So they made a dumb move but then caught a break with his opting out because they gain cap flexibility
This will prove beneficial in the long run
Vanzetti : 7/30/2020 1:21 pm : link
Gets the young guys on the field playing their natural positions


I guess it wasn't clear to everyone.
This is a good thing
GiantsFan84 : 7/30/2020 1:59 pm : link
He’s crap as a player. They already have Fleming as a stop gap. Maybe peart gets some real reps this year. And they now are better positioned moving forward w the cap

Bonus money is not being tolled like base salary at all. It will be paid, or has been paid already, and still accounts against the cap.

If he's not brought back in 2021, the Giants will only be responsible for ONE YEAR more of bonus money.