Rangers and Canes were rusty on specials (though CAR looked much better), 1 for 14 combined on the PP. Good intensity though, hard hitting game. I thought Hank was great.

I didn't see any of NYI vs FLA, but the score is about what I'd expect from a Trotz team.

PIT came out like a house on fire, Price stood tall and MTL's two youngsters, Kotkaniemi and Suzuki have the Habs with a 2 - 0 lead. momentum is starting to shift to MTL, but PIT can score quickly. MTL defense is a massive Achilles heel.

These teams hate each other. I guess any team with Tom Wilson gets hated on by every other team though.

Vegas beating DAL 1 - 0 in a West conference round robin game.
TBL
pjcas18 : 8/3/2020 6:51 pm : link
with the shootout win
Washington/ Tampa Bay
Route 9 : 8/3/2020 6:52 pm : link
was a solid game. Majority of these games have been a good watch. Feels like NHL Playoff hockey, except for the Rangers two turd performances. I do not get why anybody would be excited for the future regarding this team. They're pathetic...

Drouin turned it over twice on the PP, both bad, once in his own zone.


12% shot at #1 pick? Cut them some slack ... Carolina is a good team, the goalie has been ‘unfit to play’ And they’d been playing good hockey up until the shutdown. It’s disappointing but shit happens. Hopefully Carolina loses next round so we get two decent draft picks
Canadiens
pjcas18 : 8/3/2020 9:47 pm : link
5th penalty of the game.


It’s still early. Cautiously optimistic but this isn’t a bubble right?
It helps 8 teams are leaving this week. But there is still risk if one of these cities starts to see a rise in cases
Pens
pjcas18 : 8/3/2020 10:50 pm : link
ice it with the ENG.


Yeah, and I get a little worried there might be some complacency and people get lax.

I don't know how the "bubble" apparently works.
MAB, Have you seen the areas around the bubbles?
pjcas18 : 8/3/2020 10:58 pm : link
it's actually a pretty cool set up. I'm not even sure a local flare up would get in, possible I guess - they're all humans, but I think the controls are solid. And being away from your family sucks for the players but Toronto looks cool. 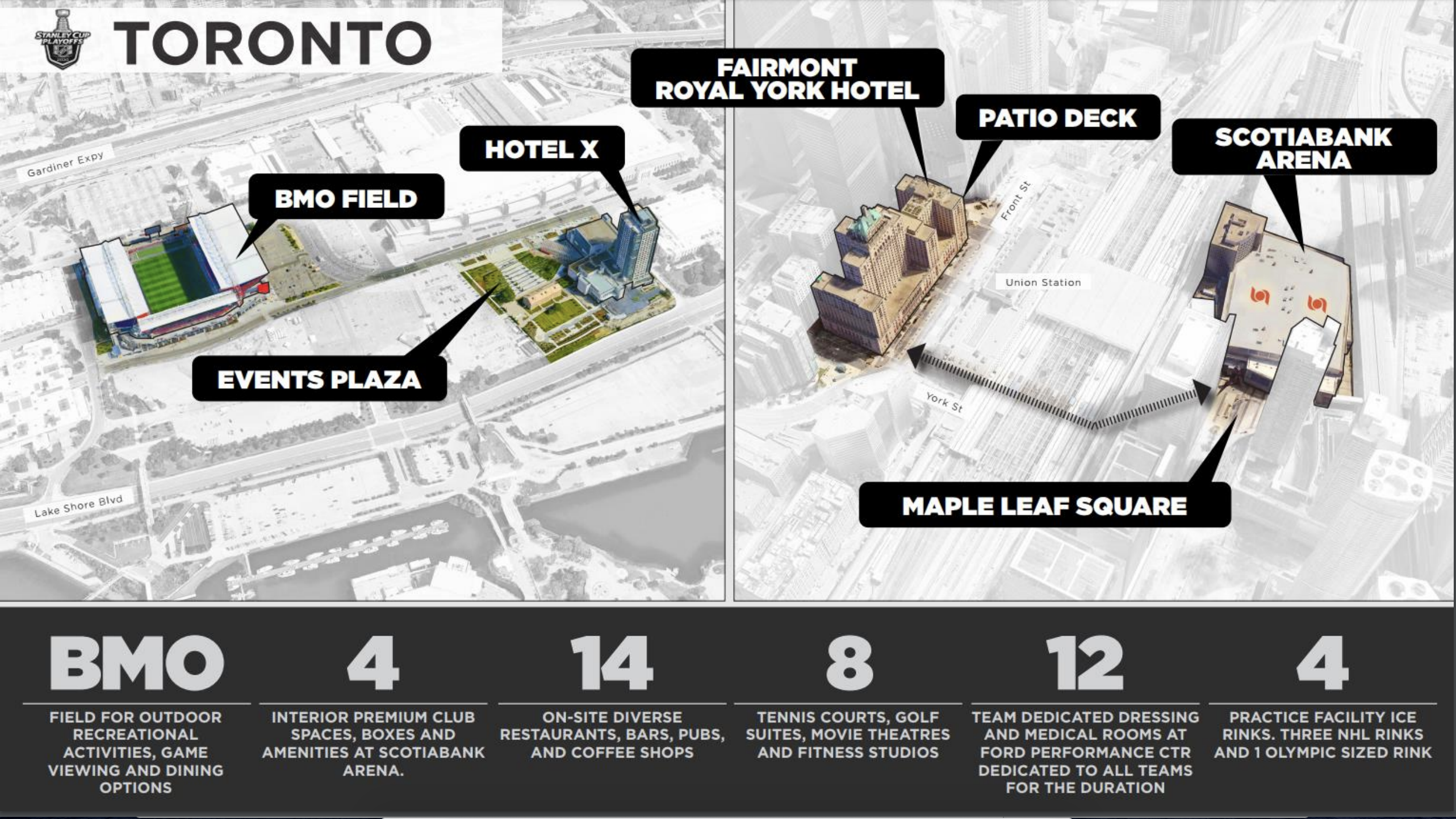 
There’s two bubbles, Toronto and Edmonton.
I listened to an interview
pjcas18 : 8/3/2020 11:00 pm : link
with some Bruins players (Joakim Nordstrom and one other) and he said it's not bad, and actually pretty fun. Said he was walking out to the soccer stadium to kick the ball around with some teammates and then they were going to go out to dinner and play video games.


My wife just asked if they were lonely or something. I just laughed. I’m sure they miss going out and all that but they’re playing for the Cup. Hockey’s just different from other sports. Always has been, always will be.
RE: MAB, Have you seen the areas around the bubbles?
MetsAreBack : 8/4/2020 12:05 am : link
In comment 14943498 pjcas18 said:


Thanks - I should read up. Is it like the nba when if they leave the ‘bubble’ for any reason they have to quarantine for days and security inside the bubble is off the charts? It certainly helps toronto and edlmonton at this point don’t have general population virus out there like so many American cities but seems like there’s a little more freedom for players to be well ... 25 year old kids... then what the nba has set up.

I could be wrong, like I said I haven’t researched. They’ve certainly been smarter than mlb which has scheduled road trips with multiple days off on those trips for teams. Cards had two days off in Minneapolis last week
And Florida had a lot of time off during preseason games in Atlanta and people are shocked guys got bored? It’s like no one consulted common sense.
....
BrettNYG10 : 8/4/2020 12:08 am : link
I don't see how baseball or football pull it off.

Hockey/basketball, you can have guys buckle down for two months to finish the season.

Then they always suck ass in the playoffs. Oh, wow. They went on one run and lost to the Kings.

I mean don't ya think they looked lost and slow and didn't look as if they belonged on the same ice as the Hurricanes? It's not as if that was the 2000s Devils defense out there. Skjei never played this hard as a Ranger.

Hey at least the young kids got some "playoff experience".


This link outlines it in a consumable manner.

Similar NBA rules I believe for leaving the bubble:

* Potential elimination game
I always am a little skeptical
pjcas18 : 8/4/2020 10:03 am : link
with lists that say Carey Price is still "the best goalie in the NHL" but that's consistently what the players say - or they have him the discussion. Mainly I'm skeptical because statistically he hasn't been among the leaders in a while, but his defense is so bad.

but these past two games have given me some confidence that he *can* be that goalie.

As an Isles fan
Mike in Long Beach : 8/4/2020 10:09 am : link
It's actually super encouraging to see Varlamov in the middle of that list instead of at the top. He stopped 27 of 28 shots, which one would think would catapult him into at least the top 5, but he's still sitting with a middle-of-the-pack ranking.

To me, that means the defense did a phenomenal job in game one of assuring the shots Florida managed were very low percentage opportunities, and for all their faults, Florida is a team that can score goals.


Exactly, a Trotz team hallmark, they don't take a lot of shots, and they try and limit high danger opposition chances (as opposed to shots). It's so smart, a bad shot at the NHL level is almost a turnover or in some cases it is in fact a turnover.

which is why xGa is more meaningful measure than save %.

I'm not a huge analytics guy, but I do strongly believe all shots are not equal and relying on pure shot data isn't very meaningful.

Bob has been keeping Fla in the series but they're hanging him out to dry.

Good win. Rebounded from an awful first. They finally adjusted and stopped trying to force the carry in.

Hot streak Eberle would be most welcome on a sniper starved team.

Super fortunate re Barzal. Game over if their one elite player goes down.
First gaem of the day, BUT
Diversify yo bonds : 8/4/2020 3:03 pm : link
Ice near the boards was abysmal from the start. Absolute ping pong ball near the benches.

This much action daily it must be a moonscape out there.

if Beau was consistent in his production he would be an absolute monster. He is so impressive when he's "on".