And it should also be pointed out that it was planned and started construction during a huge real estate boom when construction costs were through the roof. That was a big factor in its cost compared to stadiums built a few years later after the bubble burst (NYC metro area being another cost factor).
As long as Woody Johnson is happy
NoPeanutz : 9/14/2020 9:29 am : link
this is the Giants fan's priority.
I would guess The Giants
mpinmaine : 9/14/2020 9:32 am : link
will have a new stadium by 2030-35..

..but wtf do I know?
Would have liked to see it on the West side
fuzzy : 9/14/2020 9:36 am : link
The Jets original plan would have been for the stadium where Hudson Yards was constructed. I would have loved to see that although granted I'm not a frequent game day visitor (every 5 years or so) so not a tailgater. Instead of the anodyne experience that provides no home field advantage think of what could have been. A great scene like during the Big East tournament on steroids supported by mass transit. Quintessential NY setting. Missed opportunity IMO.
Scyber
UConn4523 : 9/14/2020 9:40 am : link
absolutely. They broke ground in 2007 during peak real estate and construction prices, and then continued to build through the crash of 2008/9.

$1.5B apparently only gets you an ugly concrete bowl in NJ
Look MetLife isn’t inspiring
djm : 9/14/2020 9:49 am : link
I’ll admit that. But it’s a friggin football stadium not the Parthenon. It could be worse despite what some of you may believe. Giants could have moved to another city. Sacrilege you say? Yeah we’ve seen the browns move to Baltimore. We’ve seen this very franchise move from NYC to jersey. Don’t tell me teams like the giants can’t move far far away. They have before just be grateful they are here for the long haul even if they play in a giant can of bumblebee tuna.
RE: Would have liked to see it on the West side
fireitup77 : 9/14/2020 9:53 am : link
In comment 14969466 fuzzy said:


The Jets wanted to build their own stadium on the west side. Under that proposal the Giants would have built one at the meadowlands by themselves.
Manhattan real estate is too valuable
JonC : 9/14/2020 9:54 am : link
I didn't and don't believe it was ever gonna happen there, especially when you look at Hudson Yards now and the money it generates and will continue to generate as it grows.

Before long some a-hole will want to get rid of the High Line segment there in order to develop more.
Allianz Arena
jestersdead : 9/14/2020 10:01 am : link
I had no issues when with it when I read an article that said the outside was going to be similar to Allianz Arena, multiple light options on gameday, etc. It is nowhere close to looking like that.

I haven't been to a newer stadium to compare the sight lines from the upper tier, so I cannot comment on that. 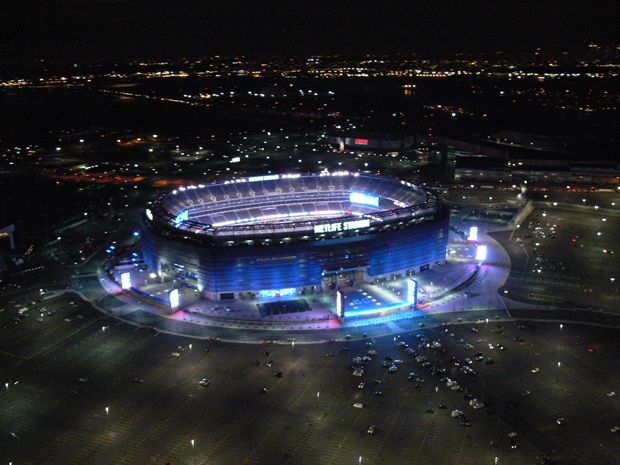 ...
christian : 9/14/2020 10:08 am : link
The owners of the Chargers and Rams are worth roughly twice the owners of the Giants and Jets. Sofi Stadium cost a whopping 5B dollars, including nearly a billion dollars in loans from the NFL. And despite the headline the stadium is privately financed, the developers are midway in lobbying for major tax breaks. That on top of PSLs.

I’m not phased by MetLife either way, but when fans get pissy about the stadium I always remember Mara didn’t go the corporate welfare route and bilk the state to build a stadium.
MetLife has support pillers
NoPeanutz : 9/14/2020 10:10 am : link
blocking some sightlines... exactly the kind of supports that Giants Stadium built 50 years ago did not have.
re. the Allianz lights. As my buddy pointed out- they paid $1.7B to build the whole thing, and got cheap on the lights.
SoFi..
FatMan in Charlotte : 9/14/2020 10:13 am : link
didn't just cost $5B. To put it in perspective, it costs over TWICE as much as any other stadium.


After I climbed the Empire State building during its tower/stairs race, we climbed Hudson yards the next day around 5 times. What an exquisite structure that is.
I don't get the hate for MetLife.....
BillKo : 9/14/2020 10:20 am : link
.....its a football stadium. You're watching football the entire time. Or at least you should be.

All of this is true, but MetLife was mediocre even when it was built.

Usually a new stadium has at least a short reign as the most cutting-edge stadium in the league, until the next one is built. MetLife entered in the middle of the pack, at best.
They had to build a state of the art
Captplanet : 9/14/2020 10:38 am : link
stadium in LA, the fans don't exist there so the teams have to make the stadium "the place to be". Say what you want about the Jet's and Giants, but we are football fans above all else. We don't need sushi bars and dance clubs in Metlife, we'll go to a game and drink Natty Light in the parking lot and eat peanuts out of a bag. Los Angelos needed a stadium that would attract the fairweather fan because that's all that they have for a fan base.
METLife is not in the same
Simms11 : 9/14/2020 10:51 am : link
ballpark (pun intended) as those other stadiums. It’ll be another 20 years before they even consider a new one here. With that said, METLife is not terrible. I’ve been to quite a few games and concerts there and enjoyed them all. What will make METLife shine is more championshipS and playoff caliber football IMO.
Nice new stadium!
trueblueinpw : 9/14/2020 10:56 am : link
I wonder who will play there when the Rams leave?
RE: Nice new stadium!
djm : 9/14/2020 11:12 am : link
In comment 14969608 trueblueinpw said:


The first part is hogwash. No team in a million years is moving away from NY market and if it was someone it would be Jets. Makes zero sense on any level.

Second part absolutely agree. A stadium in an area that is supported by mass transit is going to have drunker louder fans. Seahawks have that going for them and the whole atmosphere of getting off ferry and walking to stadium a mile away is a fantastic experience. Kind of reminded me more of a collegiate atmosphere.
RE: I don't get the hate for MetLife.....
Bernie : 9/14/2020 11:55 am : link
In comment 14969551 BillKo said:


I agree with this. But I think the sight lines are great and could care less about everything else. So SoFi looks cool. So what? Same for Mercedes-Benz Stadium in Atlanta. Jerry's World looks cool as well, but the gameday experience is not great. Candidly if you are even with or above the video board, that's what you watch, not the live action. In addition, comparing open air stadiums to domes is apples and oranges. I don't hear anyone singing the praises of Levis Stadium in San Francisco as compared to these new domes.

Except that air quality, oh my.
I can't believe 5 billion with a B for that stadium, wow.
Did I hear them say last night that Met Life cost more
than Jerry's palace in Dallas?
MetLife is an uninspiring
PaulBlakeTSU : 9/14/2020 12:18 pm : link
cold, boring stadium. That it is at the upper level of stadium costs is a bit embarrassing. Last year I went to US Bank (the Vikings new stadium) and it is beautiful. Blows away MetLife. I can't comment on Raiders, Falcons, Rams, Cowboys as I haven't been there.

It has no life. No vibrance. It's just a boring, bland, cookie cutter football stadium.

It's also a pain in the fucking ass to get there. Probably why I've so seldom actually gone.
I was in the "it's just a football stadium crowd"
The Dude : 9/14/2020 12:28 pm : link
And then went to dallas. gameday experience DOES matter.
it would seem better if
Kevin(formerly Tiki4Six) : 9/14/2020 12:29 pm : link
they actually won some games. The stadium has been filled with other teams fans due to how bad this franchise has been run.

NYG had a Franchise QB with 2 SB MVP's, they destroyed his prime and back end of his career.
Why is anyone surprised
arniefez : 9/14/2020 12:51 pm : link
that a stadium built by John Mara and Woody Johnson is a sh*thole.

It takes a special level of incompetence to screw up a golden goose monopoly the way John Mara has.

The genie is out of the bottle. It will never go back to the way it was before PSLs and it's one thing to rape your generational fan base for pure greed. But it's a whole level up to rape them for a building that's a horrible game day experience and an embarrassment compared to the rest of the league.

Even Woody Johnson had the sense not to charge PSLs for the upper deck in that dump. You can barely see the numbers on the players jerseys from that high above the field.

2) That said, in comparison to other stadia from a similar timeframe (and prior) Met Life sucks.

3) The comparison to Allianz is a good one. It is an embarrassment that the "different colored" lighting is nothing more than colored shields that have to manually be swapped out to change colors. How was this not LED lighting?

4) That is one basic example. There are so many others.
I will say this for MetLife
allstarjim : 9/14/2020 4:12 pm : link
Having been there and to Raymond James here in Tampa, I greatly appreciated the wide throughways to walk. In Raymond James, you get bottlenecked and takes you 15 minutes or more just to get past the Pirate ship to the other side of the stadium, AND you can't go down and skip a level because they won't let you back up. It sucks.

At MetLife, I could get where I was going...so that might not be exciting, the visuals aren't knocking your socks off, but for me, I appreciated it.
I'd have a higher opinion of Metlife...
Racer : 9/14/2020 4:32 pm : link
..if I could remember the last time I left the building in a good mood.
I will give MetLife a compliment
aimrocky : 9/14/2020 4:50 pm : link
I've seen games in a few of the "newer" stadiums (Tampa, San Francisco, Philly) and MetLife is practical and convenient compared to those others. Having all levels connected in a circle makes navigating through the stadium very easy. Entering and exiting the restrooms is easy and food and beer lines are never that long. If you're willing to park in satellite lots. traffic in and out of MetLife isn't bad. Sure, it's ugly, and I don't like how most of the corridors are closed off to stadium viewing, but for this season ticket holder, the novelty of frills would wear off and, over time I would prefer functionality. MetLife is very functional.
RE: MetLife is an uninspiring
Bernie : 9/14/2020 5:10 pm : link
In comment 14969750 PaulBlakeTSU said:


I think you are a little off on your cost estimate for a retractable roof. This issue was widely debated during construction. The high cost was a sign of the times, especially the cost of steel.